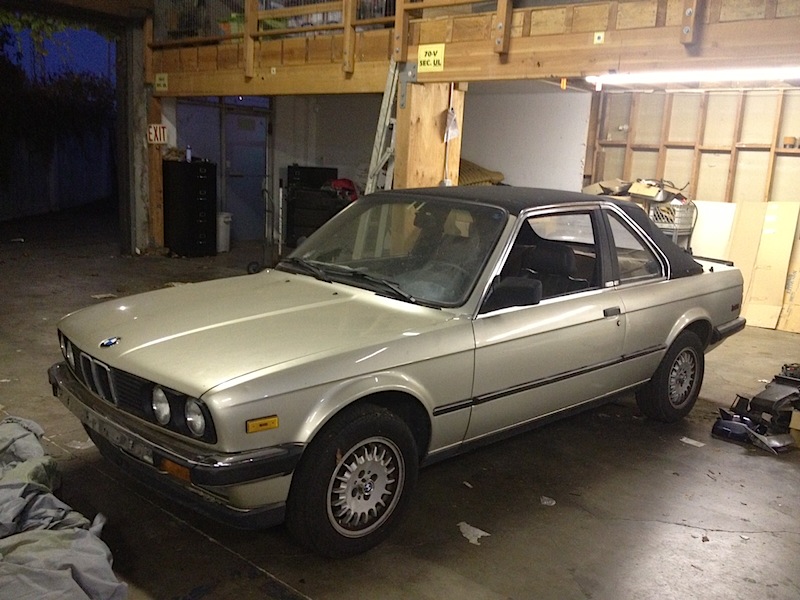 “Foot on the pedal, never ever false metal.
Engine running hotter than a boiling kettle.”

The wisdom of driving a 30-year-old BMW across some of the more desolate areas of America first came into question as we watched Sparks, Nevada fade from the rearview mirror, casually but rhythmically vibrating in time with the four bent wheels.

With all due respect to the Beastie Boys – please don’t sue us – the engine was thankfully not running hotter than a boiling kettle. No, the little 2.3-liter six-cylinder never moved the needle much passed 12:00 on the gauge, behaving just like a good E30 should. In fact, for close to 2,000 miles over three hot days in the wide open heart of This Great Land Of Ours, the 323i just purred along.

Our plan, which admittedly made a whole lot more sense in the planning phase (aka – while drinking at home in Minneapolis), was hatched in April after the Bronzit BMW found its way into my life while on vacation in California. I had recruited my good friend and fellow propeller head, Mark Pedersen, to pilot the car home to Minnesota after truck shipping rates almost doubled overnight.

Mark and I flew out to San Francisco the morning of July 2, arriving around lunchtime. After a short ride north to Marin County, we met up with my old friend Bill Arnold, eponymous proprietor of the world-famous Bill Arnold Independent BMW Repair. And it is world-famous. You can look that up.

Not only was Bill instrumental in bringing the Baur into my life, he and his team also whipped the car into shape for its journey east. Details make the difference when you’re road-tripping in a car that has been dormant for a year and a half with a broken timing belt. In addition to a rebuilt head – 323i-specific, naturally – and a vetting of all subsystems, Bill put together a cache of tools and idiot-bastard-engine-specific spares such as a distributor and ignition wire set, and an engine computer.

Nathan Walton of Bay Street European was also kind enough to loan us some additional small tools and a head-mounted flashlight, with the promise we’d be seeing him in Minnesota sooner rather than later. We’re holding you to that, sport.

The only things we needed to do upon arrival were visit friends and make sure the 12-volt outlet worked, which it did.

We spent Wednesday evening with Bill and Tammi Hull at their home consuming beef and alcohol, while attempting to assemble one fully functioning gauge cluster from two donors. Getting all the instruments to work – and work together – proved vexing. Finally, the next morning, Bill checked the body wiring harness connector next to the fuse box under the hood. There was mild age- and dormancy-related corrosion, and a liberal application of contact cleaner brought the cluster to complete life. After having two extra keys made at an old-fashioned locksmith and then feasting at Jack In The Box (“I think two breakfast burritos was too much.”), we were on our way, caravanning to Sacramento with another old friend, Jake Whitfield.

Jake is not only responsible for my irrational love of Baur E30s, but is also the source of my former 1981 BMW 528i, which now – coincidentally, or not – resides with Mark. See the synergy here? 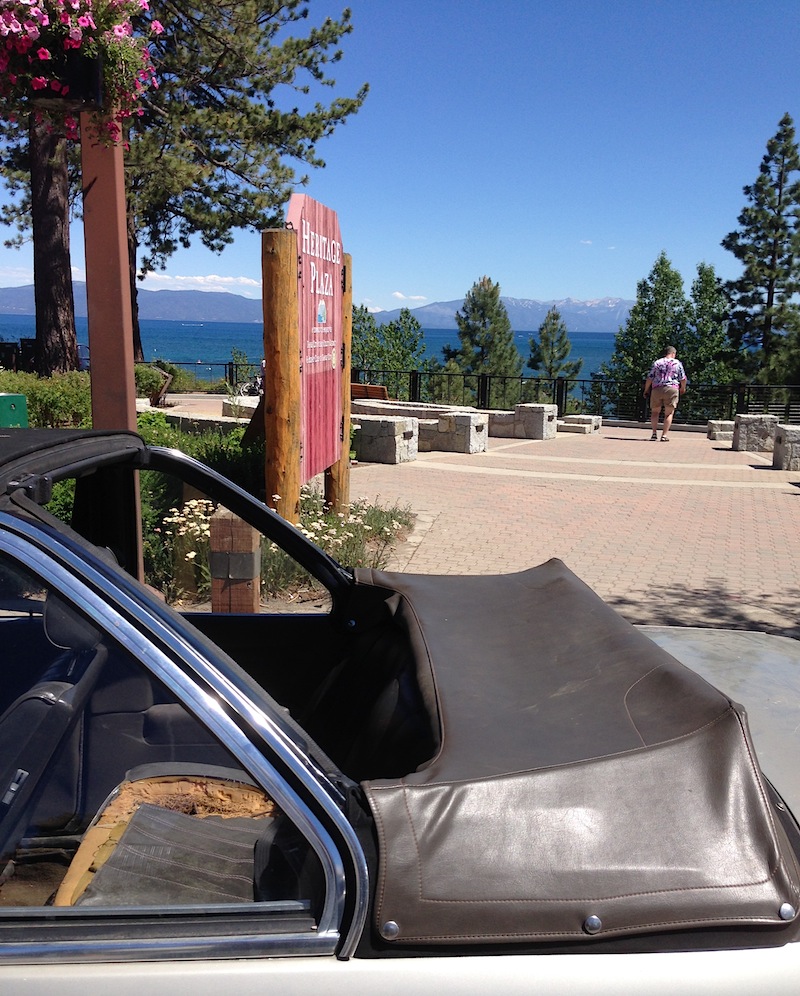 Being a holiday week, it took forever to get through the extended San Francisco Bay Area traffic and Sacramento. Bouts of 80 mph were punctuated hard with panic stops and cars randomly falling off the road. Welcome to California driving. Including a one-hour detour so Mark could witness the splendor that is Lake Tahoe, we wound up hitting Reno, Nevada several hours later than planned. That left a long burn to Park City, Utah, roughly 45 minutes on the wrong side Salt Lake City.

There’s a lot of nothing between Reno and Salt Lake. It’s beautiful, and it’s wide open. There are trains to look at, and prisons. Elko, Nevada is… somewhere in there, a little town with stunted, grown-up aspirations. There’s usually a speed trap set up by a friendly state revenue enhancer on the way out of town, which our trusty Valentine 1 alerted us to. (Several years ago, my father fell prey to this trap. We laugh about it to this day.)

At night, you see the glow from Wendover long before you see the actual town. It’s the last gambling gasp before crossing the border and dropping onto the salt flats of Utah. On that note, it must have been hot that day in Mormon country, because the run from Wendover to Salt Lake proper reeked of low tide and ancient rotting organisms.

We pulled into my cousin’s house in Park City at 2:00 AM. 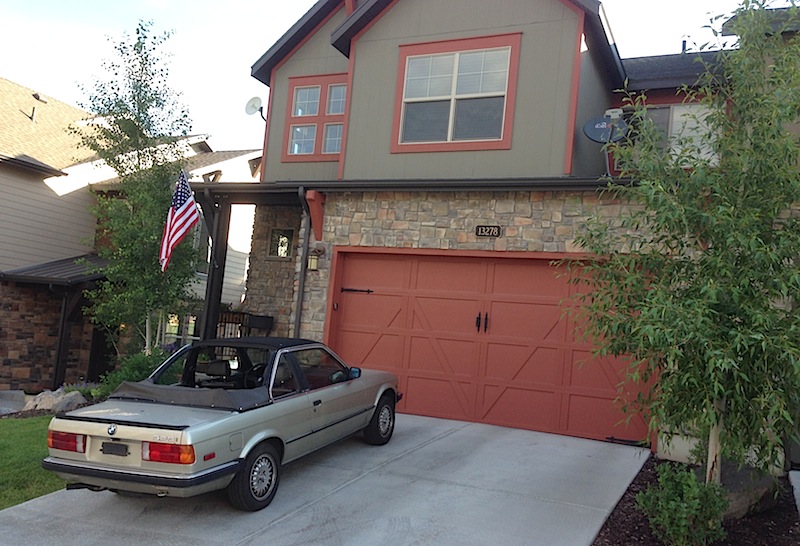 Friday morning we had a wonderful breakfast with my family. The whole clan came out to see the two road-burned freaks in the 30-year-old BMW. As morning rolled into early afternoon, we debated the merits of hanging out for the rest of the day and then grinding home Saturday and Sunday. Compelling as it was to vegetate the day away, we piled back in the Baur around 1:30, heading east at a quick pace. For the drive, we had epic road snacks – courtesy of my very-health-conscious cousin Elan and his better half Kate – consisting of Caprese salad, fire-roasted vegetables, a crusty baguette, and some other goodies. Sure beats a bag of truck stop trail mix.

We hit rain in Wyoming. Big, dark rain, the kind that washes away entire herds of cows, leaving a beef gap in the space-time continuum. We were delighted to find that, with the door windows up and the center roof panel in place, absolutely no water landed in the cabin, either front or rear. Even the tonneau cover stayed dry at 80 mph, and the tires – best described as black, round, hold air – never wandered or threatened to spit us into the nearest available ditch.

We were originally going to drive to Rapid City, South Dakota, so as to avoid Nebraska. However, my wife Chris had been on the phone and found that all 58 hotels in Rapid City were sold out. Who knew it was such a happening place on July 4th? I mean, it’s not that close to Mt. Rushmore, is it? No matter. Because she’s a rock star, Chris had secured lodging for us.

The good news? It was a suite at a Holiday Inn Express.

The bad news? It was in Nebraska. North Platte, to be exact.

The other bad news? No goddamned minibar.

Heading to North Platte added a couple of hours to our day. However, one advantage to driving across the flattest of America’s flat lands on the Fourth of July is you can see small-town fireworks blowing up for miles all around. Combine that with nature’s brilliant display of heat lightning, and you couldn’t ask for better seats to a better show.

We landed at the Holiday Inn around midnight, catching up to the douchebag from Wisconsin in the black Suburban. He freight-trained passed us in the left lane at something approaching triple-digits, and about a foot off the bumper of the car in front of him. For the record, his three kids were assholes, too.

The next morning, Saturday the 5th, we headed north out of North Platte. For most of the day, we ran on fast, wide farm roads, off of but between I-80 and I-90. This proved brilliant, and a much more pleasant drive; several cool towns but not enough to impede fast travel, lots of interesting farmland to look at, no construction, and minimal traffic. The Baur was happy here, able to run and bend comfortably into the long sweepers.

It really is a beautiful country we live in. If you can get off the highways and onto the byways, I highly recommend you do so.

We stopped in Valentine, Nebraska for lunch at the Bunk House, a very local joint. Mark had a burger I openly coveted, until my sirloin steak sandwich arrived. Really, it should have been posted in the menu as, “sirloin steak, sandwich material” because there was no way the two mincy pieces of Texas toast on the side were going to stand up to 8 ounces of cow likely cruising the pasture that very morning. With crinkle-cut fries to soak up the gore, we were again happy to have foregone the usual fast road food. 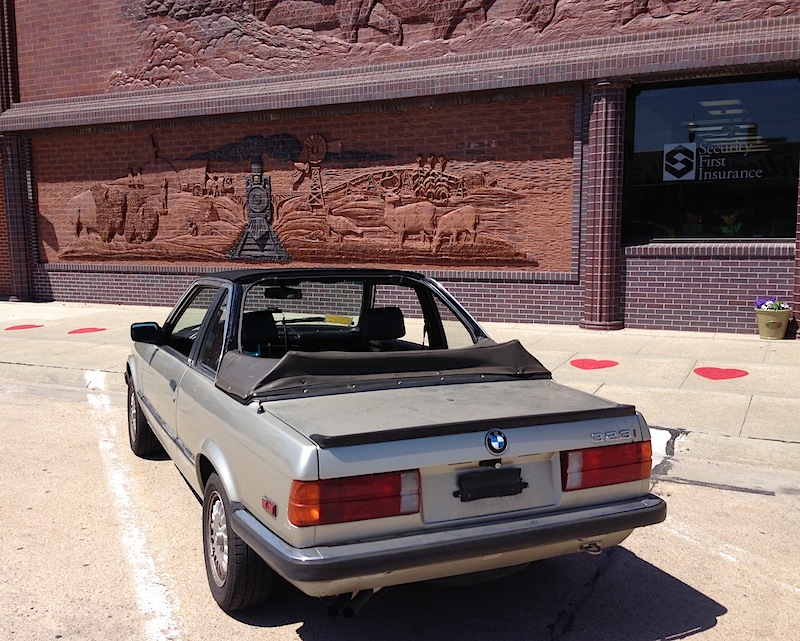 As evening fell, we picked up I-90 in Sioux Falls. A couple of hours later in southern Minnesota, we ducked onto a smaller highway – 169 – that basically took us to my backyard in Minnetonka.

The Baur is… amazing, really. A testament to the inherent goodness of BMW’s E30 chassis, this example – sitting for a year and a half after the original owner’s teenage son let the timing belt go snap – never missed a beat. Granted, that was due in large part to the preparation it received. But it still transmitted the vibe that it wanted to live, wanted to go start a new life.

We covered 2,000 miles, give or take. We got 30 mpg at an indicated 80 mph, and 27 at 85-90. The engine used no oil. We drove with the center roof section in place but the back folded down, and the car was actually very civilized, especially with the front windows up. Parts of the gauge cluster stopped working for about 40 miles outside Sioux Falls, probably just to mock us. Other than that, the car just worked, and worked really well.

Stay tuned for updates, which may happen later than sooner since I’m happier behind the wheel than in front of the screen!

Heartfelt Thank-Yous must be stated here, because none of this would have been possible without:

Totally That Stupid – Car Geekdom, and a little bit of life. 1985 BMW 323i Baur Top Cabriolet: No Sleep ‘Til Hopkins
Loading Comments...
%d bloggers like this: