The San Francisco, California, public auto auction is not normally the place to discover a classic Mercedes sedan. Generally run across the block are tatty donation cars like battered Ford Escorts, crispy Nissans imported from rusty states, or smoke-belching Saab parts cars that will not pass the state’s Draconian emissions inspection.

Occasionally something interesting gets consigned, like a clean Porsche 914 or 1980s Maserati Quattroporte, but the reserve is always full retail. My friend Jake and I would always keep our eyes open for the rough gems, but more routinely found the generic garden boulders.

We think the color was originally Sand Beige. However, being a California car it had almost no paint remaining. The chocolate-brown interior sported faded but intact wood. All the fiddly trim was there. The chrome inside and out was even nice. Everything opened and closed with a satisfying German click. Rust? Please, this was California.

Jake called over a lot monkey attendant with the key board. The car started eagerly but, having been shuttled around the auction, clearly wasn’t running on all eight. It belched no smoke from its slender chrome pipes, but the exhaust smelled sticky rich.

Everything seemed to work; electric things moved and whirred, the brake pedal had feel, and although we could not actually drive the car the transmission seemed to engage forward and reverse. Of course, it had absolutely no fuel in its enormous belly, and the tank reserve light fluttered delicately in the warm sun. 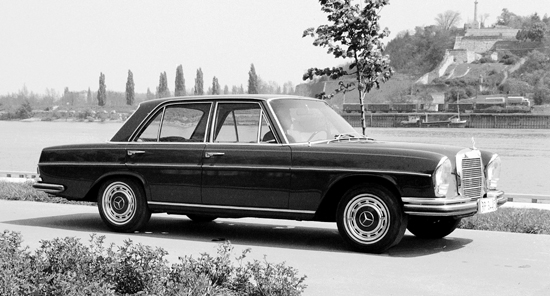 “Well,” we said to each other, “It’s straight, has no rust, it runs, and it’s complete.” This is the siren-song of buying a completely unknown old car.

The 280SE’s turn came on the block. Virtually nobody cared, and those who did lost interest quickly. Jake scored the car for less than $1000.00, including fees.

Being a BMW-centric lad with no Mercedes experience, Jake was afraid to drive the car so he tossed me the keys. “Why not?” I thought. “I’ve got the paperwork and a AAA card. What can happen?”

Puttering through downtown San Francisco, I immediately liked this car and could feel its soul. It drove like a larger, more stately version of my 1972 BMW Bavaria. The steering had no play and the brakes did so strong and straight. Even with it’s cosmetically-challenged appearance, it had a presence passersby understood.

This 280SE didn’t want to be an auction rat; though it had no known history, it clearly wanted to again be someone’s pet.

Coughing and belching through traffic, we headed north. Leaving San Francisco, after crossing the Golden Gate Bridge, there is a long uphill stretch called the Waldo Grade. After observing the fanatically-enforced 45 mph limit on the bridge deck, I romped hard on the accelerator. The 4.5-litre lump bogged a little, coughed one last time, and let out a mighty woof. Then something amazing happened: it kicked down two gears, picked up its skirt, and proceeded to rocket up the hill like something uncaged.

Five miles later at the gas station, the motor idled smoothly with good coolant temperature and steady oil pressure. By this time the fuel talk reserve light was solidly on.

After tanking up, which I think I wound up paying for, I gave the keys back to Jake and told him to take his car home and enjoy. Which he did, for three months before selling it to a fellow who restored it.