Like many of us, I was indoctrinated at a very young age into the Cult Of Car by my father. He probably didn’t even know he was force-feeding me the Kool-Aid. Regardless, I’m pretty sure my first word was ‘car.’ Which is good, because it could have been a lot of other things.

If it was the weekend, Dad was wrenching on his Fiat 850 Spider to better the chances of completing his 100-mile round-trip commute from our home in southwestern Connecticut out to Long Island, NY come Monday. It wasn’t so much the Fiat was unreliable. Rather, when you have 850 cubic centimeters of Carlo Abarth’s rage on tap, it’s best to keep it in fine fettle. 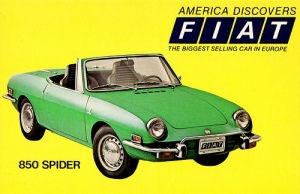 Wrenching next to him on his own Fiat 850 Spider was Dad’s best friend, Woody, whose son Reed would become my best friend. Woody had a shorter commute, but his reasons for fiddling were essentially similar; they were Fiats in Connecticut. So much so, in fact, that Woody’s eventually broke in half.

Meanwhile, Reed and I were performance-tuning our tricycles.

Assuming his Fiat was happy, Dad might be playing with our Datsun 510. This green 1972 station wagon was Mom’s grocery getter. Some of my earliest childhood memories include sitting on the floor of the back seat area playing with my Matchbox cars on the rear seat cushion while Mom ferried us to Burger King. Hey, it was the 1970s. Seatbelts were something that happened to front seat passengers.

The extended Bush clan had many Datsuns, including 510s, 610s, the occasional 710 and 810, and Roadsters, but strangely no Z-cars. Dad’s brother Jerry and my oldest cousin Elan kept the fleet running for that end of the family.

Throughout my teen years these guys all worked on cars. Elan and Jerry had a couple of Roadsters, a 610 wagon and an 810 coupe. Reed and Woody moved on to an Alfa Romeo Spider and a Mercedes-Benz 300SD Turbo that had belonged to jazzman Benny Goodman.

We still had the 510 wagon, but it was largely a garage ornament by then, a victim of my failed attempt at a restoration leaving the body a sculptural medley of 2x4s and bondo and the fuel system feeding from a gallon jug wedged under the hood. Dad and I would still work on my VW Rabbit Convertible and his own Datsun Roadster, two better, running examples of our actual abilities as shade-tree mechanics.

As time went on, more and more of the cars they had to lay hands on fell by the wayside. In 1990 Jerry traded his 1985 BMW 735i 5-speed in on a Lexus LS400 and never looked back. As he put it, once the 7er had fully funded the local BMW dealership’s new showroom, there wasn’t much point in keeping it. That, and my Aunt drove it through a deer at 75 mph. 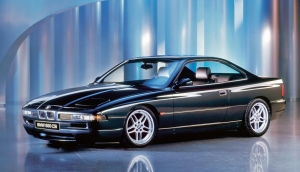 Jerry toyed with buying a BMW 850CSi several years ago. We talked about the history and significance, as well as the care and feeding, of such an animal. I did some searching around and connected with a guy in southern California who had a stunning Lagunagrun-on-Parchment example, with low miles and all the paperwork. In the end Jerry decided he didn’t care enough about a car he would have to pay attention to, and we scrapped the plans.

Somewhat recently, Elan had a couple of Volvo 240 Turbo wagons. He tried to get his son and daughter into it when they decided they wanted to learn about cars. Once the kids moved on, so did Elan. The projects went away, and these days he rolls in a 2007 BMW 335Xi coupe.

Woody flushed the 300SD once the electrical system started going sideways, which is odd for a W126 Mercedes. It was also developing some nasty rust because, despite living out its final days in Virginia, its early years were spent in Connecticut and New York.

Woody now drives a Toyota Tundra four-door when he and his wife Linda aren’t using their Lexus LS460. Woody still wrenches on his yard implements, and builds the type of furniture you’d typically find at ultra-high-end home-furnishing stores. Indeed, he created the wood trim for my 1972 Bavaria from Birdseye maple using some old pieces as patterns and shear acres of talent.

Dad still has his Roadster. He drives it in the nice weather and wrenches on it as necessary, which isn’t very much because it’s not British. I think the last items to fail were the clutch master cylinder and the battery, and both of those were several years ago.

A few summers ago my parents were visiting and Dad helped me replace a trunk hinge on my 1972 BMW Bavaria. Replacing said hinge isn’t so bad. Reinstalling the trunk torsion bars is that bad, and worse. A symphony of anger and profanity severe enough to set off the local tornado sirens. Still, Dad was into it, happy to lend a hand.

Now we have the next generation coming up. Reed spins the spanners on weekends, and his young daughters are showing an interest in garage endeavors. My own son is a little young at two, but he’s already showing great progress, at least in taking things apart. 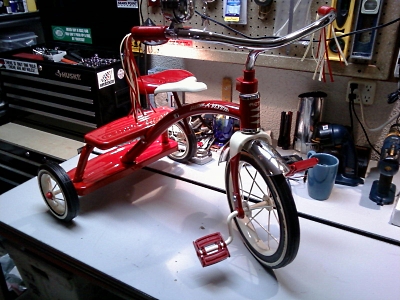 And he’s got a shiny new tricycle begging for upgrades.

Totally That Stupid – Car Geekdom, and a little bit of life. Of Old Men And Old Cars
Loading Comments...
Comment
×