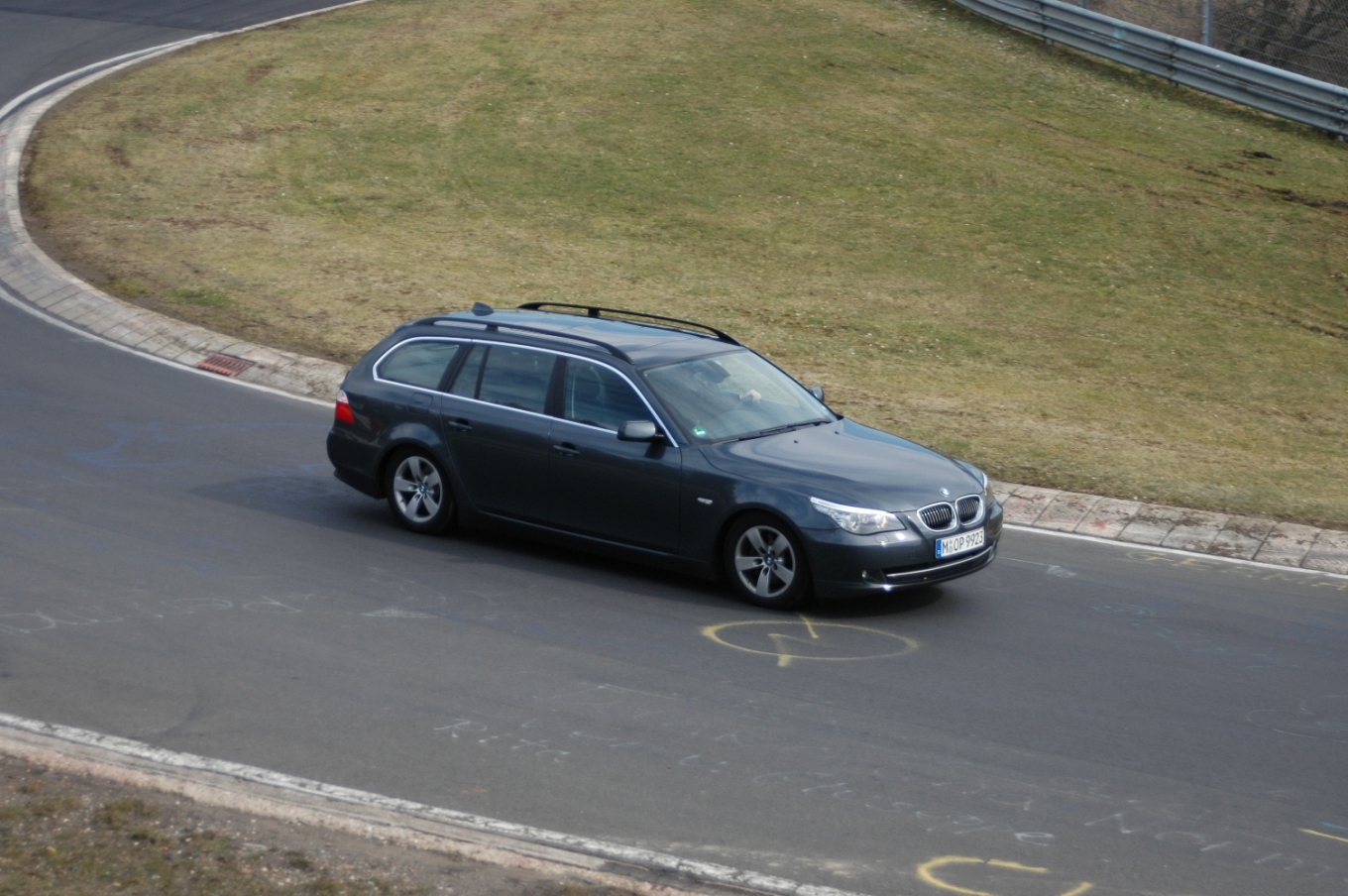 As I get older, I remember less and less. But I remember vividly Tuesday, March 27, 2007 – the day I first drove the Nürburgring. I flew in to London’s Heathrow airport with a 6:00am arrival, where I met up with the editorial team from Mercedes Enthusiast magazine who picked me up in style in a then-new W211 Mercedes E500 sport, and we headed east with me at the wheel. On the wrong side of the car. On about two hours of sleep. We hit the Eurotunnel train to Calais, and drove from there through the farms of Belgium and France and on to the quaint little German hamlet of Nürburg situated in the Eifel mountains. “Quaint” save for one little thing: the Nürburgring.

The ‘Ring, as it is known by those who frequent it, opened in 1927 as part of Germany’s, umm, progressive road development program and was an important part of their effort to dominate most everything, including automobile racing. Today’s Nürburgring, however, consists of two circuits, so we are going to focus on the original: the Nordschleife: just over 16 miles consisting of 40 left-hand bends, 50 right-hand bends and almost 100ft elevation variation. That’s the one you can pay your Euros and drive in a very cool and old-school “run what you brung” sort of way. And that’s just what we did then, and you can still do today.

I was insanely fortunate to have a ‘Ring veteran in the co-pilot seat on my first trip – then Editor of Mercedes Enthusiast and now a big wig at Pistonheads, Dan Trent. We paid our ticket money and decided to hit the track. I admit that I was crazy nervous. I’m not a track guy, I don’t do driver’s schools, and I don’t own a helmet. No, I am just a car guy who likes to drive street cars on fun roads and I have to tell you, this is the most fun of them all. 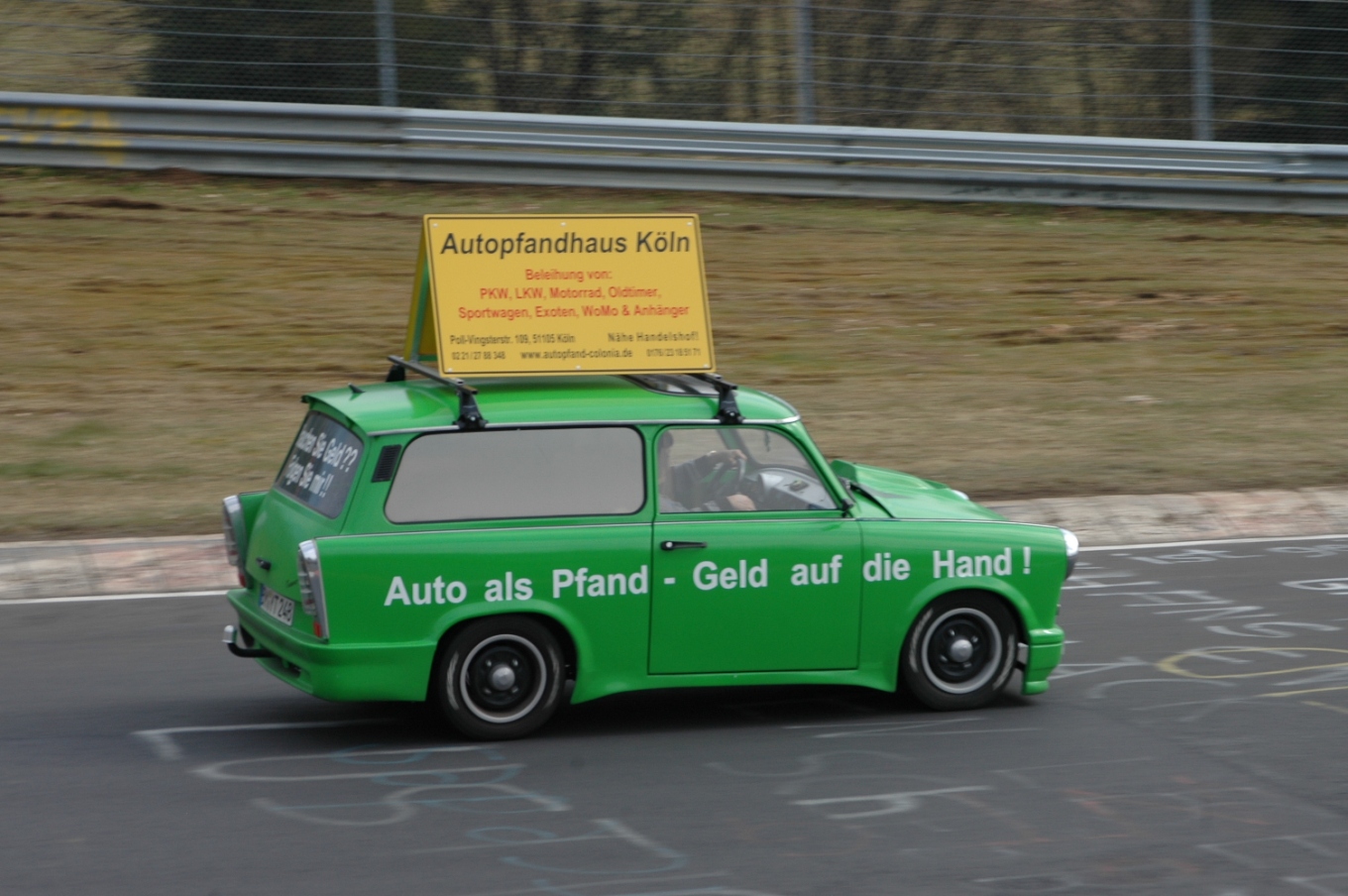 I recommend starting any trip to the ‘Ring as a spectator. Find a good vantage point and just watch and listen. I was amazed at the kinds of cars making rounds of the track during the open public sessions – everything from Porsche GT3s to Eastern Bloc panel vans with something to sell – something in German that I couldn’t read.. Nonetheless, I found it valuable to get a flavor for the kind of cars and drivers we’d be running with.

After spectating for a bit, nerves building with every passing minute, we headed-over to the main staging parking lot, walked through checking out the “competition”, and made our way to the ticket booth. I don’t recall what the per lap cost was in 2007, but for 2012 the price is €26 with discounts for buying multiple laps at once. We bought our tickets, strapped into the car, and hit the road. Dan talked me through the process expertly (“big dip here”, “full throttle”, “BRAKES!!”, “follow your line”,etc.) and pointed-out to me the dots that appear periodically around the track that help guide newbies like myself in a tried and true line through the track.

You enter the track through a toll gate manned by Nürburg’s finest, and it’s more than just a little disconcerting to see the line of ambulances standing by waiting for you to mess up. From there you ease onto the track through a series of orange cones, and then boom: you’re driving the Nürburgring. For those who (aren’t supposed to) time their laps, the timer starts when you cross under the first bridge and keep going until the gantry within sight of the visitors center. Ten minutes is generally considered a good lap time. Faster is better – but you must take care to follow the rules of the road – most importantly to keep right except to pass. It is also important to know that the rule of the ‘ring is that if you break it, you bought it. That is to say that drivers are responsible for the expense of cleaning-up their own accidents. 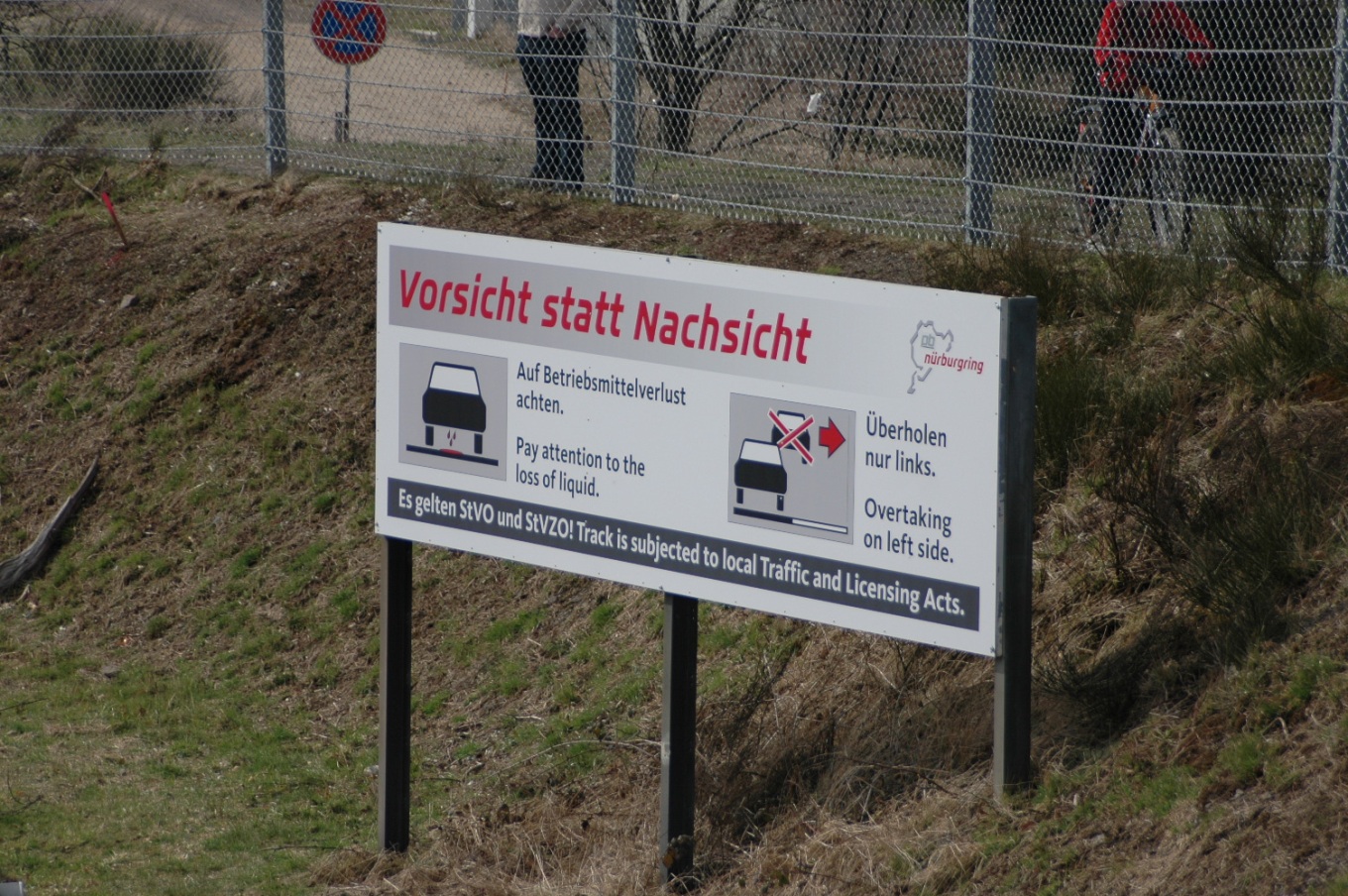 Despite the length of time it takes to complete a lap, the trip is one big adrenaline rush and is over before your know it. Until you’ve familiarized yourself somewhat with the course, it is a neverending back-forth-up-down-TURN that really makes you appreciate what automakers mean when they promote the fact that they tuned the chassis for the (insert car here) on Germany’s Nürburgring. A few easy tips to remember are to 1) drive your own line, and not that of the car in front of you (right, Jonathan?) and 2) to hold the car down in the Karussel (right, Dan?). That second one nearly eliminated the whole editorial team of a magazine, with me at the helm. At speed, the car wants to pull out of the banked section of the track. Shame on you if you let it. 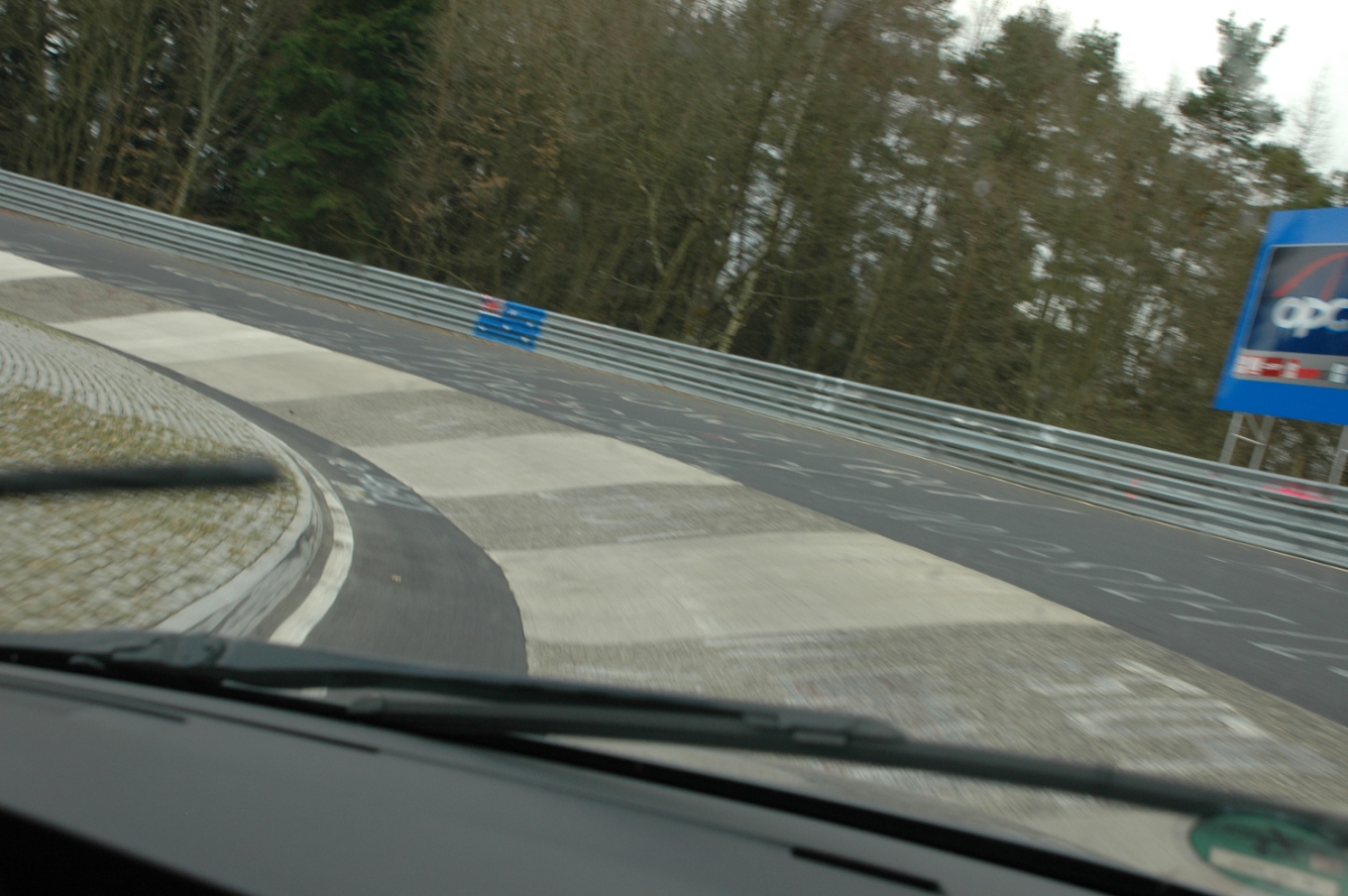 Half the game in driving the ‘Ring is equipment: what you drive. On that first trip we were fortunate to have a press car that didn’t (to my knowledge…?) have any restrictions on use. I had heard horror stories about guys watching the track and reporting back to rental car agencies about their cars making laps and the drivers being subsequently banned from those agencies. So on my second trip (with TotallyThatStupid co-conspirator Jonathan Bush) I scoured the contractual fine print from all the rental car companies, settling on a European outfit who had nothing in their contract remotely related to track use. That trip we ended-up in a 2008 BMW 525d wagon – a quick modern-day diesel only slightly let-down by its suspension. For the record, I have been banned for life from Sixt Rent-a-car. No kidding.

There are other options besides taking your chances on getting spotted by your rental agent. There are a few outfits that rent cars at the track, ranging from the utilitarian to the outright exotic – but you definitely pay for the privilege. There is also a company that rents out kitted-out old Alfa 75s (Milanos to us Americans) for running around the ‘Ring. The ambitious may also consider buying a car of their own to either use and re-sell or to send back to the States after you’re done with it. 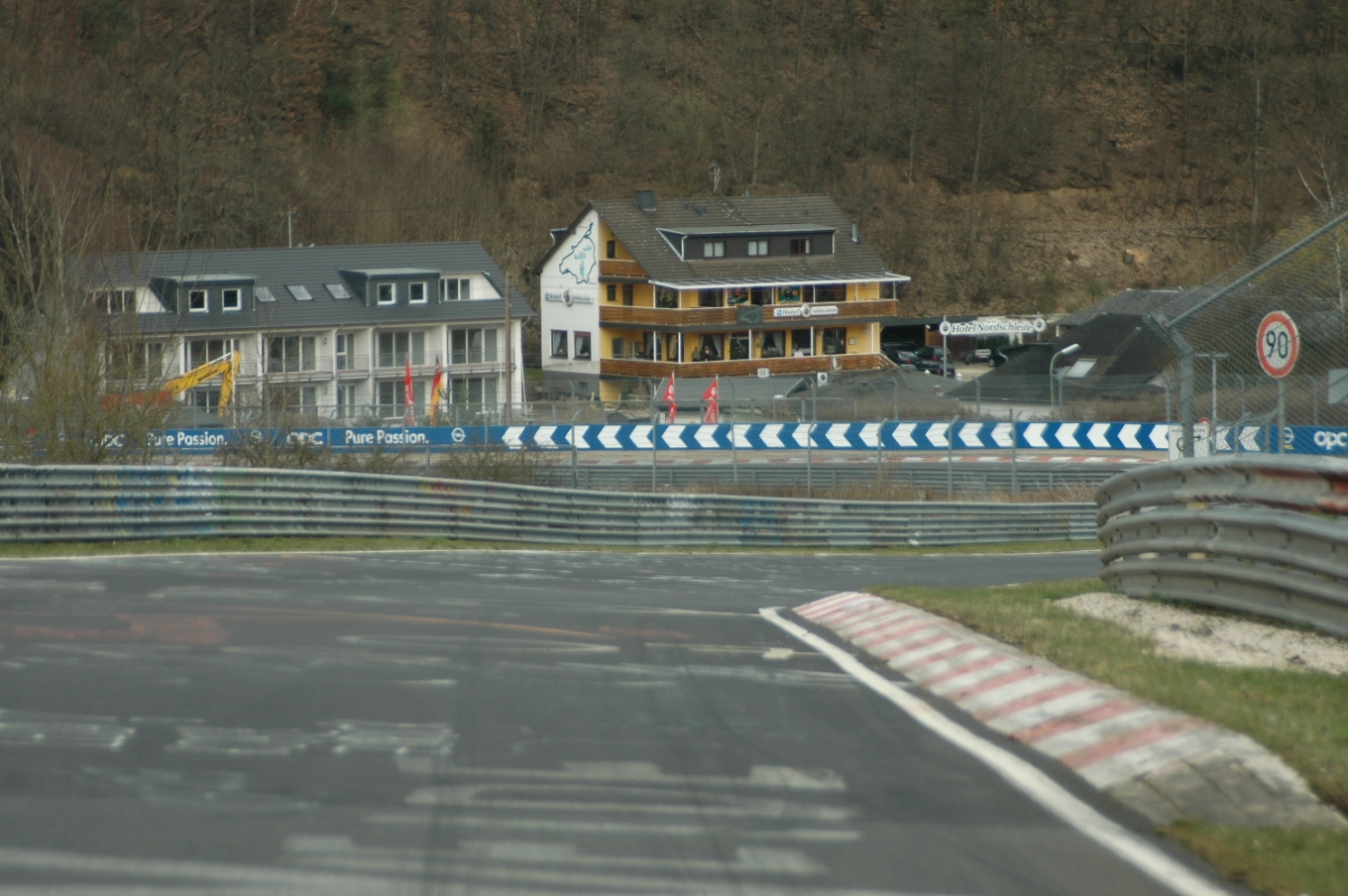 I maxxed-out on the track at about 130mph driving the E500. I was able to top 145mph on the Autobahn afterwards, but it’s not the same thing. The ‘ring is not about driving flat-out in a stright line, but rather about mastering the same twists and turns as made the greats like Fangio and Carracciola famous. Nürburg is an easy drive from Frankfurt-am-Main airport – probably the biggest central European hub. Make sure you have checked the Nürburgring website ahead of time for the schedule of open track time, as the course is often closed for manufacturer testing (look for “Tourist Rides”). Now for a little taste of the fun, check out this ride-along video narrated by Mr. Trent who did the same for me in person.

Now start saving and plan a trip of your own, because one of these days the safety hounds are going to get wind of this amazing opportunity and shut it down because they can. It’s totally worth it.