As a certifiable Car Geek I often joke (am I joking?) with family and friends that I am on a long quest to own one of every car I’ve ever been even remotely interested in – and in all fairness at nearly a half-century old I am well on my way. Still I think a lot of enthusiasts like me have certain cars we come back to repeatedly. For TTS blog-mate Jonathan I think it would be the BMW E30 and/or E3, and for me it’s the venerable Mercedes-Benz W123 – especially the 1982-1985 300D Turbo Diesel. Oh, yeah – I love me a turbo diesel W123.

Sure, they’re utilitarian, stodgy, slow (especially by 2020 standards), sparse, and stinky. They are also simple, safe (these cars define sacrificial crumple-zone), economical, durable, and – in their own way – fun to drive. Besides, I *like* the smell of diesel exhaust! The problem, especially if you frequent online sales venues like Bring a Trailer or Hemmings, is that sometime in the past handful of years some great automotive collective out there in the ether seems to have decreed that decent W123s are worth their not unsubstantial weight in francium. Double that for wagons. I suppose that means that people like me who will love, cherish, honor, and obey our W123s are out of luck. Or does it?

Looking at BringaTrailer’s W123 sales reports for the last quarter, prices in that forum have ranged from a low of $5,100 for a fair sedan with 236K miles and issues to $23,250 for a clean-if-not-especially-inspiring single-family-owned 300D with 60,000 miles. These are actual sales prices. Now, understand that there is this phenomenon out there of the “BaT premium” or “BaT tax” whereby cars that would sell in other venues for less money may achieve significantly higher sales prices on premium forums than sellers could otherwise expect. What these sales have done, however, is convinced sellers – most frequently dealers – that their ordinary cars are somehow suddenly worth a lot more. It’s now common in places like eBay or AutoTrader to find pretty sketchy (read: rusty, leaky, troubled) W123s with 5-figure asking prices – but keep in mind a seller can ASK anything they want, it doesn’t mean they’ll get it. Still, read the forums and it appears that there are a lot of buyers out there who have fallen into the trap.

So the other day, as I often do, I got a hankering for another W123. It comes and goes – and I need another car in my fleet like I need the proverbial hole in my head, especially since I really don’t want to sell anything – but there I was surfing the web. I found several middling cars asking between $9K and $13K, and most had at least some degree of needs. With a W123 you look close at rust in the rockers, valances, wheelarches, doors, dogleg, etc., as well as fluid leaks, blowby, functionality of the vacuum system (that controls everything from door locks to shut off), and also the general functionality and condition you’d look at on any used car. And no, the air conditioning system does NOT “just need a charge”. Double bonus if you get substantial service history, multiple keys, books, tool kit, and so on.

A little more digging turned-up a few interesting cars with realistic sellers. Two, in particular, stood out and provided the photographic backdrop for today’s diatribe: a Light Ivory (German taxicab yellow) on Palomino MB-Tex nearly identical to the one I sold about 18 years ago available HERE on FaceBook Marketplace in Senoia, Georgia for $5,000; and a far less common Metallic (Barolo or Cabernet?) Red on Palomino MB-Tex available HERE on CraigsList in Russian River, California for $4,500. They both have some miles on them (223K and 161K, respectively), but they’re old school iron-block Mercedes OM617a diesels. If you plan to drive your W123, these miles shouldn’t frighten you in the least. Frankly, at these prices you have some room to take solid base cars and make them very, very nice.

Looking at both of these cars, the MB-Tex in each is a little “pinked” from the sun, so I’d look into re-dye or even replacement with new factory upholstery. From there, I’d invest in good detailing including underhood and paint correction, shampoo the carpets and put factory floormats over them, send the wood to Madera Concepts, and take care of any small items – like the non-functional antenna on the Ivory car. I’d also cross my fingers and remove the chrome wheel arch trims on the red car – hoping there’s not rot lurking beneath! 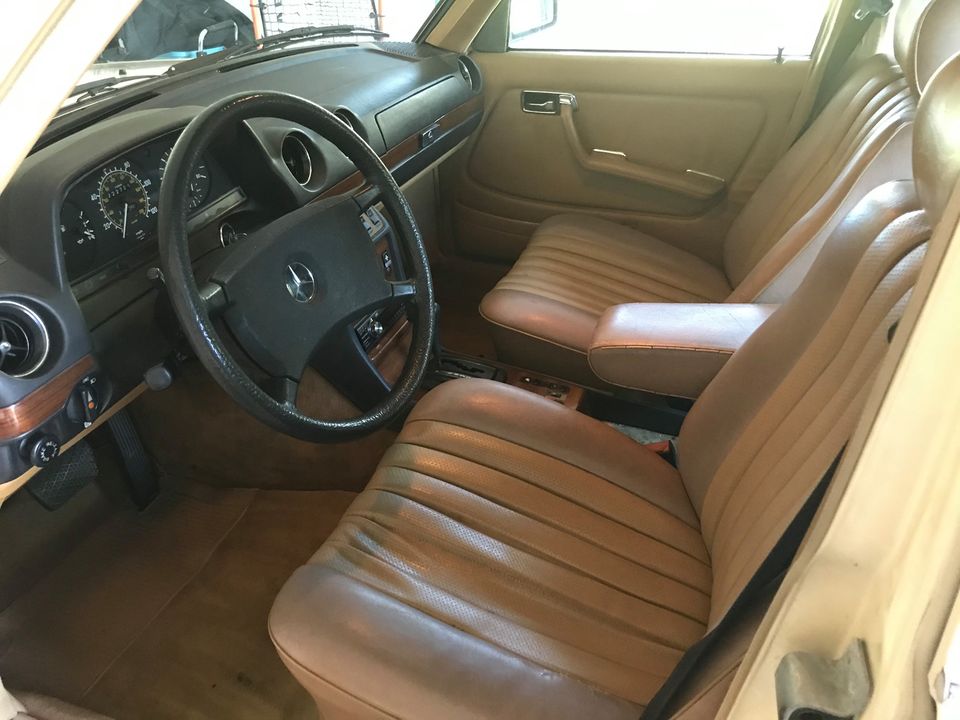 For a total investment of, say, $8,000, either of these would make a killer classic daily driver that you could literally enjoy forever, as a good W123 will doubtlessly outlive you. Compare that to this clean but by no mans perfect 226K mile car that sold for a hair under $10k. After you coddle either of our subject cars just a bit you could probably turn around and sell either one on BringaTrailer for $10K or more, not that I’m suggesting you should do that. If you do, however, just remember that presentation is everything. Just sayin’.