Karosserie Baur, based in Stuttgart, Germany, has been involved in open-top BMWs since the 1930s. Fast-forward four or so decades, to 1971, and Baur had replaced their 1600-2 and 2002 full-convertible (voll cabriolet) with a targa-style design, ostensibly for safety. Dubbed the 2002 Baur Cabriolet Targa, these models feature a removable center roof section that stows in the trunk, while the rear section folds down like a conventional, albeit short, convertible top. Think of an early soft-window Porsche 911…

… or, if you like your motoring with a healthy dollop of masochism, a Jaguar XJSC…

… and you’ll be close. Or, just look at this image from Baur themselves:

Since Porsche already owned the “Targa” name, Baur opted to call their subsequent cars the Topcabriolet (TC), starting with the TC1 and TC2 (E21 and E30 3 Series coupes, respectively) and later the TC4, based on the E36 3 Series four-door sedan.

Disclaimer: We should chat for a moment before we start to talk about fixing things with tools. This repair I’m going to describe in a moment seems to work on Baur E30 bodies built after chassis #42266, but it may work for other models. No warranties are implied or expressed with this repair. This happened to work for me, at least as of this writing. Running with scissors while playing with matches is dangerous, so get a helmet and proceed with caution, if at all. Also note you can click on any of these images to get a larger view, which may be helpful in you not repairing your car.

When I first met our Baur – a 1985 BMW 323i, pictured at top – six or so years ago, I was pleasantly surprised to find the TC2-specific roof pieces were almost completely accounted for and in remarkably good condition. Yes, a couple of rubber grommets were missing, and the top cover had some snaps that had pulled through. The rubber seals have also flattened a bit with time. But it was basically all there, including a nice center panel – with the original red receivers on the roof header for the panel’s locating tabs (the replacement receivers are black) – and a virtually new folding section with a beautifully clear back window.

The locking mechanism consists of a knob on the bottom and a metal locking plate on the top, the latter of which accepts two locating pins attached to underside of the center panel. Inside the locking mechanism lives a nested telescopic screw, the travel of which allows twice as much vertical movement as its own height. It’s very clever, but it appeared at least one of the nested screw sections was stripped.

Side note: I had no idea what this screw-within-a-screw thing was called, so I pinged by buddy Scott who (mind currently blowing) I’ve known for pushing 25 years. Scott does and knows interesting things. He plays with old BMWs and Porsches, and occasionally puts roving cameras on Mars. But life is all about balance, so I feel obligated to mention that during the Y2K scare Scott drove around for a few weeks with a spare gas tank filled with fuel in the trunk of his 1974 BMW Bavaria.

Still, Scott came through, as I knew he would, with Nested Telescopic Screws and the Nested Screw Fastener. He further offered, “Lemme know what you need, and I’ll call in the people smarter than me, like the Mechanical Engineers at my Space Hardware Company.”

Baur TC2-specific replacement parts – those that are not just generic 35-year-old BMW E30 bits for a model never sold in the United States – do exist, and some of them are even available through BMW Classic. That doesn’t mean everything is available, or that collecting parts made largely of unobtanium is necessarily easy. After some amount of time off the market, BMW seemed to again be offering the “repair kit” for the locking mechanism, consisting of the nested screws, the base blocks and gasket, and the cover plate.

This is actually my mod-op for Baur parts: If something is available, I will order more than one of that thing, if possible. I figure since our TC2 has found its forever home, I’ll eventually need those extra bits. And since the repair kit had been out of circulation for some time, I also figured it couldn’t hurt to order an extra, plus another one.

Except when I pulled the locking mechanism apart, it quickly became apparent stripped screws were not my problem. The knob itself – that which you turn to raise or lower the trailing edge of the center panel – had been broken off at some point. Originally, it had clicked into an indexed star-shaped section of the inner nested screw. Indeed, the nub of the original handle was still jammed in there.

To “repair” it, someone had drilled a hole in the replacement knob and run a long screw with a cup washer through it and the inner nested screw to a tiny nyloc nut and a star washer. Even though the screw and nyloc were as tight as they could be, the knob was slipping on the nub and the inner screw (and nobody likes that).

I say “replacement” knob because the one currently in the car has “Webasto” molded into it. Given that Baur designed and created these convertible tops, I can’t imagine them buying pieces and parts from Webasto, a massive sunroof company at the time who were arguably a competitor.

The basic idea behind the repair is to either somehow connect the handle to the inner nested screw, or at least be able to tighten things up such that when turning the knob it cannot slip against that screw.

To perhaps state the obvious; That knob is no longer available (N.L.A.) from BMW or, apparently, anywhere else. Even when you could have one, the knob doesn’t seem to have been available as a separate piece, but rather as one assembly with the blocks that go around the nested screws and the cover plate. The part is simply called “HANDLE” and they are nowhere to be found. If I ever do find a new or even a good one, I will have the knob patterned and sell it at cost. Pinky swear.

The first repair attempt required a long self-tapping screw run though the existing hole in the knob to a thin tap strip. Though the memory is faded, I’m pretty sure the strip was from a BMW Bavaria glove box. The first step was to cut the strip down to fit inside the outer nested screw. There was almost enough notch molded into the top of inner nested screw for the tap strip to grab on to. I wound up using a file to make the notch deeper, giving the tap strip a little more purchase. I then trimmed the self-tapping screw so the metal locking plate could properly seat on top. 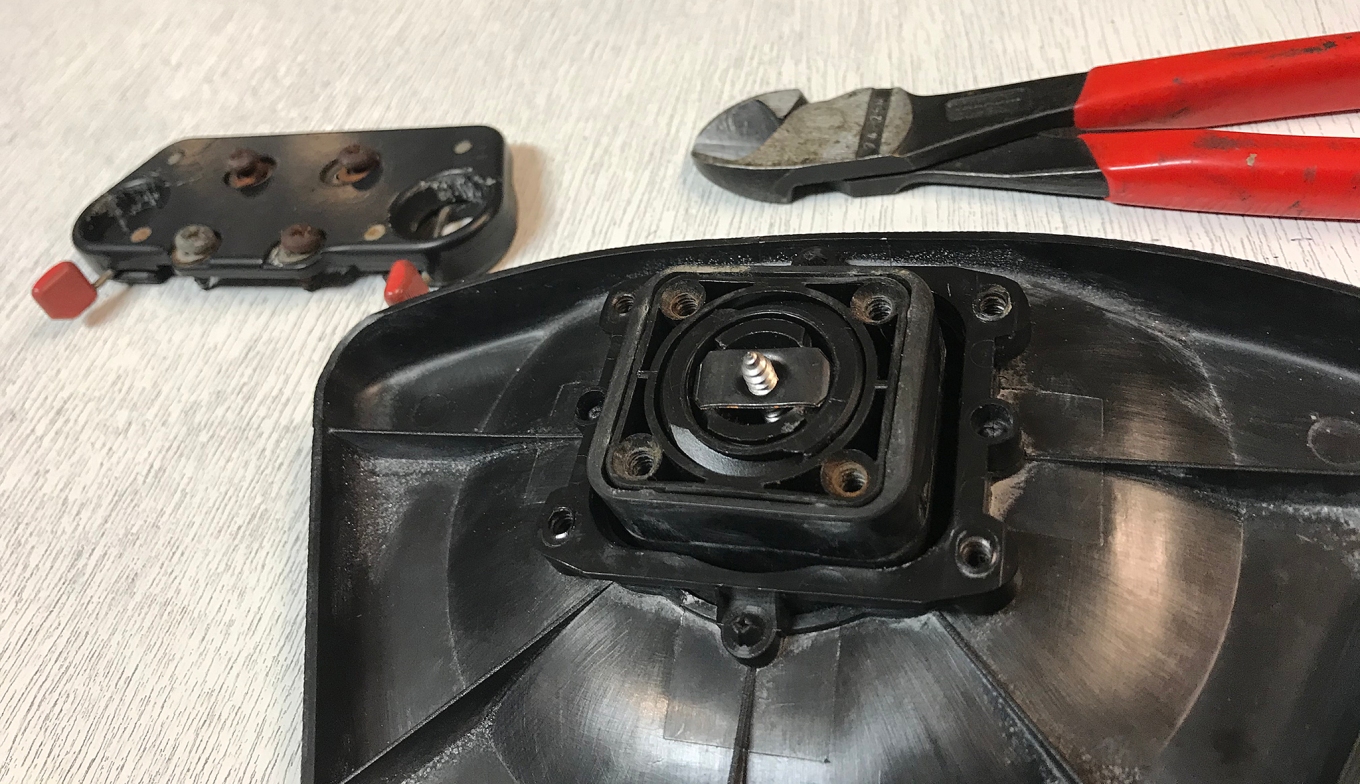 After I reinstalled everything, it only sort of worked. The knob was definitely tighter against the inner nested screw. However, the self-tapping screw would still loosen unless you were very careful, letting the knob again slip.

I went back to thinking about nyloc nuts. Rummaging around my hardware bins produced a clip with a square-head nyloc. I then found a long machine screw that used to hold the steering column covers together in a Bavaria (this is why you never throw away hardware). The square nyloc actually fit inside the inner nested screw and could be drawn down into the plastic, its square shoulders digging in and preventing it from turning. This effectively bound everything together, and the nyloc prevents it from loosening during use.

It’s been a little while, now, and this repair appears to be holding. Even though I didn’t technically need them, I wound up replacing the inner and outer nested telescopic screws as well as the surrounding blocks, laying down some silicone grease during reassembly.

What I now see is even though the locking mechanism draws the center panel tightly to the roof bar, the panel doesn’t lay completely evenly on the car. Further, the rear folding section doesn’t line up with the center panel. There is some combination of collapsed rubber seals – that mostly still keep the water out – and adjustment of the rear section’s latches that will need to be looked at.

Sometimes, however, better is better. And this repair has definitely rendered the top functionality better than it was before this adventure. Now I suppose I need to see about some new rubber seals. Old cars, man. Old cars.

Totally That Stupid – Car Geekdom, and a little bit of life. 1985 BMW 323i Baur TC2: Convertible Top Musings And Repair
Loading Comments...
%d bloggers like this: