Anyone who has spent some time around Totally That Stupid or its authors knows we love old and older Audis. During our formative years in the 1980s and 90s, they were the critical third leg of our German Car Trifecta, which perhaps obviously included BMW and Mercedes-Benz. By the mid-90s, Audi – having survived the Unintended Acceleration baptism by fire – was ascendent. 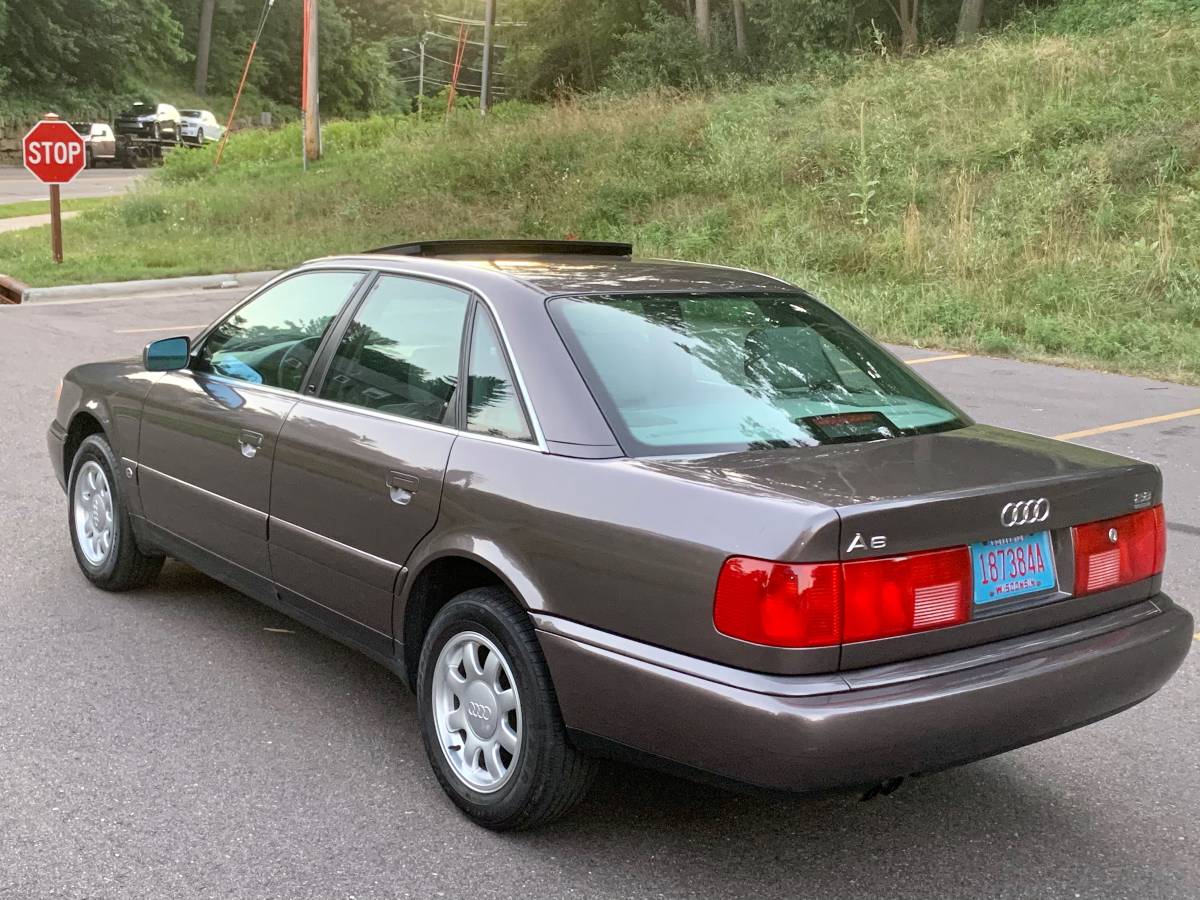 Audis were different by design and execution. Mercedes chased luxury and prestige, while BMW chased driving performance and character. The four-ringed wonders landed somewhere in the middle. Audis were fun to drive, but their mainline cars were not deemed as entertaining or quick as the equivalent BMW. Audi exteriors were handsome and their interiors ultimately became gorgeous, putting them on par with – or even a little ahead of – Mercedes and BMW. Reliability, build quality, and longevity were hit or miss compared to Mercedes, and lagged even behind BMW’s first forays into computer-designed plastic mobility.

Which makes this 1995 Audi A6, out of some place called Lake Delton, Wisconsin, all the more remarkable. It’s amazing to think 25 years have passed under its wheels. A 5-digit-mileage example from this part of the world – mine, actually – a place that dissolves cars on contact. Vehicles old and young are like snails wallowing in salt around here.

The photos tell the story. The Cashmere Gray Pearl paint appears to shine everywhere, not overly surprising on an Audi that’s been kept out of the sun. But what’s really remarkable is the trim around the car. See how the door strips and the black rubber bits around the lower edges aren’t missing or bent? See how all the grilles in the lower front bumper are present, and how the bumpers at both ends are almost completely free from scrapes and bite marks? The stock wheels have no curb rash, and the trunk badges are in their correct positions. Somebody cared a lot about keeping this A6 not just pretty but also tidy.

We’re not usually overly enthusiastic about gray – Audi offered some truly beautiful colors then as now – but this car wears its middle-black color beautifully. Rust doesn’t appear to be an issue, which it certainly can be on these.

The interior is even nicer. Audi introduced this cabin design to North America in 1988 with the B3 80/90, and then updated their larger C3 platform to include it for 1989. Nobody was doing cabins like Audi during this time. When the C3 gave way to the C4 in 1992, the design evolved in size but not substance. Why? Just look at it. 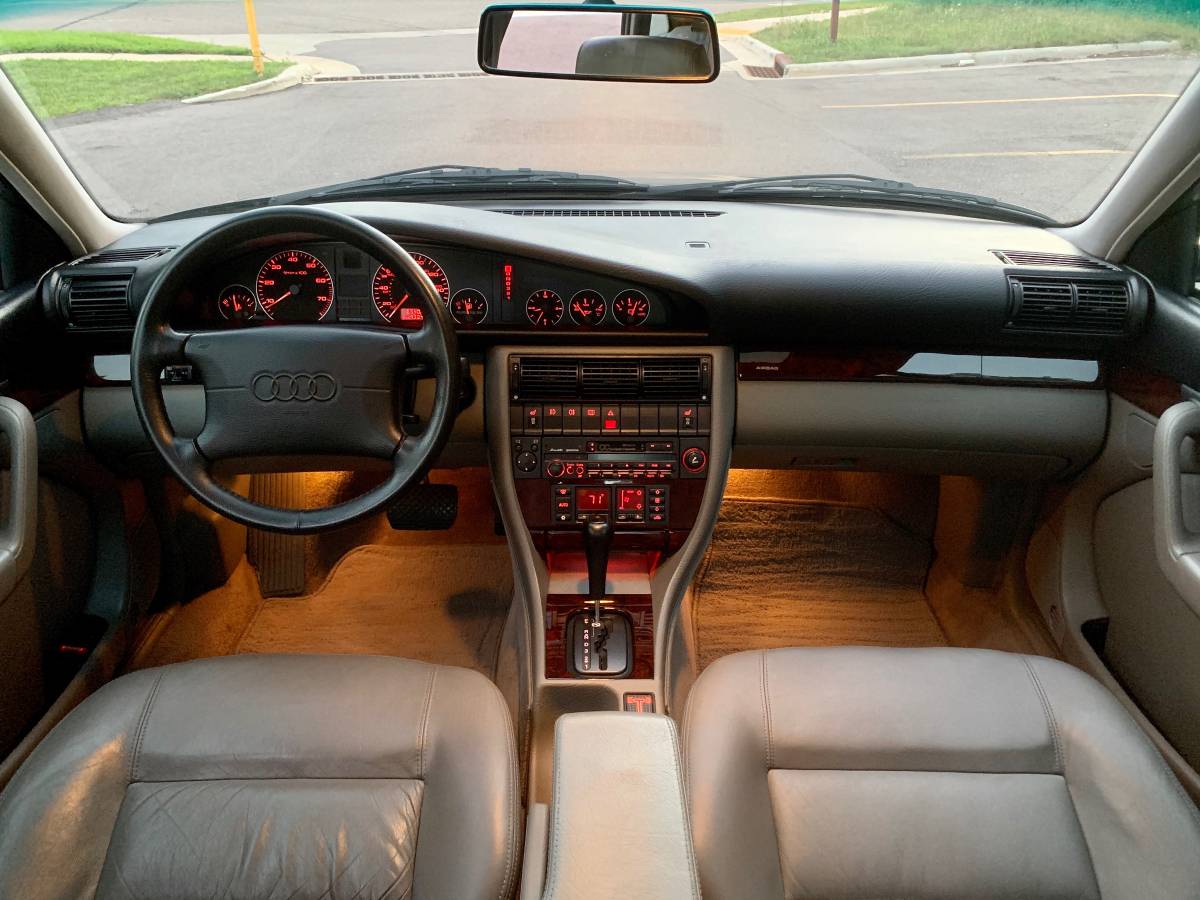 The gentle curves of the dashboard meet each door panel almost seamlessly. I love how BMW dashboards of the time angle toward the driver, but their overall design and detail still come in second to Audi. The center stack has many buttons, but no clutter. The wood is real, and everywhere. Nothing looks like an afterthought. Sure, Audi slightly cribbed the gated automatic shifter design from Mercedes, but everything else looks exactly nothing like its competitors. When it debuted, the design was German, sure, somehow, but next-level German, and what others would strive for in their subsequent vehicles. 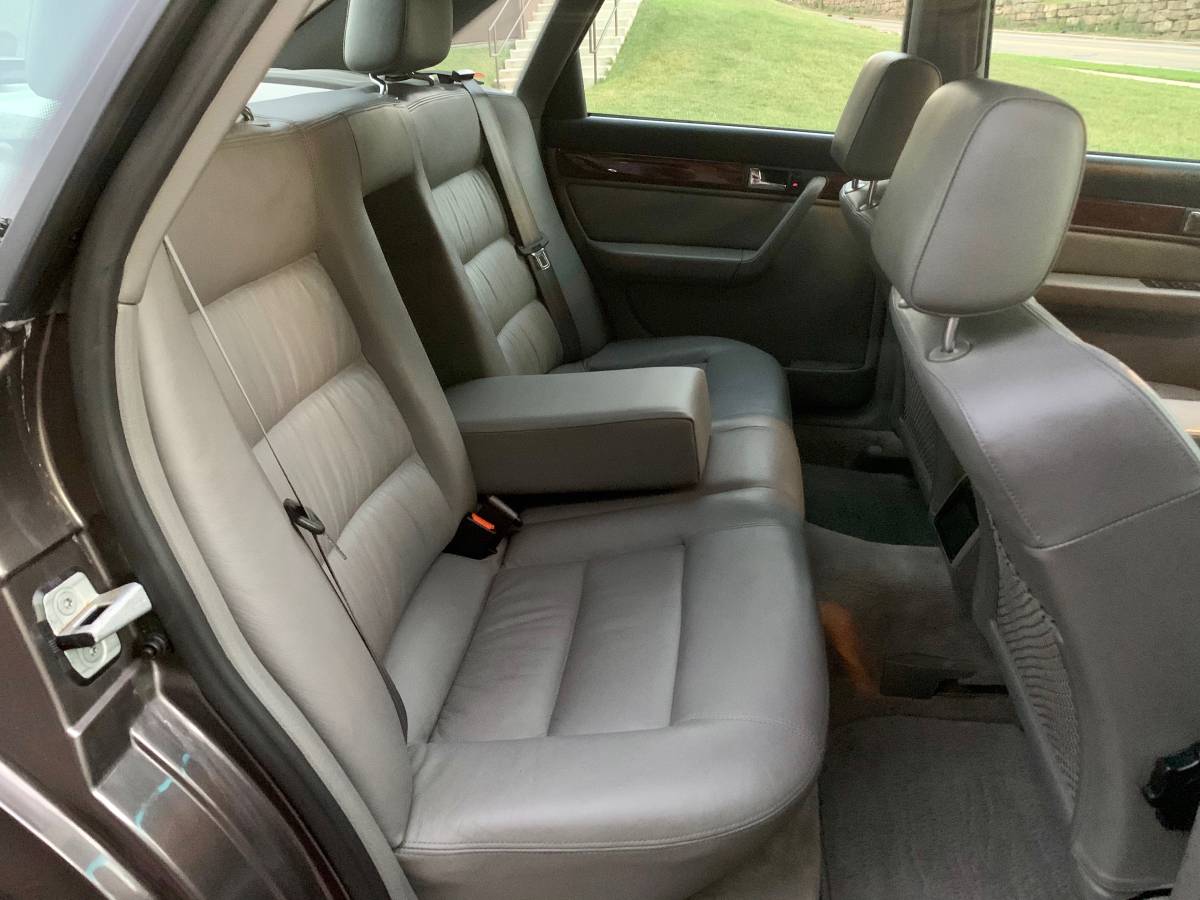 Comparing non-sport seats, the Audi’s are as comfortable as a Mercedes, and hold you in as well as a BMW. The A6 interior was spacious for a midsize sedan of the time, which today makes it smaller inside than a new Honda Civic. Typical of most sedans of the day, you can easily see out in all directions.

And the instruments. Mother of whomever or whatever you bow to, that is how you do a cluster. Clear analog gauges – and so, so many of them – roll out across two-thirds of the dashboard, all subtly ringed in chrome and all bathed in a warm red glow. Pardon, if you will. I need a moment. 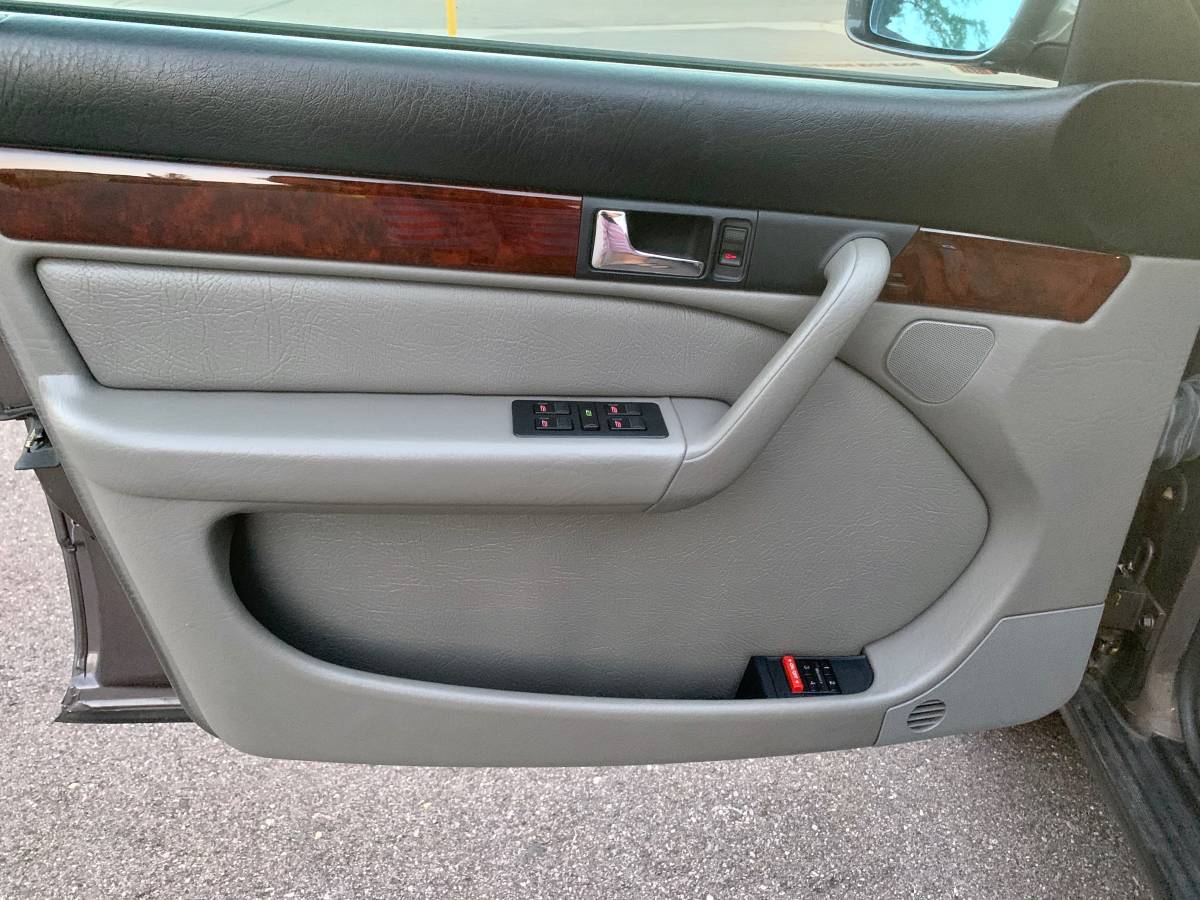 Again, it’s the condition here that’s astonishing. The seating is gorgeous, without tears or wear. There’s a little bit of butt shine applied to the bottom of the driver’s chair, but no bolster scuffing. Plastics everywhere are intact and all one color. The wood has a deep luster and no obvious cracks. Hell, the netting on the back of the front seats isn’t even saggy. How come BMW and Mercedes couldn’t figure that out?

Under the hood lives a 12-valve, 2.8-liter V6 that spun out 172 horsepower on its best day. That day, mileage-wise, wasn’t that long ago, so performance should be on par. The A6 wasn’t fast, but even today it will keep up with traffic just fine, though its real forte is hoovering up lots and lots of highway or fast farm road miles. Hopefully, “maintained and serviced at the highest level” means the timing belt service is up to date.

1995 was the last year of OBD-1, so the emissions equipment will be a bit simpler. 1995 was also the last year of the manual transmission in the non-S C4; This example shifts for you, however. We like to grouse about the lack of third pedal, but given how nice this A6 shows I’m not actually angry about that. Being a Quattro, you at least have control over the locking rear differential.

Frankly, given this car’s aesthetic, condition, and mileage, $5,900 feels like an absolute bargain. I’d even wager the 66,000 miles shown digitally is accurate  (Audi mechanical odometers failed early and often). I think it would be tough to find another low-mileage example this clean.

To drive it or to preserve it, that is a question for another time. 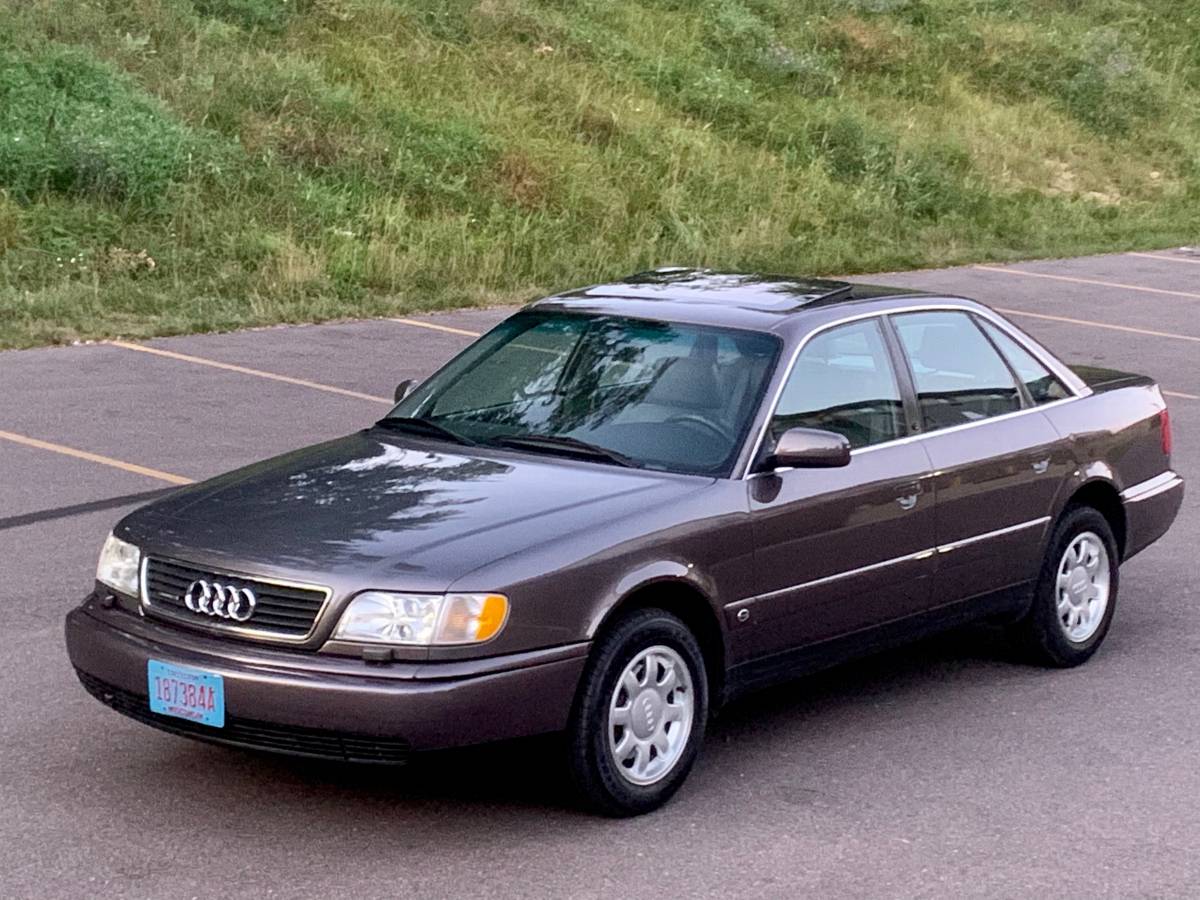 One thought on “1995 Audi A6: A Classic From Ingolstadt” Leave a comment ›