I will always have a soft spot for the 1982-1991 Audi C3 sedan, better known as the 100, 200 and 5000. They were attractive and comfortable, a solid but valid step away from the typical BMWs of the day. They were quirky and unreliable. Like Saabs, but German.

We had one. My friend Becky’s parents had one. Ferris-goddamned-Bueller had one! How much more cred do you need? None. Move along. 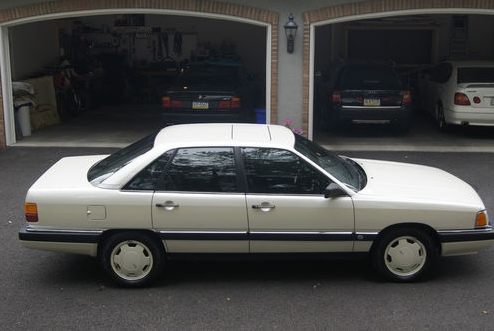 This 1986 5000CS Turbo Quattro on eBay, with only 83k on the clock, is a stunning survivor with a paper trail. They are rarely this nice. The pearlescent paint glows, even on the wheels. The side moldings, which are usually dangling by their weak plastic clips, seem secure. The trunk badges are in the correct locations. The bumpers are usually mangled, with chunks missing, corners munched, and sheets of paint lifting off. Not these, minus a few paint chips. Shame the front was drilled for a license plate.

Inside is equally nice. The driver’s seat has some side bolster wear, but then they all do. The headliner was recently refurbished, and the dashboard wears the original stereo. It’s a classic Audi interior, and you can see the influence it had on the later cabins, often called some of the best in the business.

In the US these were initially powered by rather anemic  10-valve 5-cylinder engines producing 100-110 horsepower (nominally-aspirated) or 140-162 horsepower (turbocharged). Later versions got more oomph, culminating in the 227 horsepower 1991 200 20v Quattro. While front wheel drive Turbos were all automatics (until 1988), all Quattros of the day had row-your-own 5-speed gearboxes.

This C3 should have made 162 horsepower out of the box. However, the seller states it has been uprated with software and – what I’m guessing is – a harder wastegate spring, pushing power to about 225. It’s probably fairly peppy since these really didn’t weigh that much, at least compared to today’s tubby barges. The shifter will be vague, and the clutch will be light. It will track like a freight train at triple-digit speeds, even in crappy weather. 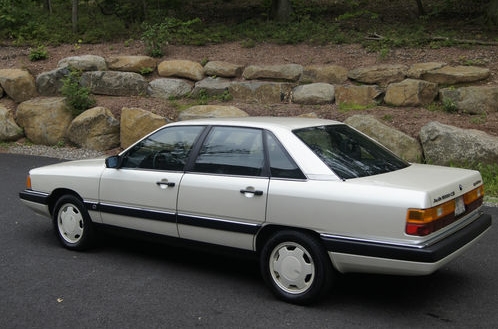 These cars, almost 30 years later, still manage to look modern. They epitomize the three-box design, but are subtly aerodynamic without the melted jellybean look that became so popular. I look at the pictures, especially the rear three-quarter view, and marvel at how well the overall design has aged. More bank manager cars should look like this, rather than BMWs from 2002-2012.

Were they good cars? No, not even close. Ours jettisoned pretty much every subsystem a car can self-defecate – air conditioning, power steering, brakes, automatic transmission (twice), wheel bearings, trip computer, power seat memory, sunroof… the list goes on. The power seat switches and the climate control head unit never failed. Why? They were supplied by General Motors.

These days, with a strong cult following and the support of the web, you could make one reliable. Most of the really horrible cars have fallen off the road, relegated to junkyards in California or fields and barns in Montana. The remainder are usually not this nice, but are still decent cars. Regardless of all its problems, ours never failed to start.

The eBay auction is ending in less than a day. Hopefully, a deal can be struck since it looks like the reserve won’t be met. This would be an easy car to look after, but the temptation to rack up the miles would be hard to resist.

Totally That Stupid – Car Geekdom, and a little bit of life. 1986 Audi 5000CS Turbo Quattro: A Shame To Drive It?
Loading Comments...