is a terrific example of precisely how not to sell your car. The Audi Coupe GT was the poor man’s Ur-Quattro and was the foundation upon which the Coupe Quattro was based. It is the Porsche 924 to Audi’s 944 – separated by driveline differences and more importantly big, bulging fender flares. Still, the Coupe GT is a worthy car in its own right and while not a sports car in the traditional roadster, rear wheel drive sense offered a very 1980s GT driving experience in the same market niche as the Honda Prelude, Toyota Celica, and arguably the Alfa-Romeo GTV but with a distinctly Germanic flair. In any case, there is no excuse for someone – clearly an enthusiast – who owns this car not to take the time to present it properly to his potential customers.

First and foremost, fairly recently Craigslist made it easy to include larger, higher-resolution photos with free ads. There is no reason to post tiny, crappy, cell-phone quality photos of any car you are trying to sell, especially one that will appeal to a classic or enthusiast audience. Can you guess the first question this buyer will receive from a prospective buyer? Yup: “Can you send more detailed photos?” In addition, even if you’re limited to just four photos for the purposes of an online ad, the seller should give at least a little consideration to what buyers would want to see. In this case, I don’t know that I’d give priority to a blurred photo of the front seats or a closeup of one of the four wheels to possibly an engine photo and a rear quarter shot that includes both the tail of the car as well as the side not captured in the other exterior photo. 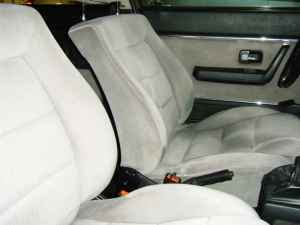 “But,” you say, “those seats and wheels are really nice, and buyers need to know about them!” Indeed they do. That’s why the Master Control invented the keyboard upon which you can type a thorough description, and photo sharing websites like Picasa where you can, for free, post as many pictures as your little heart desires. Seriously, tell me more about the car than a short paragraph and then cuts and pastes from 30 year-old Car and Driver magazines. Chances are that if I bothered to click on your ancient Audi, I’m not the average punter looking for a Camry. Instead, tell me about this car, how long you’ve had it, what you’ve done to it, its good points and bad points, what it needs, and how I can find out more about it. I suppose the link to the article is not a bad thing, but the excerpts are definitely overkill. I am pleased to see that the AC works. That answers one of my usual list of about 20 questions.

All that said, ads like this often represent opportunities for enthusiasts with a keen eye. All to often an ad like this that fails the scannability test will not draw the attention it should no matter how good the car. The resulting lack of response makes it easy to swoop in and grab it for a good price. As it stands, if this car is as nice as it looks like it might be, the $2,800 is not bad. However, it’s been on CL several times now so I have to assume that response has been somewhat less than hoped, so the seller may be willing to deal.

As for the car, any clean Coupe GT will give you the durable Audi 5-cylinder with 0-60 times in the 8s, top speed around 120mph, and a well-balanced, competent chassis. They can be fun cars on the back roads, more so if the suspension has been tweaked a little. They can plow a little in stock form if you push them to the limit, but what vintage FWD car won’t? This car’s upgraded wheels are nice, and the stock rims convey. Better still are the upgraded European headlights that not only give the car a better look but also throw much better light for those late night romps. The black bumpers add nicely to the overall Euro ambiance. For less then three grand, this would make a good weekend car to take the kids out in, maybe even to start teaching your 10 year-old the finer points of the manual transmission. Heck, you could even use it for commuting duty once in a while or when your daily driver is in the shop! Keep it in this condition and you shouldn’t lose money, and could even make a little with the right care, maintenance, and buyer.