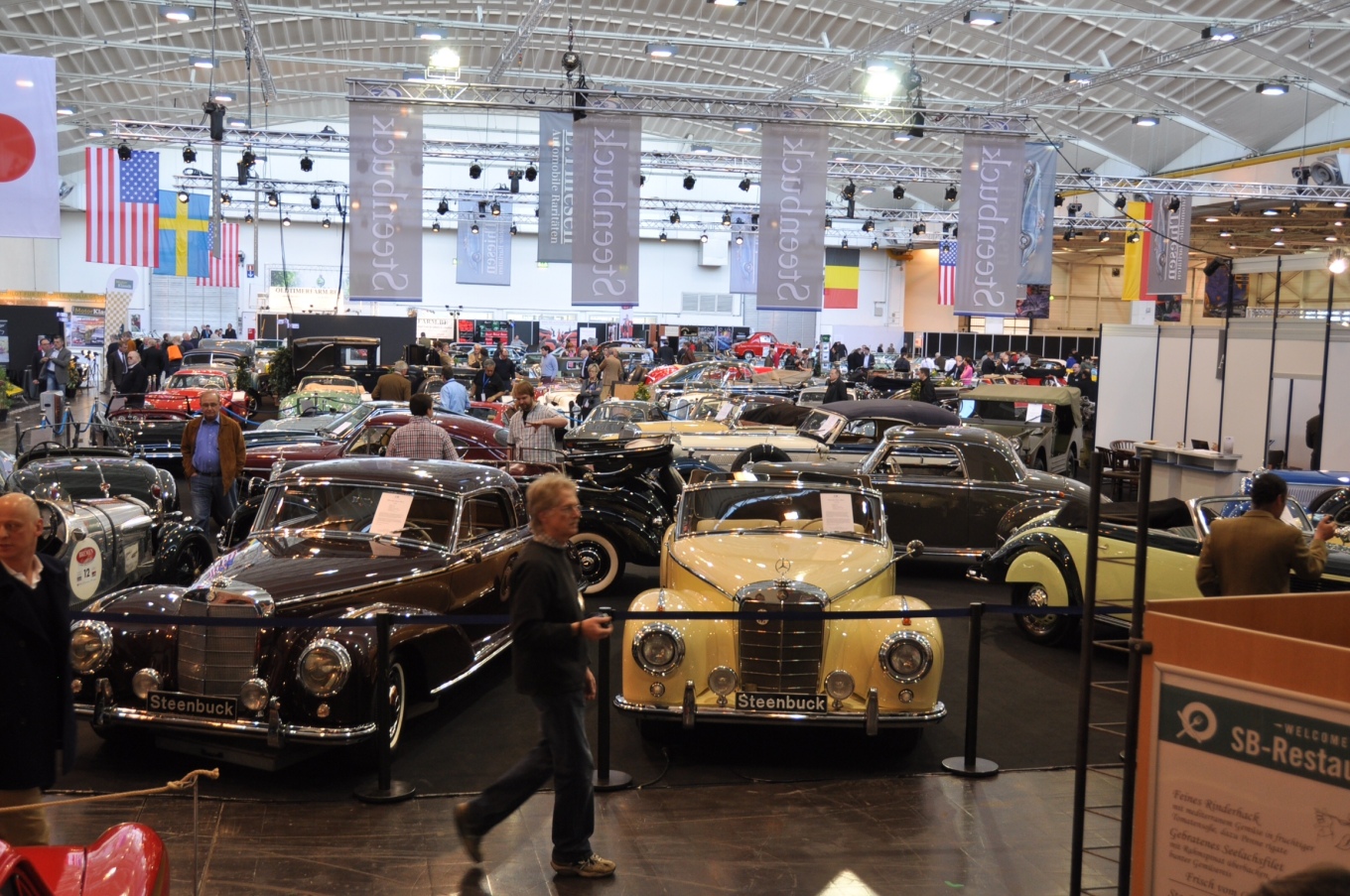 This is the obligatory 2013 Techno Classica Essen picture of Hall 10 at the Messe Essen convention center which has housed this event since its inception. But this hall barely scratches the surface. In fact, Techno Classica is comprised of displays in 17 interior halls, 3 outdoor open-air “markets”, and a covered vendor gallery. There is also food. And beer. Both German, and both really very tasty! Try as you might, there is really no way to take in the whole show in just a day (That’s a hint by the way. When you plan to come to next year’s event, plan on at least two days).

Above all, TCE is about cars. There are hundreds of them here, mostly in pretty fine fettle, but others in various states of repair ranging from barn-find condition to media-blasted shell to halfway through the restoration process. Some of the on display come from factory classic collections belonging to the likes of companies like Volkswagen, Porsche, BMW, and Mercedes-Benz, while others are the pride and joy of their owners, loaned to the manufacturers or their marque or model-specific clubs for display on their stands. The rest are there belonging to owners or dealers looking to sell them on to their next caretaker. Bottom line: As an enthusiast of classic European cars of all sorts, you can find one of just about everything at TCE. 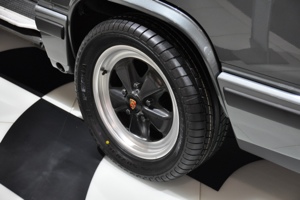 I learn something new each time I go to TCE. Well, usually several new things. For example, I had no idea that Volkswagen actually built a small handful of these 1985 Vanagons – tagged as the Porsche B32, and powered by a 3.2 liter flat-6 out of the 911. The factory sold all of them, and had to ask an owner to borrow it for the show. How do you value that? Better yet, where can I get one? Minivans be damned – this one is a freaking Porsche. 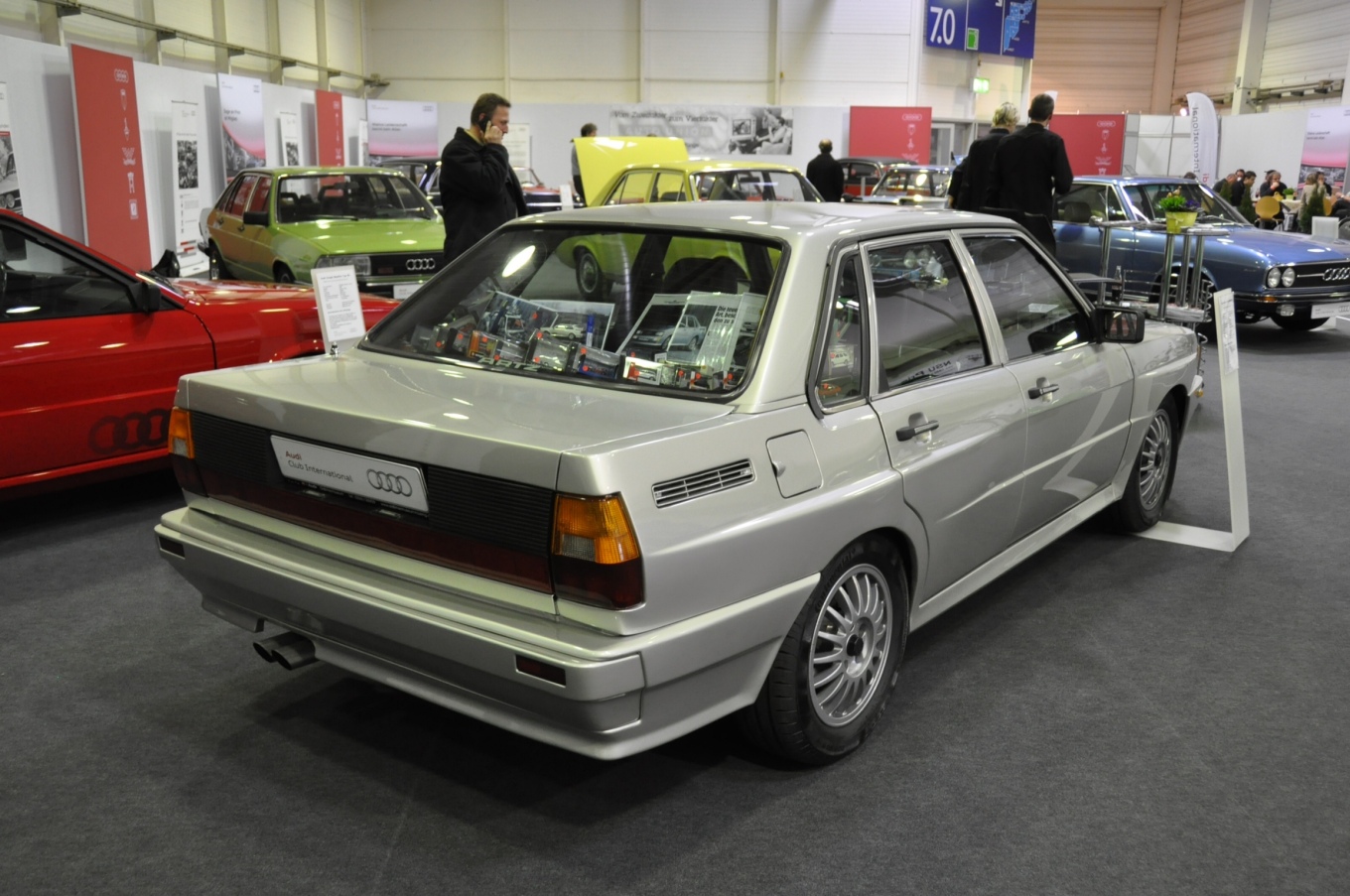 In some cases, the cars are certainly unique but have a face that only a mother could love. Such was the case in this scribe’s opinion about this Audi Quattro Sedan. What started life as a perfectly nice early slab-sided Audi 80 (4000) Quattro was modified with Ur-Quattro fender flares, alloys, and, well, the entire tail. Judging by the various articles, awards, and other bling scattered throughout the inside of the car, the owner is immensely proud of it. And that’s good for him.

One car that has long interested me but I’ve never really had the chance to examine up close is the NSU Ro80. These rotary-powered sedans were introduced in the late 1960s, offering, in addition to the rotary engine, front wheel drive and wonderfully forward-thinking aerodynamically conscious exterior styling. I’ve read where first generation RX-7 rotaries (including the higher-powered version from the GSL-SE) are relatively easy bolt-ins for these cars. I’d have one in a minute, and probably be the only one in my state. The funny thing is, you can find decent, running examples on mobile.de for as low as $3,000. Totally that stupid. 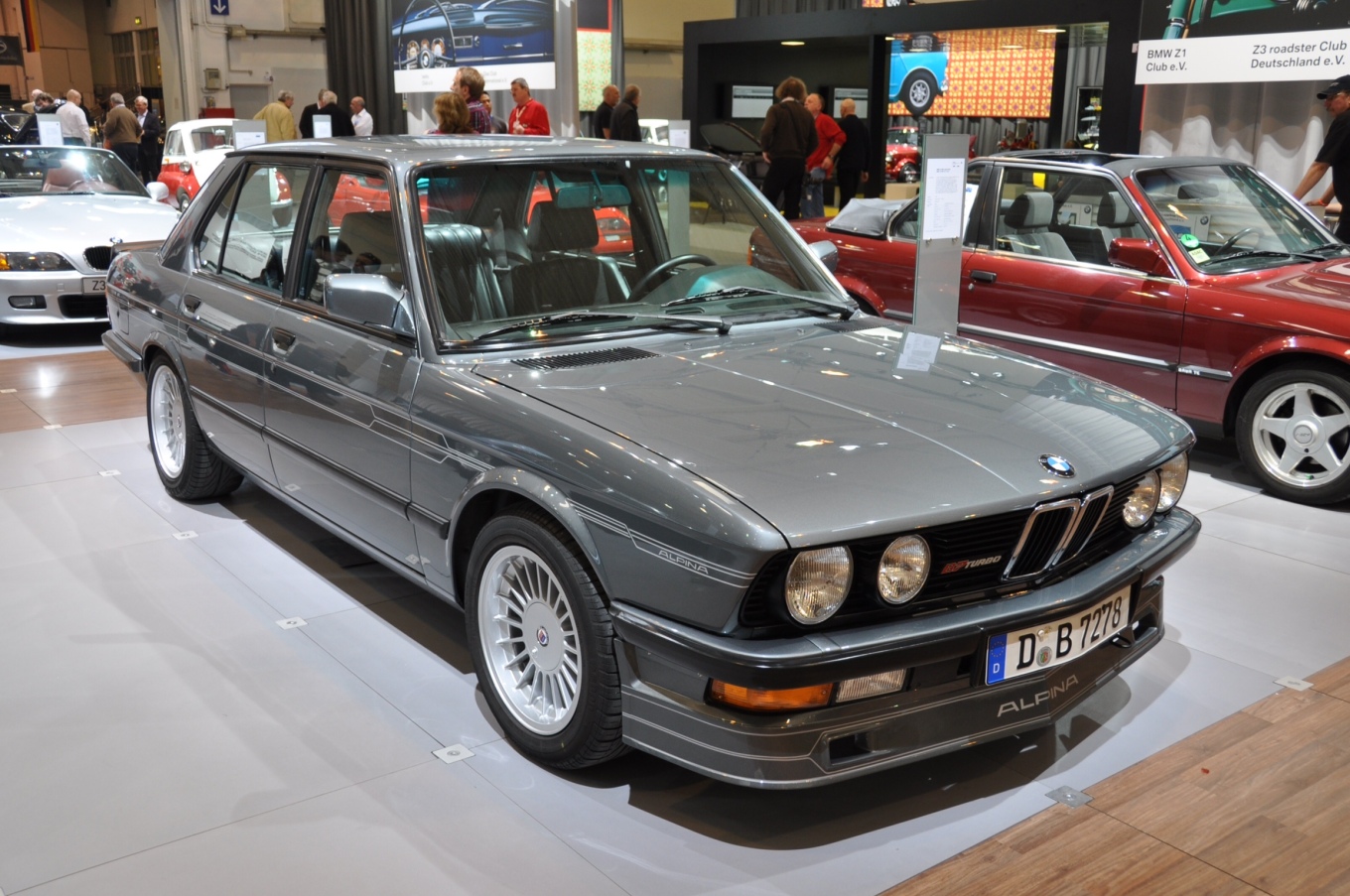 Thinking back to a couple of recent posts on cars we can’t get in the US, this pretty E28 Alpina B7 was a true eye-catcher. This one wasn’t for sale, it belonged to a member of the German E28 club who stood fairly close by keeping watch. However, had it actually been for sale, I could have bought it. Allow me to clarify: if I had the money, I could have bought it – it now qualifies for the 25-year importation exemption. Has this got the wheels in your head turning?

Having lived overseas when I was a kid, a few of the cars my parents drove were not cars available in the States. I think it is because of this that as I got older I developed a very warped sense of nostalgia for things automotive. TCE is a wonder for me when it comes to looking up close and personal at some of these cars – in this case a 1975 Opel Ascona and a 1976 VW Passat. Our Opel was white but otherwise the same, and although our Passat was a 4-door hatch, it was exactly the same color. Ahh, the memories of our youth. I’m sure my wife is more than a little pleased that neither of these followed me home (really, because neither was for sale – they were both part of club displays). 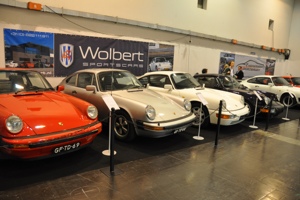 Having spent more than a little time in a new Porsche 997 GTS C4 run-out car, I found myself strangely fixated on several examples of Ferry’s follies, and there were a lot to be seen. I didn’t really pick a favorite, and to do so would have been sort of moot – the ones that I like best are the ones everyone else likes best, and hence they cost nearly as much as houses in most parts of the country. Seeing all those nice 911s, however, really has me thinking that the time to buy the 911 I have lusted after since my first ride in one (ca. 1982 – it was red and belonged to my pediatrician). I don’t know the exact car, but I can describe it: 1979-1987 911, coupe or targa, in one of those great 1980s metallic hues. Yummy. 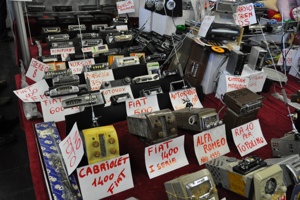 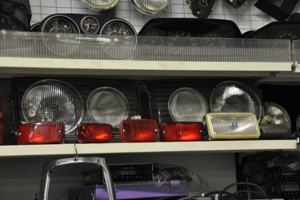 As I have said before when writing here about TCE, it’s not just the cars. There are seemingly hundreds of parts vendors hawking parts for all sorts of cars, mine included. I actually negotiated the seller of these rare twin round European headlights for Mercedes W123s (like my 300D Turbodiesel) to a fantastically reasonable 80 Euros for the pair, only to think better about it when I had to figure out how to get them home. I’ve got no more luggage capacity, and shipping would be cripplingly expensive. Ah, well. I did manage to get some interesting European brochures for cars I either have or like at sub-eBay prices. There are also guys selling art, model cars, clothing, and….. 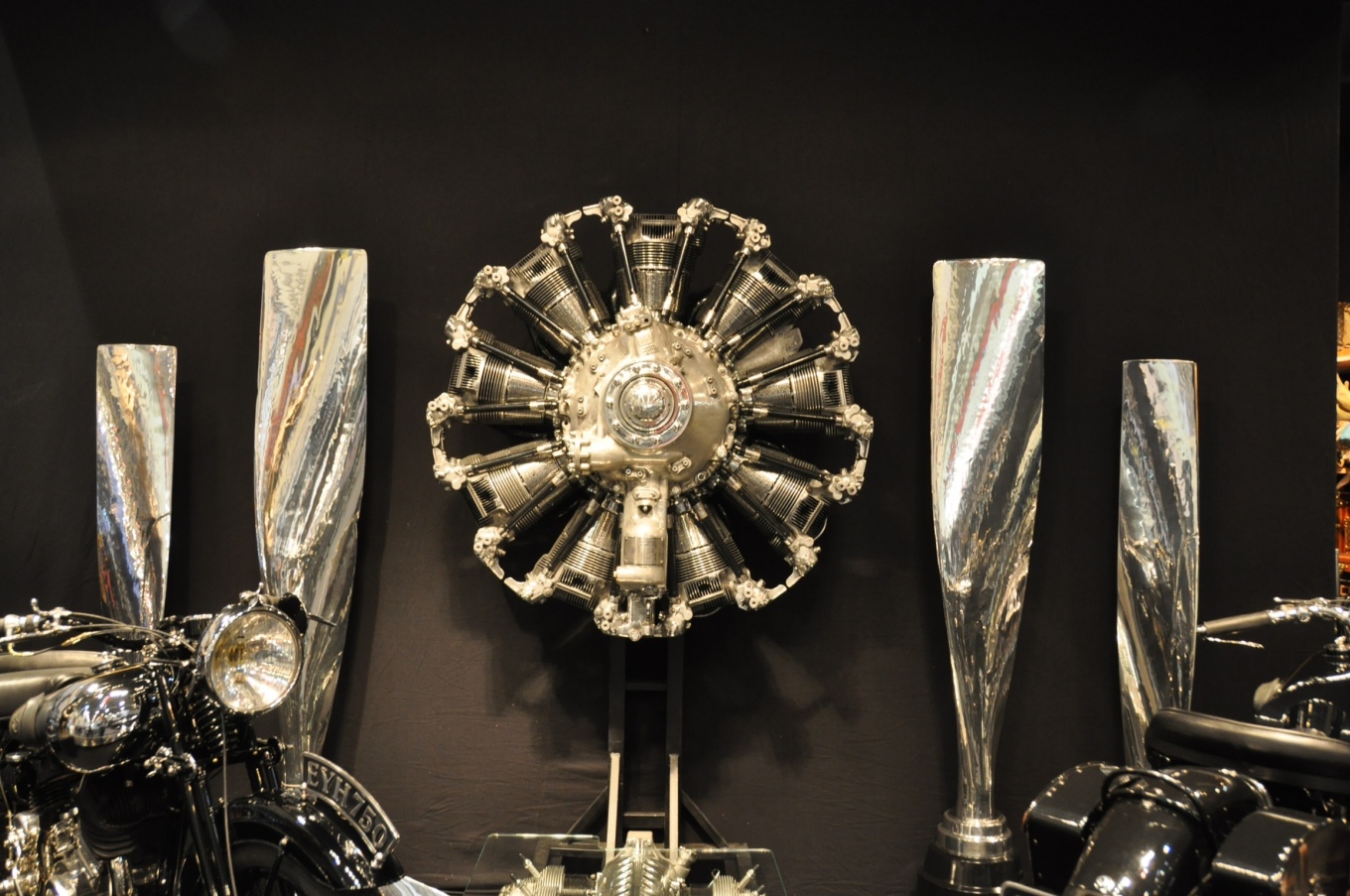 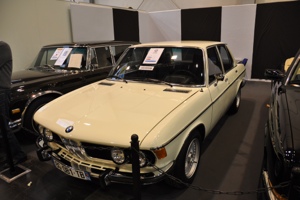 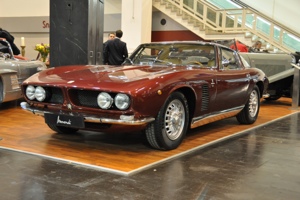 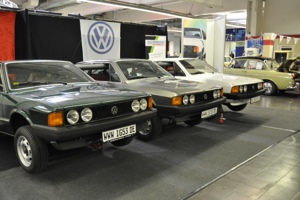 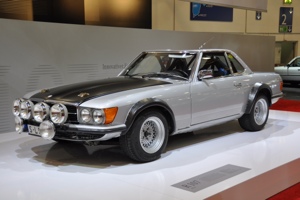 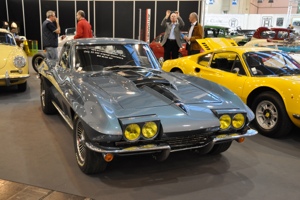 One thought on “The Main Event: Techno Classica 2012” Leave a comment ›

Totally That Stupid – Car Geekdom, and a little bit of life. The Main Event: Techno Classica 2012