I spent a fair amount of time last night – like many nights – surfing around the interwebs looking at various cars for sale. It’s not that I need another car, but with the attention span of a gnat when it comes to my cars I do like to look, and occasionally buy. Last night’s session revealed two cars that interested me – this 1985 Mercedes-Benz 380SL and this 1990 BMW 325iC. Strangely, they were both listed by the same dealer for the same price and they both appear to be in remarkably similar condition: variations on the theme of modern-classic German convertibles.

The 380SL is somewhat the red-headed stepchild of the long-lived Mercedes R107 SL-series. Not quite as fast as the earlier 450SL or the later 560SL, the 380SL was Mercedes’ early 1980s response to the tightening emissions regulations in the US, and early versions used a single-row timing chain that resulted in many unhappy “interference” cylinder heads. Many early cars were converted to the double-row, and later 380s (1984-85) came with it standard from the factory. These days, the 380SL represents a bargain for those looking to achieve the SL experience without paying premiums, and nice cars can be had for substantially less than the more popular variants. Moreover, the 380SL still has a torquey V8 and is a pleasure to drive as a cruiser.

The E30 325iC is a different creature altogether. First-off, it has four seats instead of two, and secondly this example requires that the driver row through their own gears. Believe it or not, some of us actually enjoy doing that!  Where the Mercedes is a low-stress, casual cruiser, the BMW feels like a sports car. While not fast by today’s standards, the BMW is definitely quick, and feels probably faster than it is.  It also handles, with the tight steering and suspension that made these cars popular with enthusiasts, many of whom would buy a new one today if given the option.  Both cars, sadly, suffer from a little bit of a perception issue: the 380SL as little more than a doctor’s wife’s car and the 325iC as the go-to car for the young honeys on Beverly Hills 90210 (the *original* version). Neither reputation is 100% warranted, but there may be a little truth to both…. 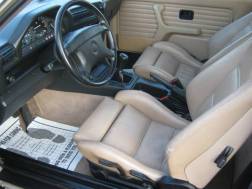 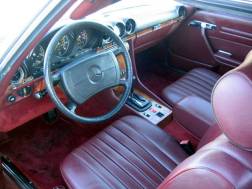 Inside, it is apparent that the BMW is the enthusiast-oriented car from the heavily bolstered seats to the console canted toward the driver – to say nothing of the third pedal and the stick shift. Still, the Mercedes was purpose-designed as well, and I have to say that I have always enjoyed manipulating the trademark gated shifter that was copied by so many until tiptronic and the like came along. Both cars have power windows, air conditioning, and even airbags and abs. The 380SL is much lower-slung compared with the upright Bavarian, but again that doesn’t necessarily translate to road-hugging tendencies. In spirited driving on twisty roads, the Merc’s seats will likely let you slide from one side of the car to the other where the BMW will hold you firmly in place. Unfortunately for my big frame, the side bolsters on the BMW’s seats can be uncomfortable on longer trips – although most enthusiasts love them.

The BMW is definitely the more modern of the two, in both feel and design. It’s easy to forget that the R107 Mercedes SL was actually designed in the 1960s and realeased in the early 1970s, and from the driver’s seat can feel very old school with it’s relatively high cowl (for such a low car), large steering wheel, and long hood. The BMW, in contrast, has a tall greenhouse and relatively low cowl making for a more commanding view out the front. Visibility is somewhat limited in both cars with the tops up and very good with tops down.

Speaking of the tops, both of the soft tops are well-made, provide very good weather sealing and even noise suppression, and are pretty easy to raise and lower – though not quite as easy as, say, a Miata or an Alfa. The listing for the BMW does not indicate power or manual top, but the prospective buyer will pray that it is the manual. The Mercedes has the added benefit in the colder months of a removable hard top. The same was available as an option for the BMW, but this car is not so equipped. The Merc’s hard top really transforms the convertible into an attractive coupe when that is desired, but creates a bit of a challenge to put-on, take-off, and store – especially if you don’t have a helper.

Full disclosure: the 380SL motor in this picture is not from the car listed. It would be great if it looked that good, but the dealer failed to include pictures of the motor in their listing for the 380. Nonetheless, you can see that the aluminum 3.8 litre V8 really fills the R107’s engine bay. Both motors are riddles with vacuum hoses and sensors in a spider web typical of the vintage whose purpose was to move air, fuel, exhaust, and electrons in an effort to clean-up emissions and improve fuel economy.  Any signs of electrical or vacuum issues should be red flags on these cars. Generally speaking, though, both are very reliable units offering potentially hundreds of thousands of miles of relatively trouble-free motoring if well maintained. For me – I’m planning to go and test drive both of them this weekend back to back. My wife has what has become her convertible, so I’m on the hunt for mine – but on a budget. Less than five grand is a steal for the quality of engineering that each of these cars represent, so all things being equal it may come down to which one fits better – like a good pair of shoes…  Stay tuned.