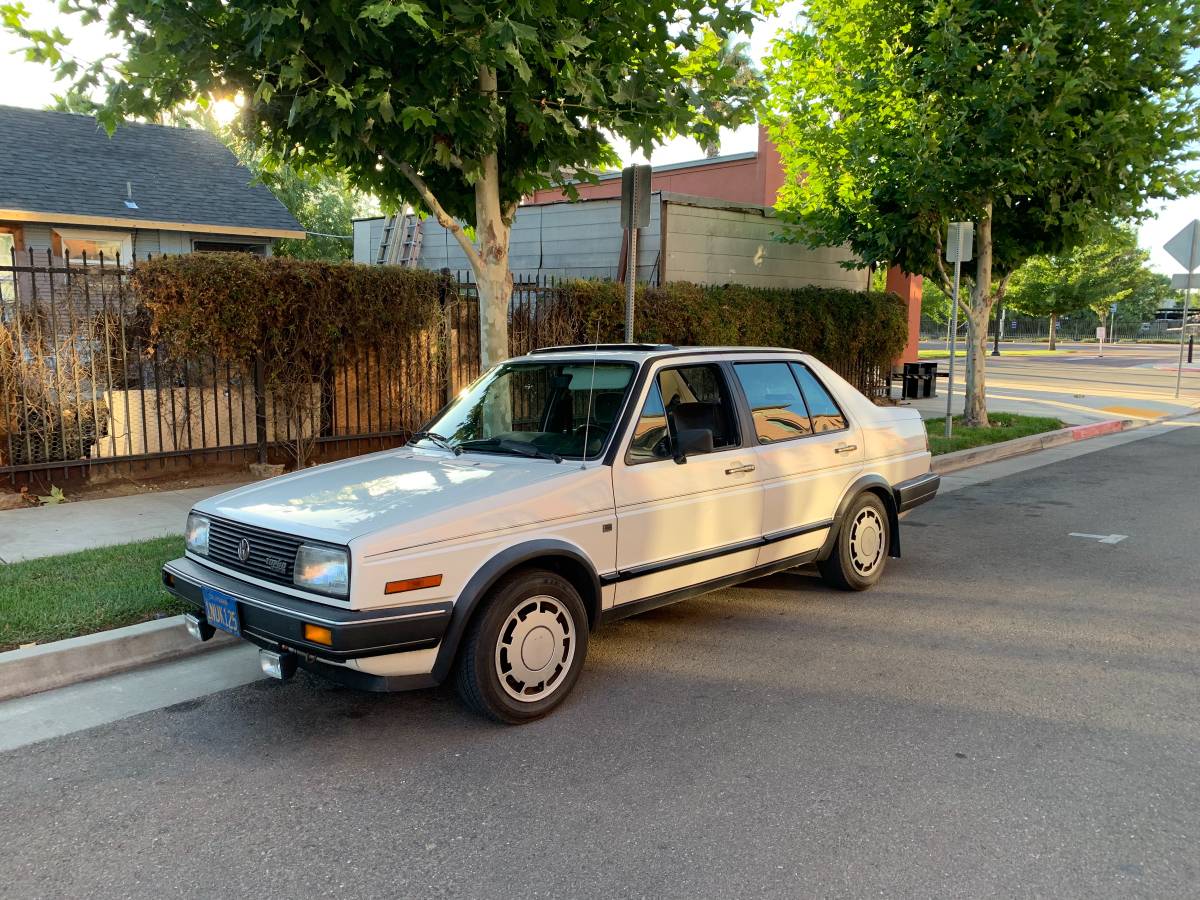 For folks like us who came of (driving) age in the 1980s, the Volkswagen Jetta was definitely on our short list of cars. I remember test driving an A2 Jetta that looked remarkably like this car at Pray Volkswagen in Greenwich, Connecticut circa about 1989. I had no intention of buying, but if I’d had the money I most likely would have. Two of my cousins drove Jetta GLIs, and a third had a GTI. They were just cool. All kinds of German (regardless of where they were built), but without the price tag and stigma of BMWs and Mercedes. Aspirational yuppie cars, if you will.

These days, unfortunately, clean A1 and A2 Jettas seem to be as rare as hen’s teeth – which is why this nice 1986 Jetta Turbo Diesel in Stockton, California for what seems to be a reasonable $5,200 caught my eye.

Truth be told, the cleanliness of the car is only one of the things that appeals to me. I also like the VERY 80s-chic Pirelli P-slot alloy wheels which suit this car perfectly, although I am a little surprised to find them on a diesel. I also like the rectangular fog lights that were a staple for any 80’s car worth its salt along with the black chin spoiler behind them. Oh yes – and the sunroof deflector! If I’d have bought that A2 Jetta, I’d have made it look an awful lot like this one.

As much as this car’s aesthetic appeals to me, what I like even better is the turbo diesel motor.  A2 Jettas were available with both naturally aspirated and turbocharged diesels, the turbos obviously being the more powerful and higher-spec models. Both were 1.6 liters, but the turbo added 16 hp (68hp vs 52hp) and 27 lb ft of torque (98 lb ft vs 71 lb ft). While neither is up for speed demon of the year, the turbo could get to 60mph in just under 14 seconds and could nip at the pant leg of 100mph. Not blinding, but considering real world highway mileage of over 50mpg and even nearly 40mpg around town, even by today’s standards these cars offer impressive economy. And you can have a real live 5-speed manual transmission as an added bonus.  Ain’t gonna get that in a Prius.

This car has about 170,000 miles, which averages out to just 5,000 per year. The seller reports that it has cold AC, so no “just needs a charge” merde here. It also has a recent water pump and timing belt service, likely done as a “while we’re here” when they had to replace a cracked crank gear – but all is reportedly happy now. The current owner bought the car from the original owning family, and also indicates that the factory cruise control also still works. Jetta Turbo Diesels, as the higher-line diesels, also came equipped with such accouterments as fender flares, rear armrest, carpeted trunk, illuminated makeup mirror, and cool sport steering wheel a ‘la GTI. This example has the optional sunroof and AC, but not the power windows. With no engine bay photo or other indication, we cannot say if it has the optional power steering or not – so there is a chance this car could help you build your biceps, too!

We at TTS love good German velour interiors, and this one doe not disappoint. The only seat that even looks like it’s been used is the driver’s and even that one is in good shape. VWs of this vintage had a trick height adjuster for the driver’s seat which made finding a good driving position easy for just about anyone. The stereo looks period correct, and the all-weather mats may just be factory – they look the part. The only thing I don’t like about the interior is the air freshener hanging off the center AC vent – hopefully it’s not masking something nefarious.

A lot of used cars get billed as “barely broken in” despite six figure mileage. A Jetta Turbo Diesel like this one, especially if loved and cared for, is a car that can get away with it. IN 2007, VW went looking for the highest mileage Jetta Diesel in the United States, and found a 1986 Turbo Diesel like this one with over 562,000 miles still on it’s original drivetrain and muffler – a true testament to both the engineering and the value of diligent care and maintenance. I’d gladly don a pair of Ray Bans or Vuarnets, crank up a Cure tape, and cruise as far as this car would take me – which with its 14.5 gallon fuel tank should be somewhere north of 700 miles. Of course, your mileage may vary.