As a Car Geek (TM) and one who leans heavily to cars of the German persuasion (though not exclusively), I’m mildly ashamed to admit that I’ve never owned a classic Volkswagen Beetle. The Beetle is one of those cars that unites car people around the globe – and so many (over about 50 years of age) have owned, bonded with, and/or loved a Beetle. Somehow my stars have never aligned, but a good Beetle remains on my automotive bucket list. The problem is that – like just about every other interesting car, young or old – decent examples are commanding asking prices that, frankly, elevate them to a level beyond what the casual buyer might spend on a Totally That Stupid fun car purchase. That’s why I was surprised to find this remarkably affordable Super Beetle Cabriolet on CraigsList in Santa Clara, Utah, for $7,500. To say I am intrigued would be an understatement. 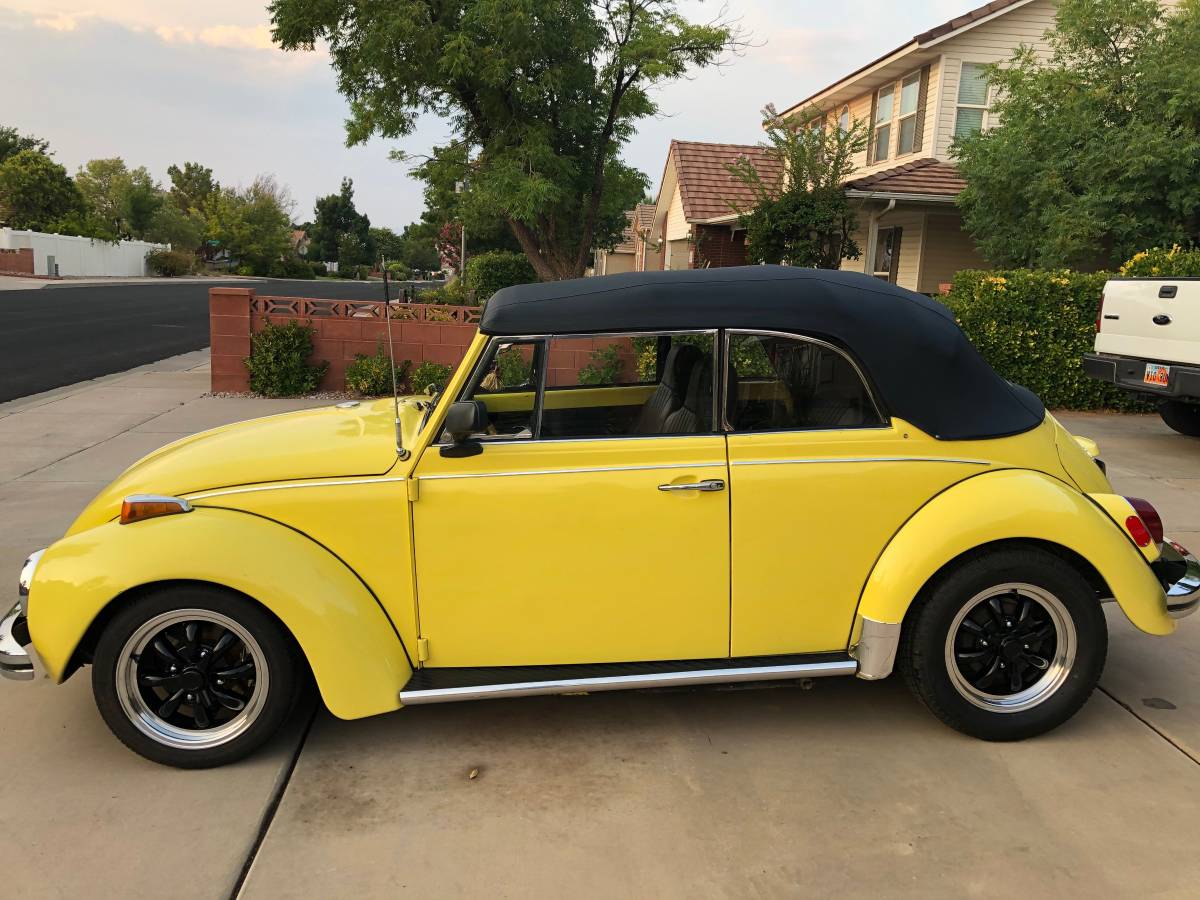 This Cabriolet is a “Super” Beetle, meaning that is has the longer hood (and resulting additional “frunk” (front trunk) space over the original beetle.  European Super Beetles received front disc brakes while U.S. cars retained a drum setup, but this car has had the disc brake upgrade. That pairs well with the suspension enhancements a few years earlier that eliminated swing axles and meant that Beetles wore what was essentially the same suspension setup as a contemporary Porsche 911. This example also has adjustable front suspension – which you get a sense of from the car’s stance in the photos. I see no sign of rust, which for *any* car built by Karmann in the 1970s (think Karmann Ghia, BMW E9 Coupe, etc.) is on the edge of miraculous.

Supers also had a slightly larger (1600cc vs 1500cc) flat-4 aircooled motor which in stock form delivered 60hp and 82 lb-ft of torque. Acceleration from 0-60mph with the bigger motor took about 16 seconds, but average fuel economy was a little disappointing at just 24mpg due in large part to gearing changes – about a 25% reduction from earlier Beetles. This example has been recently rebuilt and sports a single 2-barrel carburetor in place of the stock dual carb setup as well as ported heads. It is not clear, however, what net impact these modifications have on performance.  Perhaps some VW folks might speak to that in the comments?

I am a fan of earlier Super Beetles that still have the flat windshield and old-style dashboard but also some of the enhancements already discussed. Supers also came with larger oil coolers and revised and enhanced cabin ventilation. The interior of this car has had some time and money spent on it, with new leather (!) seats, carpets, and convertible top with glass window. Beyond all that, it has complimentary Coco Mats.  I *love* Coco Mats in vintage German cars – and no, they’re not paying me to say that.  My ’72 280SEL 45. has ’em, as have several of my past cars. They’re just so…. Delicious. 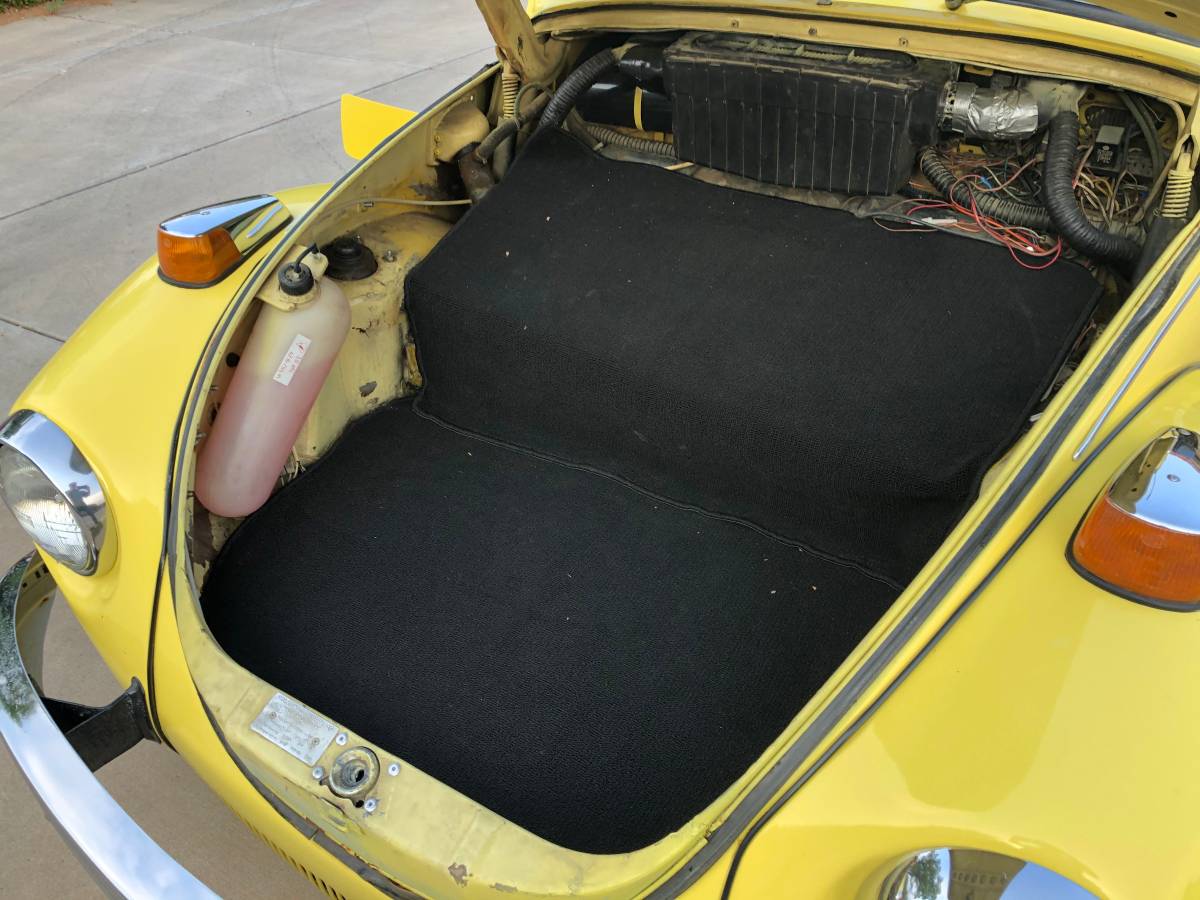 As a family man, I always like fun cars that I can pile my whole family of four into to go for a cruise, go for ice cream, head to Grandmee’s house, or just to putter around in. One of my high school buddies had a Beetle essentially identical to this one, apart from the aftermarket wheels, and it was a blast. It was also a sad reminder to ensure that your fuel hoses are in good condition..  Regardless, if you can accept that a Beetle is not a high performance sports car and rather recognize it as the solid, reliable classic car that it is – one that you can wrench on yourself all day long if you are so inclined and with basically limitless parts availability – then I’d speculate that you could do a lot worse than this one, especially for less than ten grand. So many cars and so little time…..

One thought on “1971 Volkswagen Beetle Cabriolet: Classic Drop Top Cruising for Four on the Cheap” Leave a comment ›

Totally That Stupid – Car Geekdom, and a little bit of life. 1971 Volkswagen Beetle Cabriolet: Classic Drop Top Cruising for Four on the Cheap
Loading Comments...
%d bloggers like this: