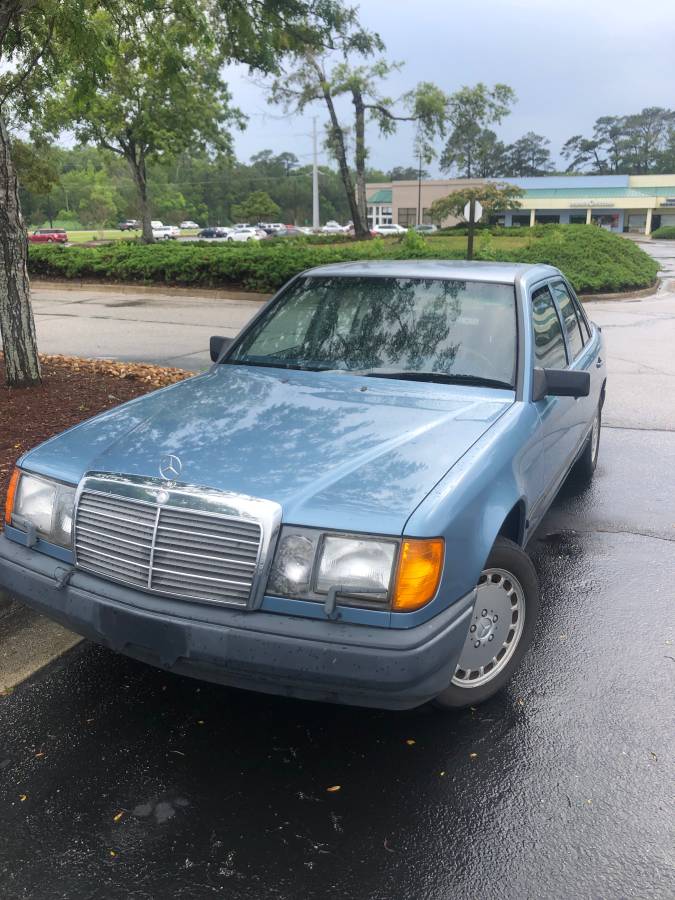 For this installment of Cheap Heap of the Week, I present you a choice of preference: Diesel or Gas. If you’ve spent any time on TTS, you are no doubt aware of our penchant for 4-door bahnstormer sedans. We are particularly partial to the Mercedes-Benz W124 chassis, both of us having owned and enjoyed at least one (in my case it’s like 6). My partner owned the near twin of the 1995 E320 below, apart from the lack of seat heaters and terminal rot.

First up, I offer for your consideration this 1987 300D Turbo in Arlington, Virginia for a paltry $1,700. This vintage W124 diesel had the inline-6 turbocharged 2996cc OM603a diesel which, while not as simplistically bulletproof as the earlier inline-5 OM617, makes for a remarkably quick and reliable oil burner. When new, these motors delivered 148hp and 201 lb/ft of torque, and could make the 0-60mph run in about 11 seconds.

These motors did not require the frequent valve adjustments of their predecessors due to hydraulics, but were a little more susceptible to chain failures and head issues. They also came from the factory with an awful trap oxidizer attached to the exhaust manifold in the engine compartment, but which was recalled and replaced under factory warranty. About 15 or so years ago I went halves with a buddy on a middling S124 wagon with this motor and the original exhaust, but there was a recall letter from Mercedes corporate among the records and manuals that conveyed. Damned if Mercedes didn’t replace the whole exhaust system under that recall on a car with about the same miles as this car (260K) that was nearly 20 years old. 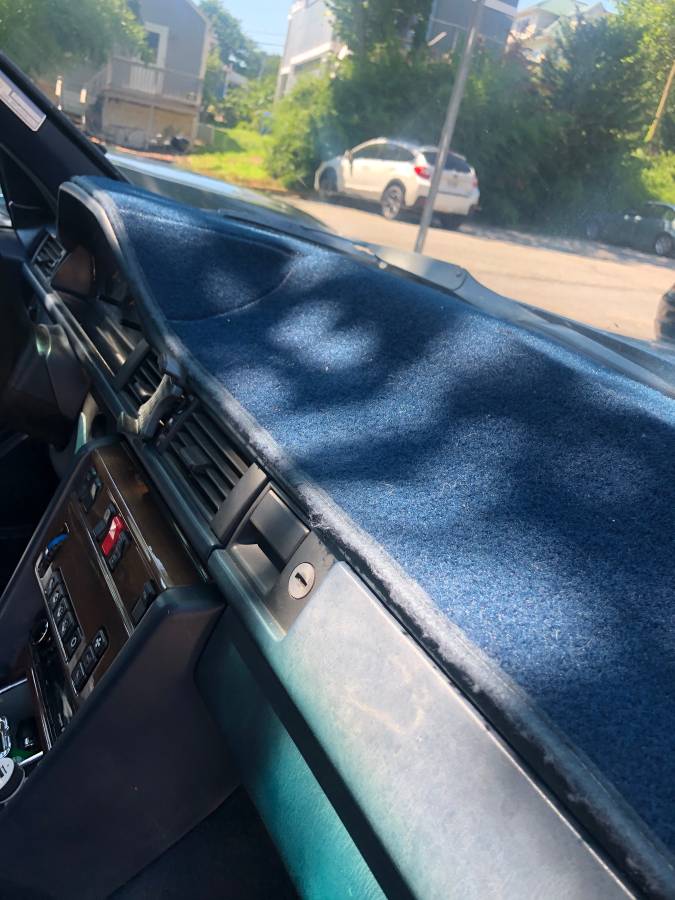 Truth be told, this is a pretty enticing car at the price (especially considering it’s local to me). Per the seller: the car “run excellent, rebuild transmission, the car drives perfect, records available, two set of keys, dent in rear quarter and lower rear door”. Honestly, he had me at “rebuild transmission”, although during this month’s heat wave I’d love to know the functionality of the air conditioning. The reported dents are really just cosmetic, and I think could be repaired with little effort. I would like to know what the dash looks like under that dash rug – and blue Mercedes dashboards don’t generally fare very well with age – but at least the cover fits and matches.

The rear seat (no pictures of front seats) looks practically new, and would be a great place for three of your little people or two of your buddies – wearing masks, of course. In all, this car represents a heckofa bargain, and while imperfect seems to have it where it counts. The rebuilt transmission alone is worth more than the asking price. And with 35+ mpg? Oh, yeah.

Our second contender is this 1995 E320 in Suitland, Maryland for just $1,450. Like my TTS partner’s car, as a 1995 this car is from the last year of W124 production and wears the updated styling consistent with these cars in the rest of the free world (versus the stodgy US-spec headlights) and the updated naming nomenclature. Overall the architecture of the chassis really didn’t change, but the cars were smoothed-out to more closely resemble the W140 S-class that came out a few years earlier. 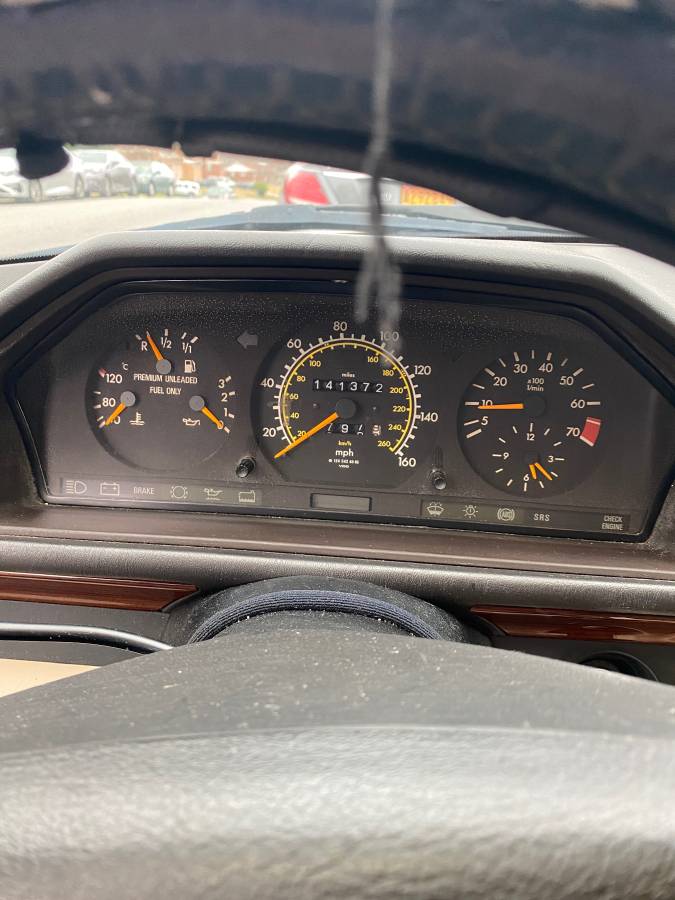 With just 141K miles, this car – even as a gasser – is barely broken-in. We’ve personally seen these cars go well over 200K miles with relative ease. the M104 3199cc dual overhead cam inline-6 delivered 220hp and 229 lb/ft of torque, and could zip the car from 0-60mph in a hair over 8 seconds – not shabby even by modern standards. The motors are very reliable, suffering really from two key things: faulty wiring harnesses made of biodegradable wire insulators and head gaskets. Beyond that, regular maintenance is in order, but these were Mercedes designed when over-engineering was king, and it’s apparent every time you close the door with that signature “thunk”.

This car appears straight and there is no obvious/major rust – not out of the question being a Mid-Atlantic car. The seller has owned the car for a few years, and reports that “most things work including antenna”. Encouraging, if a little light on detail.  He does go on to say that the driver’s seat recline does not function, there is a bad speaker, and the oil pressure gauge is inoperative. Additionally, he reports “over the last few year I’ve changed many parts. Including radiator, a/c condenser, many engine components and a tune up”. That new condenser is an encouraging sign that the AC may just work, but of course he doesn’t actually say that. I don’t love the tinted windows, but that is a solvable problem. 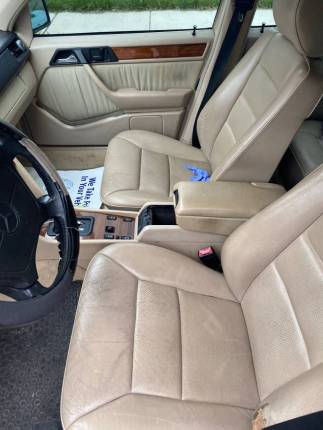 This last photo caught my eye for three reasons: 1) the OEM rubber mats are very hard to find, and effective anyplace where weather happens; 2) this style OEM carpet mats are practically impossible to find these days and much better than the ones you can get; and 3) both mean that the carpets underneath are likely in very good condition. I’m always a sucker for these things. The seats have seen better – or at least cleaner days, but they’re workable, and could be cleaned/repaired/redyed for a couple of hundred dollars.

The seller also reports that the car comes with “tons of service records” – which is never a bad thing. I would be interested to know if those covered either of those key fail points mentioned above.

Either of these great German sedans can be had for less than your $2,000 and even leave a little change to cover any immediate needs. As a diesel fan I am truly tempted by the ’87, and would immediately adorn it with European headlights if I got it, but really have no use or space for it right now. Maybe one of you can get to it before I decide it’s a good idea. Seriously, though, either of these cars is a bargain – and hence our Cheap Heap(s) of the Week!

Cheap Heap of the Week, Totally That Stupid

Totally That Stupid – Car Geekdom, and a little bit of life. CHOTW: Your Choice – W124 Diesel or Gas