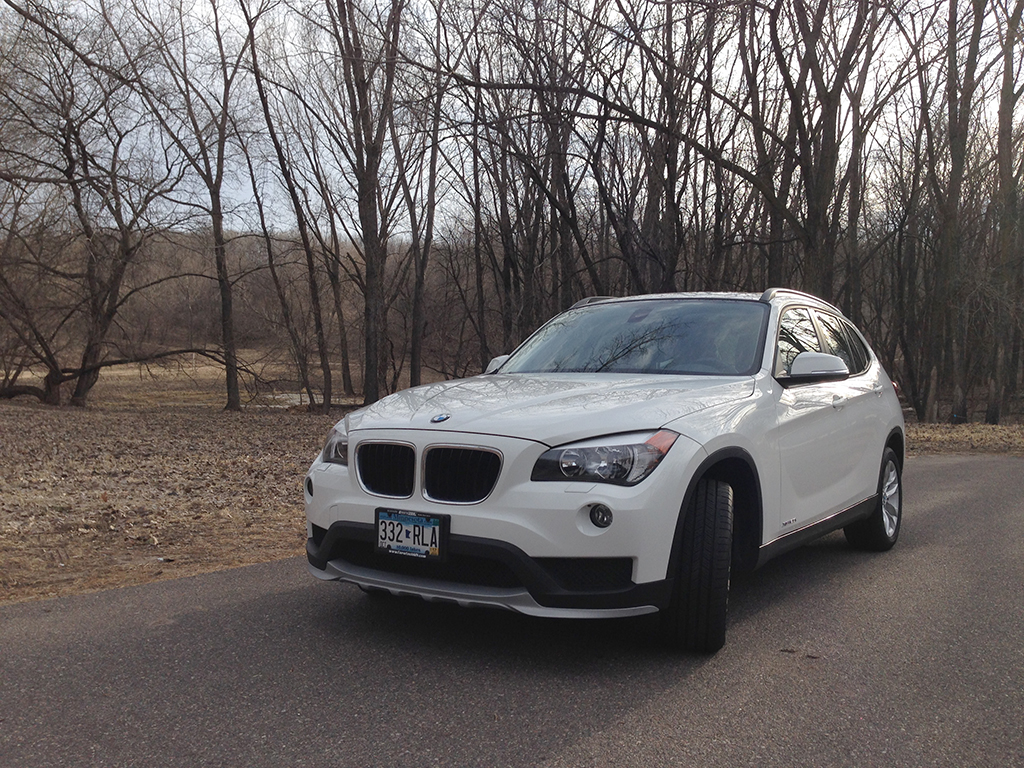 I’ve been driving my somewhat-newly-acquired 1995 BMW M3 for six or so months now. In that time, I’ve found attributes to love and issues to loathe, touching on just about every emotion in between. Safe to say, there is a difference between a 1995 Mercedes-Benz designed by old Germans with slide rulers and a BMW engineered by high school dropouts using a Windows 3.1 machine.

But this isn’t that article.

Recently, the M3 – which still doesn’t have a name, other than “The Green One” – starting making some bad sounds that required immediate attention. These differed from the regular noises it makes, including, but not limited to: door panel rattles, rear suspension clunks, and thumps from the rear parcel shelf and maybe the trailing edge of the headliner. 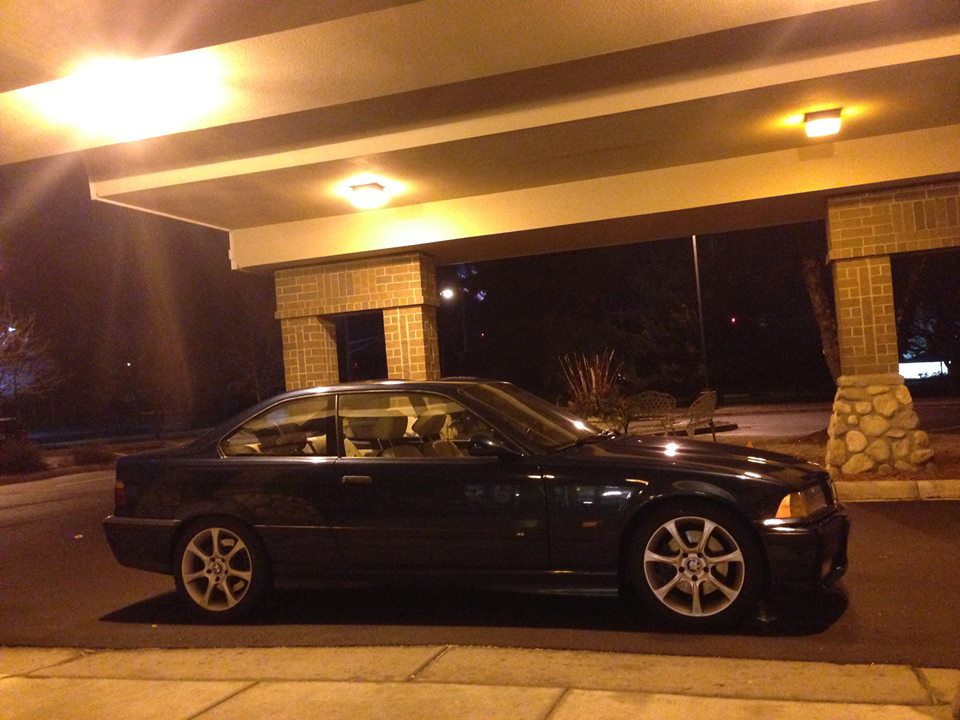 I’ll bore you with the details of the symptoms, the repairs, and the money spent next time around (read: when I get around to it, and if I remember). But the quick onset of the new bad sounds compounded with a lack of free time – which manifested itself in a strong lack of interest – meant that, as painful as I usually find this tack, I took the car to local BMW specialists and all-around good people Eurotech Auto Service in New Brighton, Minnesota.

This still isn’t that article. 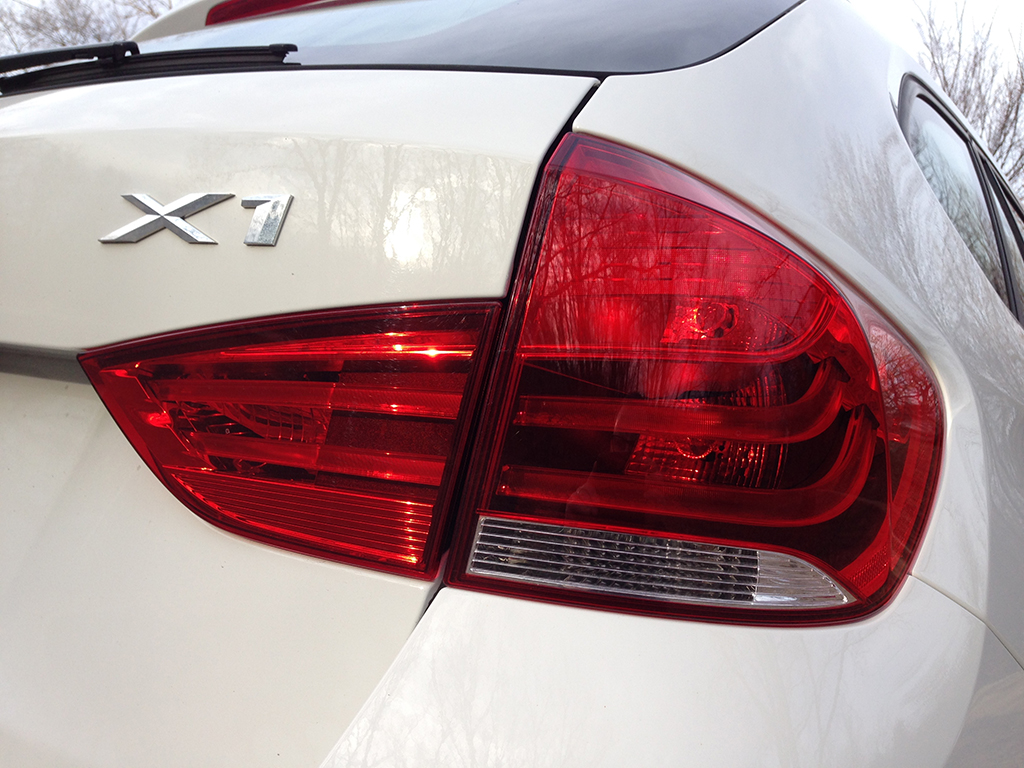 The real reason I’m telling you all of the above is because Eurotech offers complimentary loaner cars. On the day of my visit, the choices were a MINI of some sort, a new Volkswagen Jetta, and the 2015 BMW X1 xDrive28i you see here. I haven’t driven a newer BMW of any sort in several years, and certainly not one motivated by BMW’s N20 2.0-liter TwinPower Turbo.

Rummaging through the glove box, I found the window sticker. With the Cold Weather (heated stuff, including the steering wheel) and Premium (electronic things, panoramic moonroof) packages, the bottom line displayed $38,300 in big, friendly letters. Not cheap, but it’s probably about right for a slightly lifted BMW station wagon wearing a roundel but few options. More about this later.

I will preface the rest with: First, I am extremely grateful to have had a loaner car, and props to Eurotech for offering them. Since our fun summer car is still in hibernation, having access to wheels is paramount. Second, comments I may have made in meatspace about the X1 being “utter rubbish” – claimed after the first few hours behind the wheel – may have been exaggerated. I just had to adjust my expectations.

You see, it’s not that the X1 is a bad car. Indeed, in many ways it’s a very good car. At first blush, it just doesn’t seem like a great BMW. Why? Because there is precious little here that initially screams BMW. The seats are reminiscent of older models in their shape and firmness. You’ll recognize the off-gassing of fresh Nevada leather if you’ve been in any mid-line BMW from the last ten years. The steering wheel is absurdly fat, though it could be mistaken for the helm from many other cars.

The elephant under the hood is that N20 turbocharged four-banger. I get the whole Efficient Dynamics thing, but this thrashy little buzzbox is an insult to BMW’s middle name. I am not a four-cylinder snob – even BMW have made some great ones – except in engine compartments where an inline-six should clearly reside. The eight-speed torque-converter automatic behind it upshifts as quickly as it can – because “ED” – and therefore occasionally gets caught out, especially in stop-and-go traffic: “What gear am I in? Um, THIS ONE!” Bog, shudder, clunk. Welcome to this one.

The 240 horsepower allegedly on tap feels unevenly applied around town, which is odd since the 260 lb-ft torque peak happens at a low 1250 rpm. In traffic or around town, rolling into the throttle produces little forward movement, even at that engine speed. Firewall the throttle and it responds, but by that point you’ve almost rear-ended whatever is ahead. Bumping the Direction Joystick (I have no pithy name for that ridiculous gear selector) over to S exacerbates this behavior. How on earth is a BMW drivetrain this terrible?

When the road opens up a bit, BMW reminds us they can engineer a car that handles varied road surfaces and conditions very well without resorting to electronic shock absorbers, sentient roll bars, and paranormal seat bolsters. The ride around our metro area – ranging from cratered freeway wasteland to baby-butt-smooth double-s sweepers – is firm but never rude. While the steering feel is so light as to barely exist – it seems X1 xDrive models of this era still used a hydraulic rack – the run-flat Goodyear Eagle LS meats stick well and do their job remarkably quietly. At rapid street speeds through corners and turns, handling is surprisingly neutral with minimal body roll. Is it s 1995 M3 with a dropped TC Kline suspension? I’ll leave that up to you.

The driving position is BMW-good, but some of the interfaces are downright goofy. Keyless access from outside the car requires two pulls of the door handle, when it should really require only one. If I have a key fob, why do I need to insert it into the dashboard and then push the button? The Direction Joystick is absurd, and if you don’t know to push the button on the side, the animated pictogram on the instrument cluster won’t help you. The turn signal stalk is easy enough to figure out, but there wasn’t really a need to redesign it. Where the hell is the button for the heated steering wheel?

To offset the bitching a little, I can offer the seat heaters are killer. When you turn off automatic engine stop-start, it stays off, even after cycling the ignition. While different, the interior ergonomics are top-notch, and the lighting – from the gauges to the center stack to the two little red LEDs overhead – is brilliant. In fact, the overall design is swoopy-new and classically BMW at the same time. iDrive was merrily conspicuous by its absence, and that center stack didn’t seem overly awash in buttons. Despite their propensity for expensive failures, I am an absolute sucker for a panoramic roof.

BMW calls the X1 – like all their trucks – a Sports Activity Vehicle, marketing speak for an SUV or CUV. If this car is either of those, I’d go with CUV. It is a crossover in the truest sense, a slightly taller 3 series station wagon, with minimal off-road pretensions and ground clearance low enough to project an awkward stance. It looks like it was run through a Distort filter. 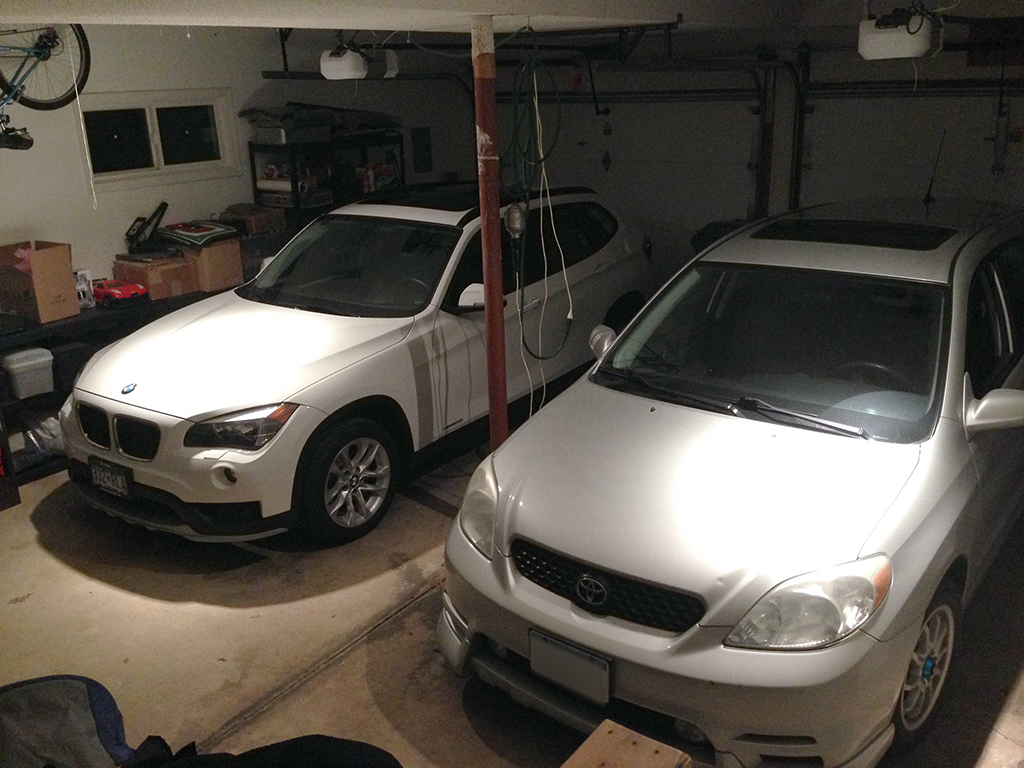 Further, it’s really not that big. Parked in the garage next to our 2004 Toyota Matrix XRS-6, the X1 looks a little wider and a little longer – especially in the tush – but not taller. You actually sit a little higher in the Matrix. Apples and oranges to be sure, but it begs the questions: Does that make the Matrix a CUV? Does that make the X1 a hatchback? Aren’t they both just station wagons? Do any of the new vehicle classifications make any sense whatsoever?

The value proposition is hard to swallow, unless you’re already accustomed to $55k 3 series and $75k 5 series. As mentioned, two years ago this X1 was approaching $40k with room to spare. Building it today with the same options, it’s over $41k. Which seems like a lot for a small wagon wearing roughly 1/8 of the available options. What other car-based CUV could you buy with that dough? I can think of at least a couple. And while they may not have the handling prowess of the X1, they will have smoother engines, more room, and likely every conceivable option.

The next morning, my second with the X1, I pulled into the parking garage next to my office. Exiting his own car-based CUV station wagon, one with more ground clearance and a 3.6-liter six-cylinder engine, was a colleague. It occurred to me his ride is probably a better car in just about every way except maybe handling and that pretty red dashboard glow. Certainly the value is greater. We chatted and I mentioned how I thought the X1 was rubbish, doing nothing particularly well, except brandishing its badges. 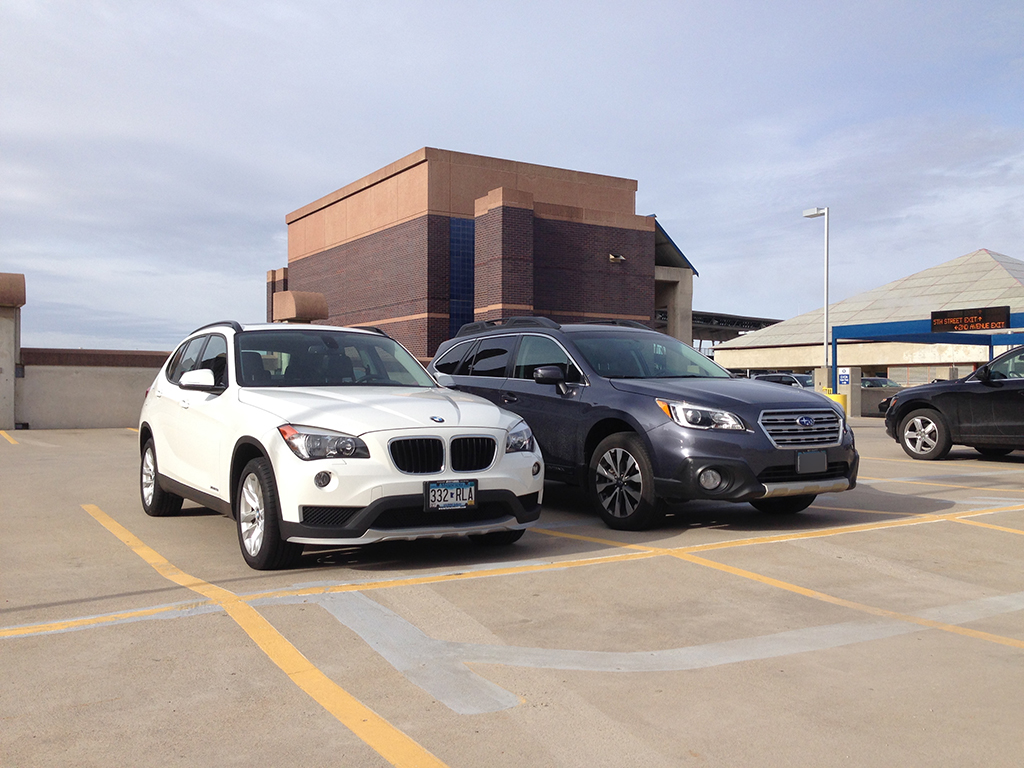 The thing is, after a few days behind the wheel, the car had apparently adapted to me. Or I to it, as the case may be. I had mastered the dumb Direction Joystick and the unfamiliar turn signal stalk. Regular driving on the freeway became as easy and smooth as Sport did on surface streets. It seemed to be in the correct gear more often than not. Pitching the car hard into my favorite s-bend near the kiddo’s school, it became easy to place the nose and roll into the boost, catching the weight transfer on the uphill, off-camber exit. It started behaving like a BMW.

To be clear, all BMWs used to behave like BMWs, no matter who was driving. Now, because of increased sales volume demands, primarily to “non-believers” (read: regular brand-conscious consumers on a three-year lease cycle), the cars have to cater to everyone. It’s not always clear they (the cars, that is) haven’t been dumbed-down for the Toyota RAV4 buyer stretching his or her monthly budget for an X1.

In this case, the good stuff is still in there, but it’s hiding a little. The X1 isn’t rubbish. It’s just different. It’s not the BMW I know, but maybe it’s the way BMW is now. Maybe it’s just what it is.