We have written a lot about the Mercedes W126 S-class (you know, when we get around to writing at all!), but for me that’s largely because they are among the best luxo-barges ever produced. Modern enough to offer an excellent driving experience, and old enough that they’re not entirely bogged-down with technology certain to strand you in some catastrophic symphony of warning lights. Besides, they are so completely logical in their engineering and design – my Dad always referred to his as fitting together like a Chinese puzzle – that even incompetent hack mechanics like me can wrench on them. This pretty 1985 500SEL in Fort Worth, Texas comes with a little bonus surprise of its own. There weren’t many options available on U.S. market cars, but this car has one of the coolest ones. Find it here on eBay with a buy it now price of $9,995 or best offer.

Okay, first things first: given the choice I would prefer either a Euro-spec 500 or a U.S.-spec 560 to a U.S. 500, mainly due to the fact that for our market the good folks made them heavier to comply with DOT and made them slower to deal with EPA. In fact, in U.S. specification the 500SEL’s 5.0 liter M117 V8 delivered only a paltry 184hp, although torque at 247 lb/ft meant that acceleration was perfectly acceptable for the day in the low-mid 8 second range to 60 mph and top speed was well over 134mph. That said, the Euro 5.0 and the 5.6 liter M117s could pull 6.5-7.2 second 0-60 times and top speeds nearing 150mph. Regardless, the U.S. 500SEL is a very nice cruiser and can certainly get out of its own way – and at this point I would assert that condition and options can trump some of the debate about powerplants.

There are a couple of things, however, that would most definitely need to be addressed on this car. First, those headlights. It’s no secret among my Car Geek friends that I loathe U.S. specification headlights on any classic Mercedes. The W126, in particular, was designed with aerodynamics at the forefront of the thought process. To then slap these hideous sealed-beam atrocities with the profile of small billboards on the otherwise sleek front end – well, it just needs to be corrected. Budget about $500 for the job, assuming you can follow simple instructions and do it yourself. Second, by today’s standards, the 14″ wheels are simply substandard. Besides, it’s hard to even find decent rubber in the right size. As a purist, I am a fan of OEM-style 15″ “bundt” alloys which can be found all day long on eBay for between $800 and $1200 for a set, but there are cheaper and larger options that work alright, the best of which for my money being the Tire Rack ASA 16″ 8-hole style which can be had for about $450/set. 16-hole 15″ late W126 alloys are also a common upgrade. Any of these will improve handling somewhat and open up the choice of available tires. And they all fill the wheel wells nicely. The final exterior touch would be to replace the big U.S. bumpers with the svelte European versions, but to me that’s more time and money than it’s worth. I will tell you that the TTS team is divided on this matter….

1985 was the first year that saw a driver’s airbag and antilock brakes standard on the 500SEL, and in a car as clean as this one the hope would be that both systems are in good order. The burled walnut wood in this car looks to be in good condition, and here at TTS we are big fans of black dashboards and steering wheels – it’s a thing. The cream beige leather interior complements the metallic Cabernet paintwork nicely, and everything here looks to be in condition consistent with the car’s low 70,000 miles. Note that this car’s front seats are half of the four place seating option. These are the sport seats which are much narrower and more bolstered than the standard barcaloungers in your average W126 sedan, although standard on the SEC coupes. They also retain the 500SEL’s standard seat heaters, which my wife will tell you is worth a king’s ransom. Looking around the front cabin, I love that this car still has its stock Becker stereo, which can be modified with an iPod connection. 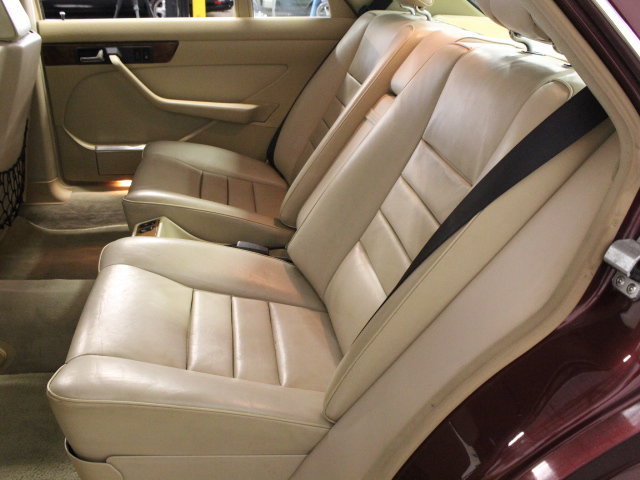 It is this back seat, however, that makes this car special. Ticking the order box for this option basically gave buyers the “executive” package complete with individual heated, reclining rear seats with no center seat – assumedly because you need that space for your very important paperwork or your slick 80s-era mobile phone suitcase or portable fax machine. It’s pretty trick, and you’re not likely to see another W126 with this option at your local Mercedes concours. All that would make this option even more rare would be either velour (which would likely have long ago disintegrated) or buffalo leather – which is really a pretty awesome suede-ish leather which was saved for the most exclusive of executive sedans like this and the BMW 745i.

And at this point you may be wondering what the big deal is, but that’s just it: you have to be a special brand of geek for this to turn you on, and I wouldn’t look at this feature as some great future collectible Mercedes thing. With over 800,000 126 cars produced, these will never be Gullwing collectible – especially the sedans. In the spirit of full disclosure, as I write this I am impatiently awaiting the arrival of my own W126 sedan – a 300SD. I’m buying it because I am partial to the diesel, and mine comes with the fairly-unusual-for-the-1985-and-earlier rear headrest option. It ain’t four place seats, but it’s still tickles my inner Geek. Regardless of the W126, a well-maintained one, even 24 years-on from the newest one, can be a reliable daily driver with both gas- and diesel-powered versions delivering mileage well over 400,000 without major rebuild. Change the oil, tend to the little things, and drive it until it dies. Or (and maybe more likely) until you do.