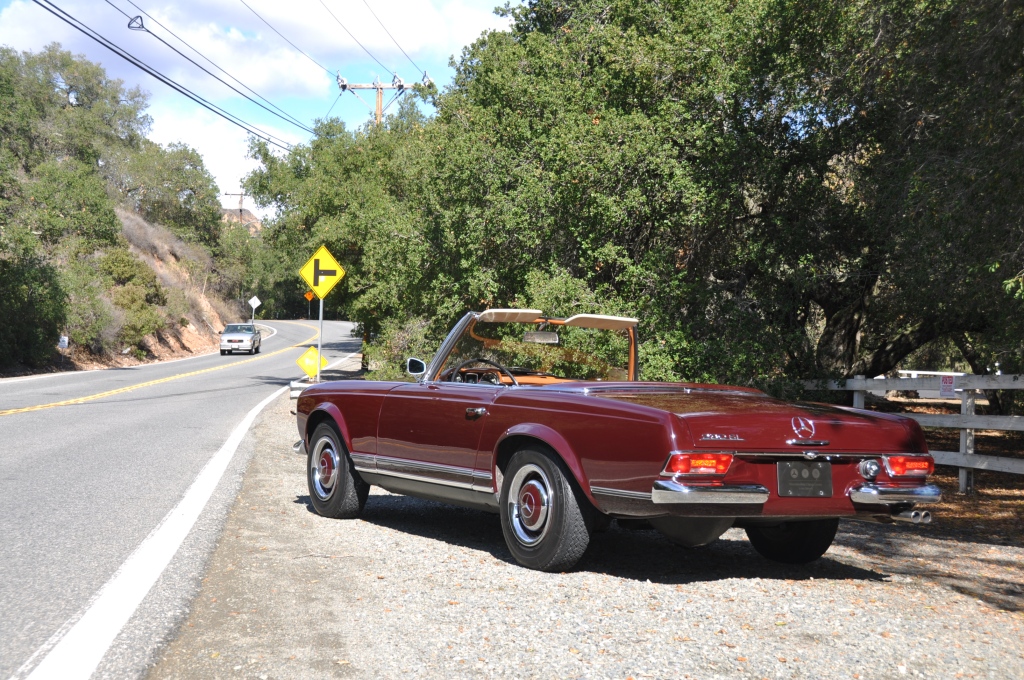 It is no secret to my friends, family, and readers that I am a Mercedes Geek. It goes back to my youth when my Dad – Dr. Mechanical Engineer – regaled me with stories of the overengineering wonders that Mercedes cars were (it should be noted that a few short years after I started driving he changed alliances to Lexus). The first new car I am old enough to remember my parents buying was a Mercedes, I learned to drive on a Mercedes, and when I was finally married and on my own, I bought my first. I have since owned about fifty of them from across the range. Suffice it to say that I have a passion for Mercedes cars, especially the classics. So after a couple of days of Porsche immersion, meeting up with the good folks at the Mercedes-Benz Classic Center USA for some Benz time was like putting on your favorite pair of shoes. And then driving them. 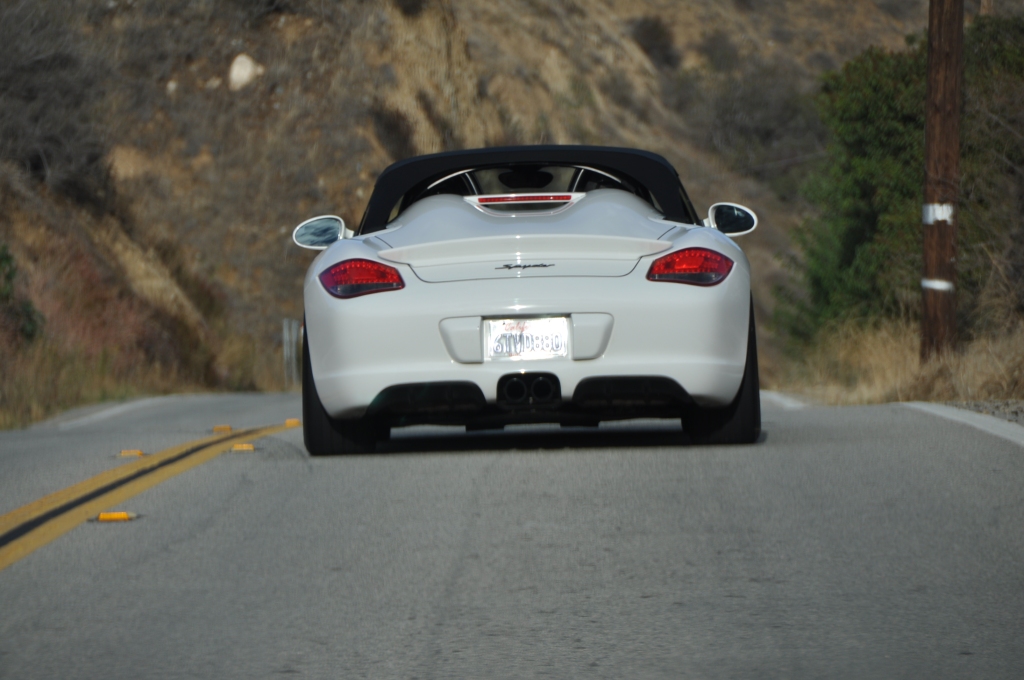 Don’t get me wrong: I have had a potentially life-changing few days looking at and playing with all manner of Porsches, from our trusty companion for the weekend – the 2014 911 Carrera S – to Magnus Walker’s fabulous collection, and even some fantastic Porsche “reimaginations” that I’m not even allowed to talk about. I spent a fair amount of time barreling up, down, and around SoCal’s famous canyon roads looking at the ass end of a Boxster Spyder, and I have concluded that I am overdue for something small, fast, and fun. But that’s a story for another day. Today was about Mercedes, and a range of brilliant cars in a remarkably short period. 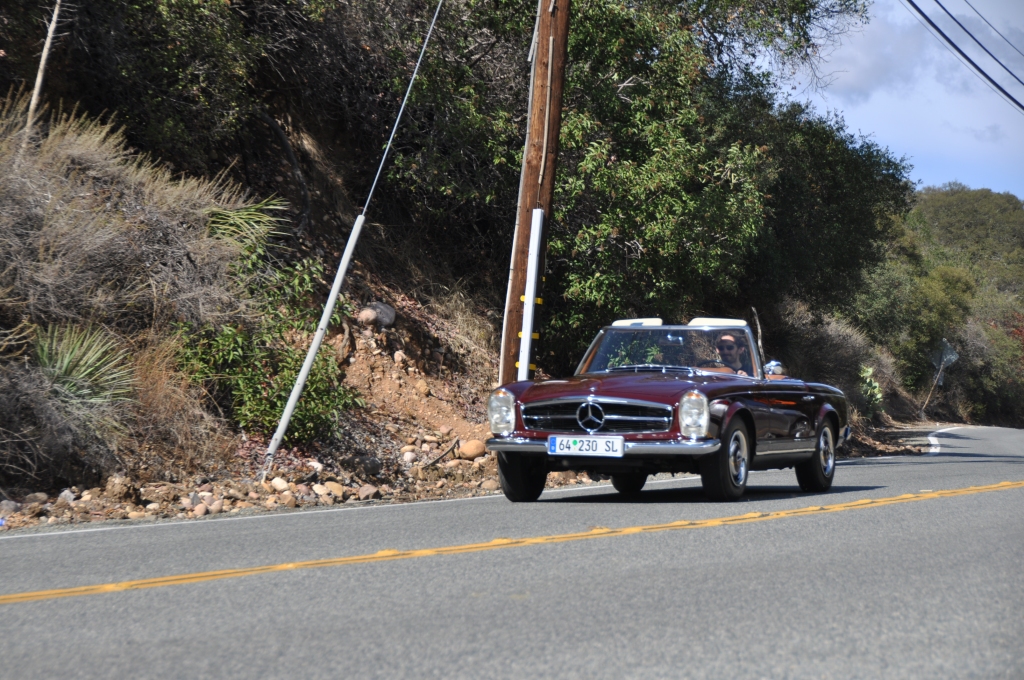 First up was a gorgeous, 36,000 mile original 230SL Pagoda roadster. We had a Pagoda – a 1969 280SL – several years ago, but this car was different in two critical ways: 1) it doesn’t have a spot of rust anywhere on it; and 2) it’s a stick shift. The automatic transmission in our car seemed like a neverending source of angst amidst other concerns with the car that finally drove us to sell it on after about a year of ownership. I always wished we’d bought a manual instead, partly because they’re less common and partly because, especially on classic cars, I prefer to change my own gears. This burgundy beauty was the first manual Pagoda I’ve driven, and I was not disappointed. Sure, it felt like a complete dog after 2.5 days in a 2014 Porsche, but when it comes right down to it the driving experience was just lovely. The car has a great raspy voice to accompany the other sensory experiences that one comes to love in a car rapidly creeping-up on fifty years old. I would have another Pagoda in a heartbeat provided it was as good as this one, but given the market for them I’ll venture that the odds of that happening are pretty darned slim. 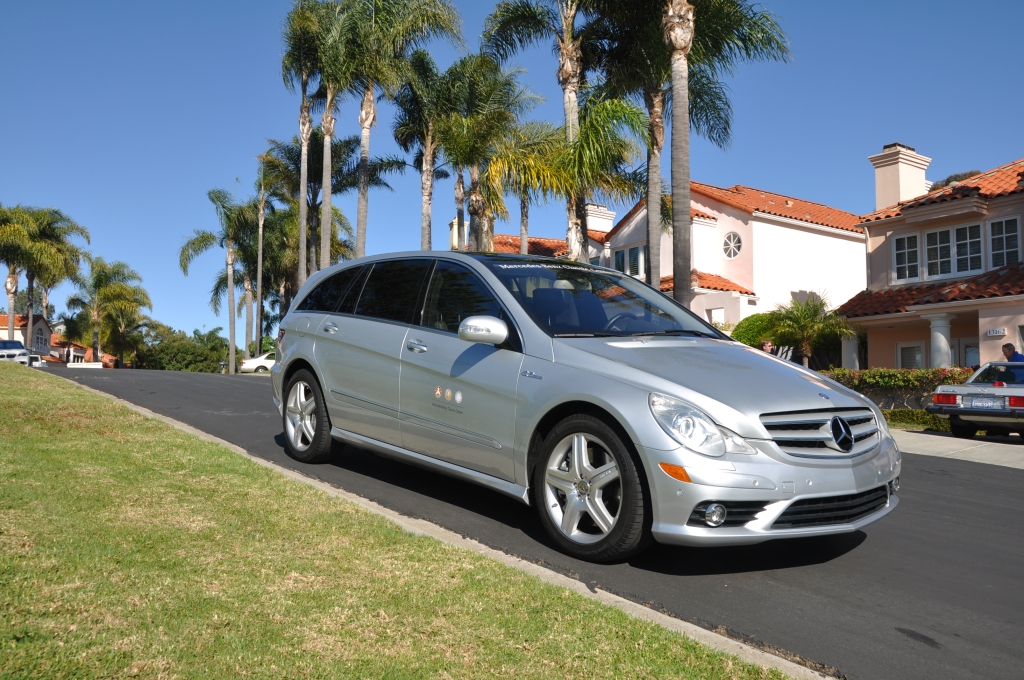 From the Pagoda we moved on to what is probably as opposite a car as has ever existed in the Mercedes lineup from the Pagoda: the R63 AMG. The truth is that the R-class has never been the sales success that was hoped for it. Many consider it a car that was just a little too far ahead of its time, and those who actually drove them and decided to take it home with them seem to really like them. Still, the R63 took the R-Class formula and doused it in jet fuel – and lit a match. The car is powered by what is essentially the same motor as that in the C63, E63, S63, SL63, SLS and so on. It’s a torque-laden beast of a motor, and transforms what many perceived as little more than another attempt at soccer-mom transport into something outright demonic. Power is front and center with just a blip of the throttle and 0-60, well, it’s not many a minivan that can embarrass just about every Ferrari built before about 1999. Inside, the car has all of the requisite AMG accoutrements including multicontour driving dynamic seats with suede inlays, suede headliner, stiched leather dash and door panels, and a speedometer that goes up to 200mph. Without a limiter, it would probably get pretty close to that number. After some time behind the wheel I kick myself for not looking more seriously at one of these that I found about a year ago as a potential replacement for our family E320 4Matic station wagon, especially considering that there were only 80 R63s produced – ever. Sigh.. 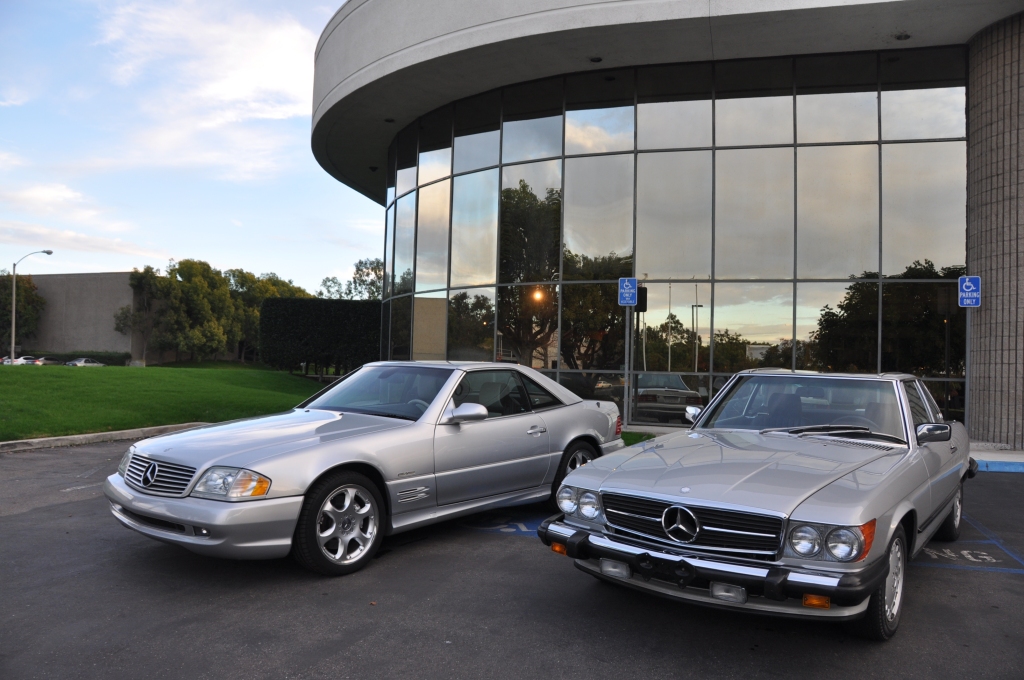 Last on today’s agenda was a pair of two more generations of Mercedes SL roadster: a 1987 R107 560SL and a 2002 R129 SL500 Silver Arrow Edition. Both of these were the last of their series, and conveniently, they were both silver and the Classic Center has them both in their collection. I’ve always been a little intrigued with both of these cars as potential collectible classics, especially in top-of-the-line end-of-the-series trim. Both of these are extremely low-mileage examples, which means that they are most likely VASTLY different from similar cars that I might have the means to bring home, but they also have me a good idea of how each runs, feels, and drives. The R107 560SL is to many the iconic SL – the one from the 1970s and 1980s made famous by the likes of Wonder Woman, Jonathan Hart, and Bobby Ewing. They are lovely cars, and with the 5.6 liter M117 motor they pack quite a punch. The R129 that replaced the R107 is more modern in every way. Both cars are best described as casual but powerful boulevardiers, but the R129 has some potential lacking in the R107 thanks to its 315+ hp M119 V8 – the same unit that powers the famed 500E – it’s sunken seating position and sturdier structure, and its big, fat, sticky tires. Each is a quality piece but the one to choose, should one find themselves in the market, is the one best suiting their lifestyle. If it’s a casual classic with somewhat fragile looks then the R107 would be the choice. If you want a little more performance and a more modern driving experience then the R129 would be the car to choose. I’d have either, but in my present performance-oriented mood it’s the R129 that would probably capture my heart – and my money. That is, of course, if I didn’t buy a Boxster first. 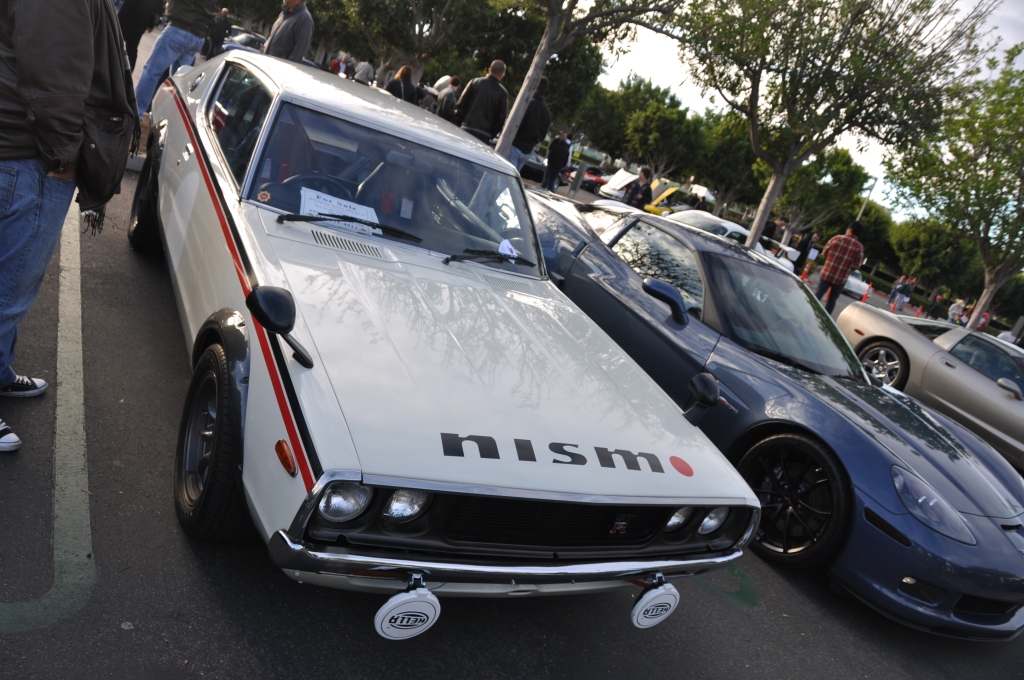 As with every trip I make to the Classic Center, we ran out of time well before we ran out of cars. I guess that means that my drive in their 300SL roadster rally car and their incoming 500K will just have to wait until next time. We did, however, find a little time to stop by the Irvine Cars & Coffee which is the current iteration of the original Cars & Coffee that started life on the Pacific Coast Highway some several years ago but outgrew the little shopping center that hosted it. As always, there were all sorts of cool cars there, my favorite being this old school right hand drive Datsun GT-R which could be yours for a paltry $41,000. And here are some of the others: