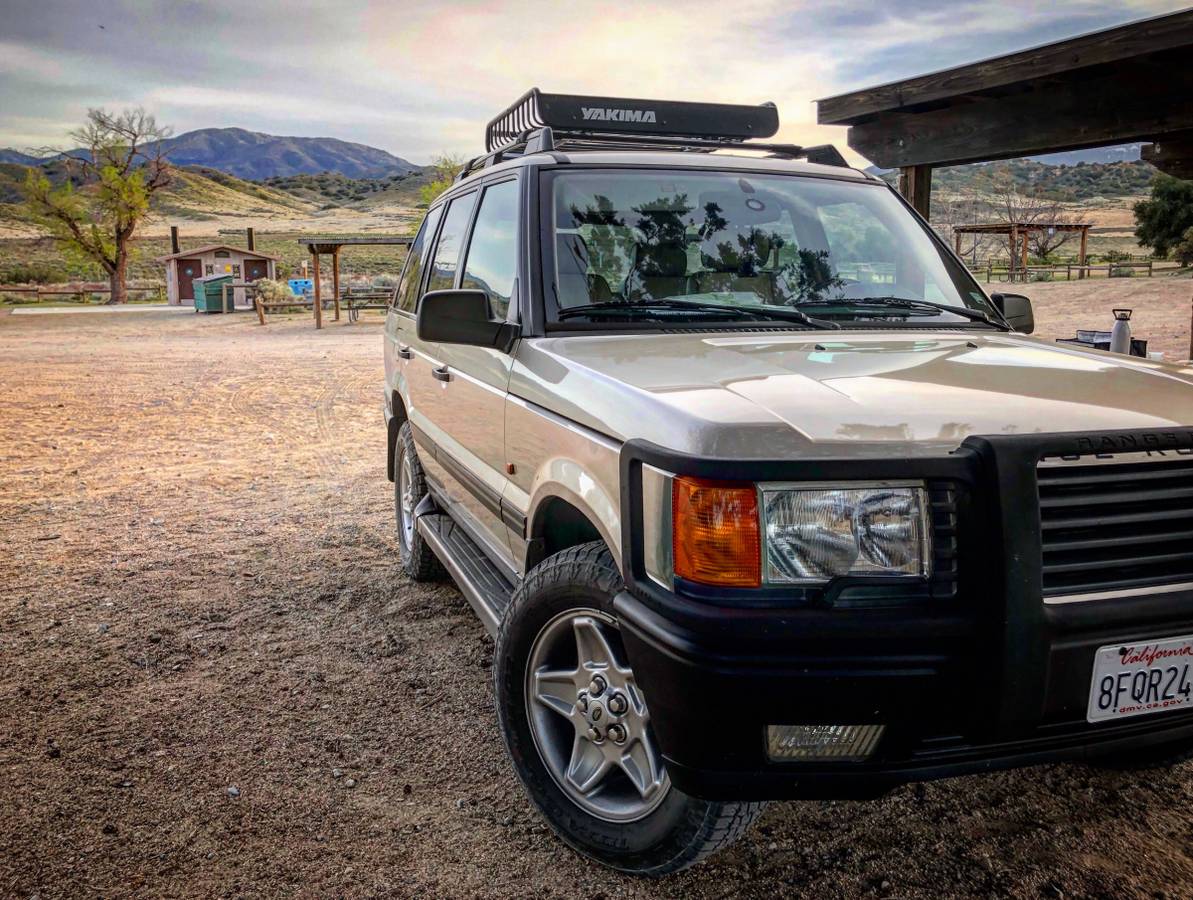 While your humble servants here at Totally That Stupid will always extol the virtues of the sports car and the sports sedan over most other vehicles save the station wagon, we are not opposed to the sport utility concept. Having a high- or higher-riding all-wheel-drive vehicle can be useful in many situations, from traversing the fields of your hobby farm to battling a surprise winter storm to merely jockeying for position at the kiddo’s elementary school pick-up line.

Does a sedan perform some of these tasks? Or a station wagon? Or, heck, even a pickup truck? They sure do, individually and collectively. Some even do these tasks better than an SUV. But since we like wagons, let’s not completely dismiss some of these jacked-up estate cars.

Like every other vehicle featured here on TTS, an SUV is required to have a personality or at least a set of features to render it unique against the bland masses. Despite my day job (which is not selling Chevrolet), I have trouble telling the difference between a Blazer, Trailblazer, Trax, etc. (I think they go “medium,” “really small,” and “small,” respectively.) But I can tell you which Toyota is the 4Runner and which is the Land Cruiser. What’s the difference? Those Toyotas have personality, while the Chevys are rental fodder.

That brings me, in a roundabout way, to the 1995-2002 Range Rover, also known as the P38 chassis. That also brings me to the joke about “personality” frequently equaling “personality disorder.” I am not here to tell you, despite all sorts of personality, that all P38 Rovers are good cars. On average, they are not, and some are not by a hobby farm mile. But I assert that a decent P38, looked after with no small amount of zealotry, can be a solid second or third vehicle for your homebound household.

There are few better off-road vehicles, and fewer yet that combine that prowess with on-road ability. The P38 still has a presence, even though several Range Rover generations have passed between it and the current model. They just look good. Interiors are handsome and functionally luxurious, with only slightly maddening control layouts. Though simple by today’s standards, the P38 can be considered fully loaded with options and electronics, some of which may still work.

So how do I rationalize a P38 as anything other than the financial and mental equivalent of jumping into a live volcano? By following Totally That Stupid’s Cardinal Rule #7: Always Have A Reliable Japanese Brand Around. Ironically, in our stable that role is filled by an SUV that is really a tall station wagon. It’s the circle of life, I tell you.

To perhaps state the obvious, there is no sense in buying a bad P38. The definition of “bad” is pretty well documented: head gaskets, cooling system, cylinder block liners, air suspension, electronics generally and HVAC specifically, sagging headliners, rust. Until recently, only a few individual issues would condemn a truck to the cheapest bowels of Craigslist. Now, however, values are rising, due in no small part to the steadily climbing values of the Range Rover Classic. Also, P38s are pretty cool, modern enough to be used daily (stop laughing!) but also with a classically British aesthetic lacking in many of today’s vehicles.

I have only a little experience with P38 Rovers. The one that most easily comes to mind is when friends of ours brought over a very pretty dark green on tan example for which I was asked to take a cursory look. They were Ford Explorer people, and thought the Rover would be a nice step up. The truck was from some local used car lot, so it of course had several of the above issues, including a leaking water pump and valve cover gaskets, air suspension fault lights, and the illuminated “book” icon on the HVAC control panel. But with its commanding view of the road and subtly wuffling V8, I absolutely loved the way it drove. The air suspension held pressure – the car was very comfortable – but wouldn’t change height on command. Still, I recommended they not venture down this path; while I love these people dearly, they are not the type to suffer a bad Rover.

But I am not as smart as the advice I tend to give others, and so every fall I come back to this generation of Range Rover. The terrible ones are cheap, but I don’t need another project (I said stop laughing!). No, I think I’d spend more than CHOTW money on an example with some of the above list already attended to. These days I don’t need it to be an every day car, but rather only a sometimes car. A P38 could eventually replace my 2001 BMW 330i in that role. Or, maybe I just need a fourth car.

Searching around shows there aren’t a lot of great P38s for sale outside of some of the larger online automotive auction sites that are not eBay. What I’m shopping for is not the boilerplate on what a nice car this is, look how the paint shines, new tires and a clean Carfax, and boy did my wife/husband/kid/nanny love driving it. Those are important, sure, I suppose, but what I really want to know is how current is the maintenance, what have you not already repaired, what warning lights are on, and could I drive it home from wherever it sits. Thusly, many a P38 are automatically ruled out. 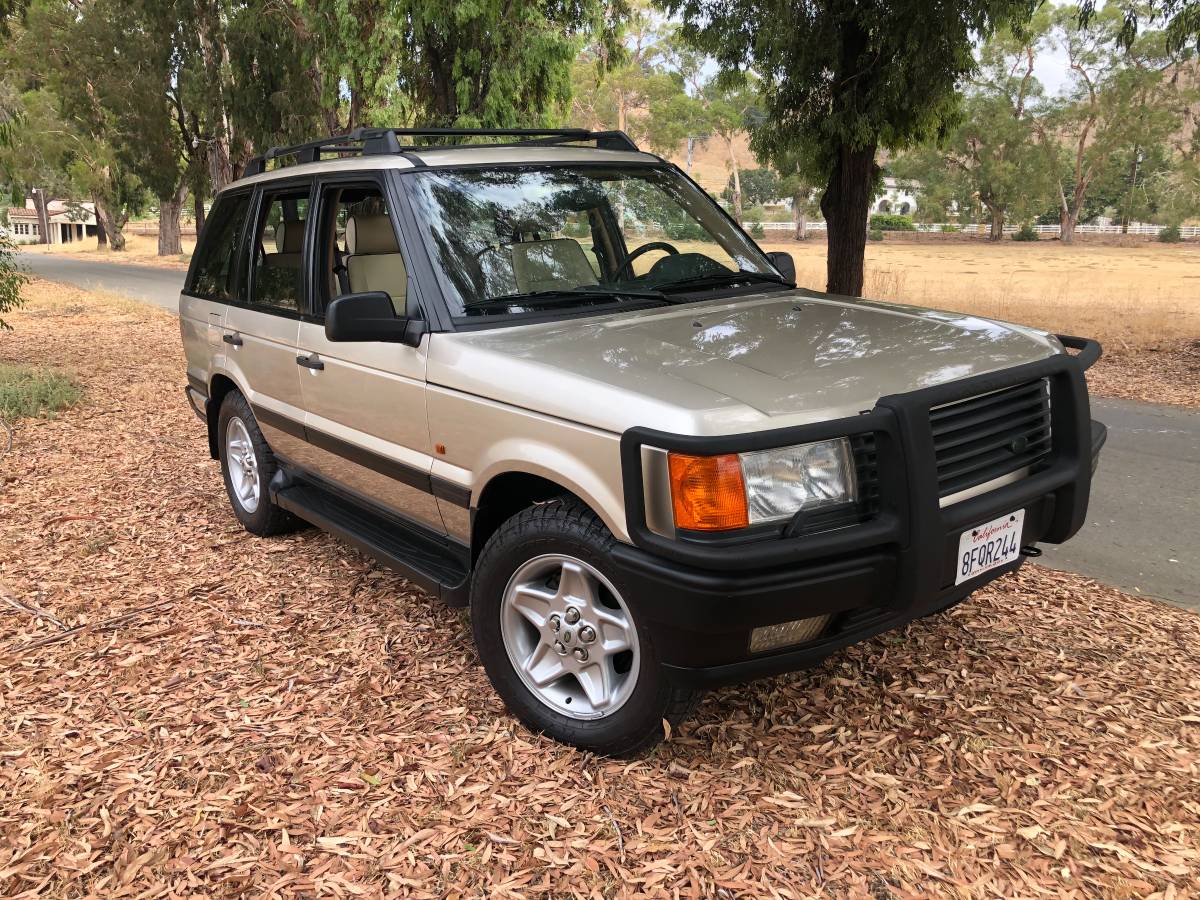 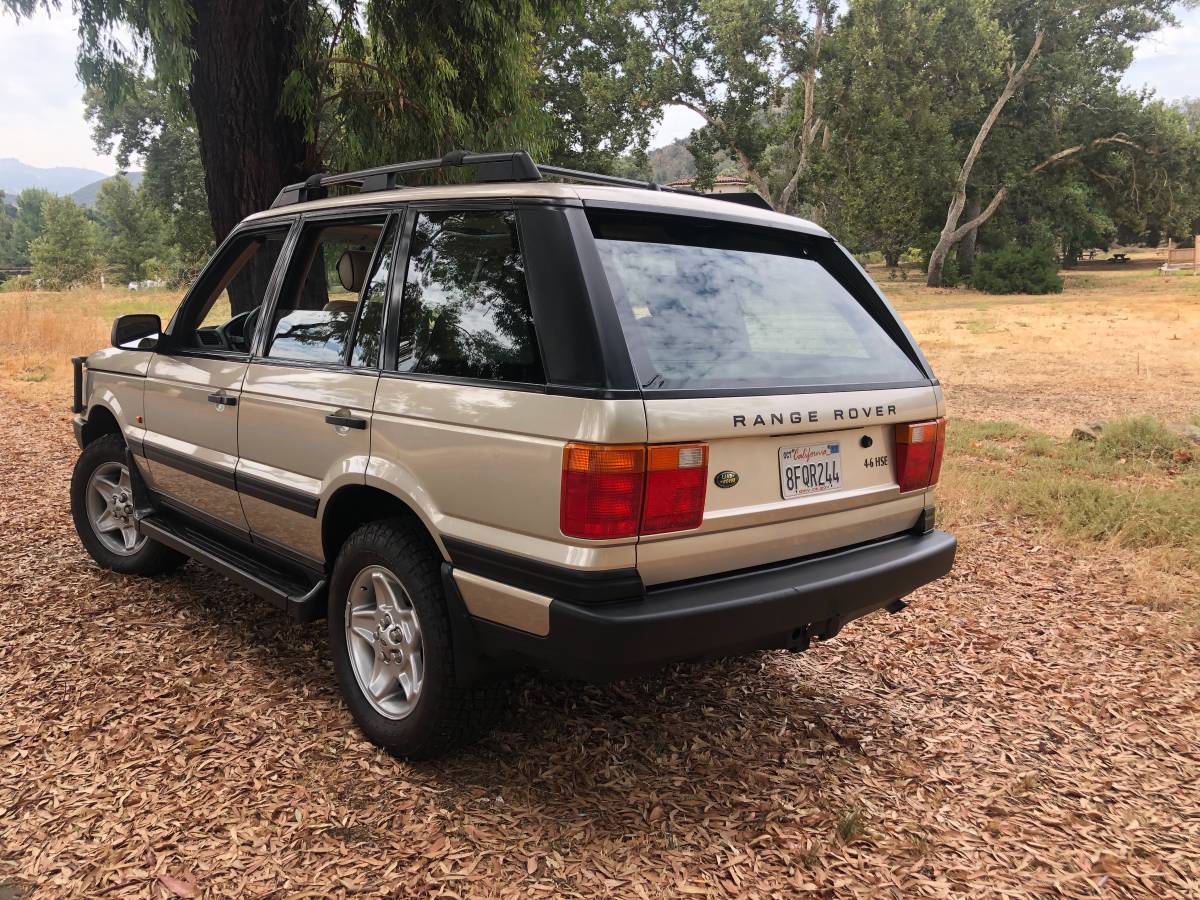 Mechanically, this P38 covers a lot of bases – rebuilt transmission, recommissioned air suspension, tuneup, air conditioning compressor, exhaust – but doesn’t mention anything about the water pump or head gaskets. You have to figure at almost 168k miles those items have been attended to. Are they coming due again? The seller also states the trucks runs well and the air suspension behaves as it should.

The exterior looks fantastic. White Gold Metallic is a good color on these, and the black trim shows great contrast. The seller mentions some dings and dents, which is odd since the ad also talks about a minor two-year refresh that included paint and body touch-ups. Oh, well. Things fall over in garages, I suppose. 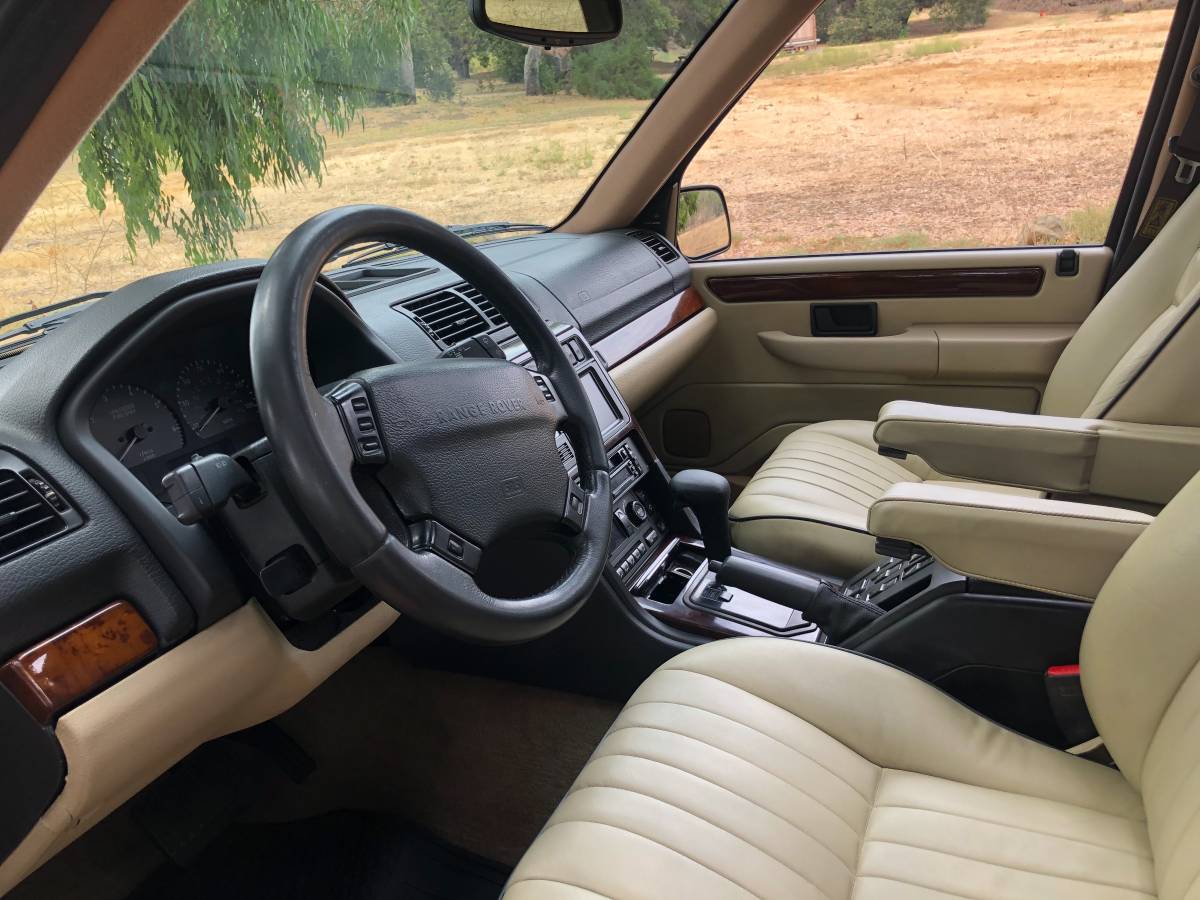 Inside the truck has new leather and refreshed wood trim – gorgeous – but the headliner is not specifically mentioned. You can make our some of it in some of the images. The HVAC control panel has some issues, too, in the form of the “book” icon and some missing pixels, though the seller states everything functions well with hot heat and cold AC.

I’ve not provided a link to the Craigslist ad since it’s actually expired. (I pulled the images and text before that happened.) Seems nobody cared about this clean Range Rover enough to pull the trigger. Perhaps keep an eye on southern California’s marketplace to see if this one again pops up. In the meantime, moving on.

Second up is a very tempting 2002 4.6 HSE in Concord, California, with 127k miles for $9,950. Bonatti Gray isn’t my favorite color, but that’s mostly because it’s gray. P38s came in great shades, so it seems a shame to default to medium black, albeit one that has some green in it.

Color aside, this P38 presents very nicely. Inside the Lightstone leather looks loved but not abused. The headliner has been replaced, and the gauge cluster shows no warning lights. You can see the HVAC control panel in one of the images, and the “book” icon is conspicuous by its absence. The wood shows a deep shine, though I’m not such a fan of the two-tone steering wheel on the later P38s. I think the (used?) face mask adds a certain something to the story.

Underneath and in the engine compartment are where I like the things this seller is saying. New head gaskets with ARP head studs. Bilstein shocks and metal springs replacing the air ride. New brakes and Continental tires. There are obviously other things to look for while you crawl around and under this rig, but at least some of the heavy lifting has been done.

The seller states this one passes California’s stringent smog test, so it probably runs pretty well. He or she also states the previous owner “really, really cared this this car” which I think absolutely comes through.

Frequently, when we write these types of articles, we get to the end and think, “Great. Got that out of my system. Not actually that stupid this week.” The arc of tracking down a nice example or two is in and of itself enough to quench the thirst. Has Reed bought a Maserati Quattroporte? Have I bought a Dodge Omni? No and no. But now that we know apparently good ones are out there, we can be done and move on.

This does not feel like one of those times. The “moving on” part is not working. The thirst is real, and present.