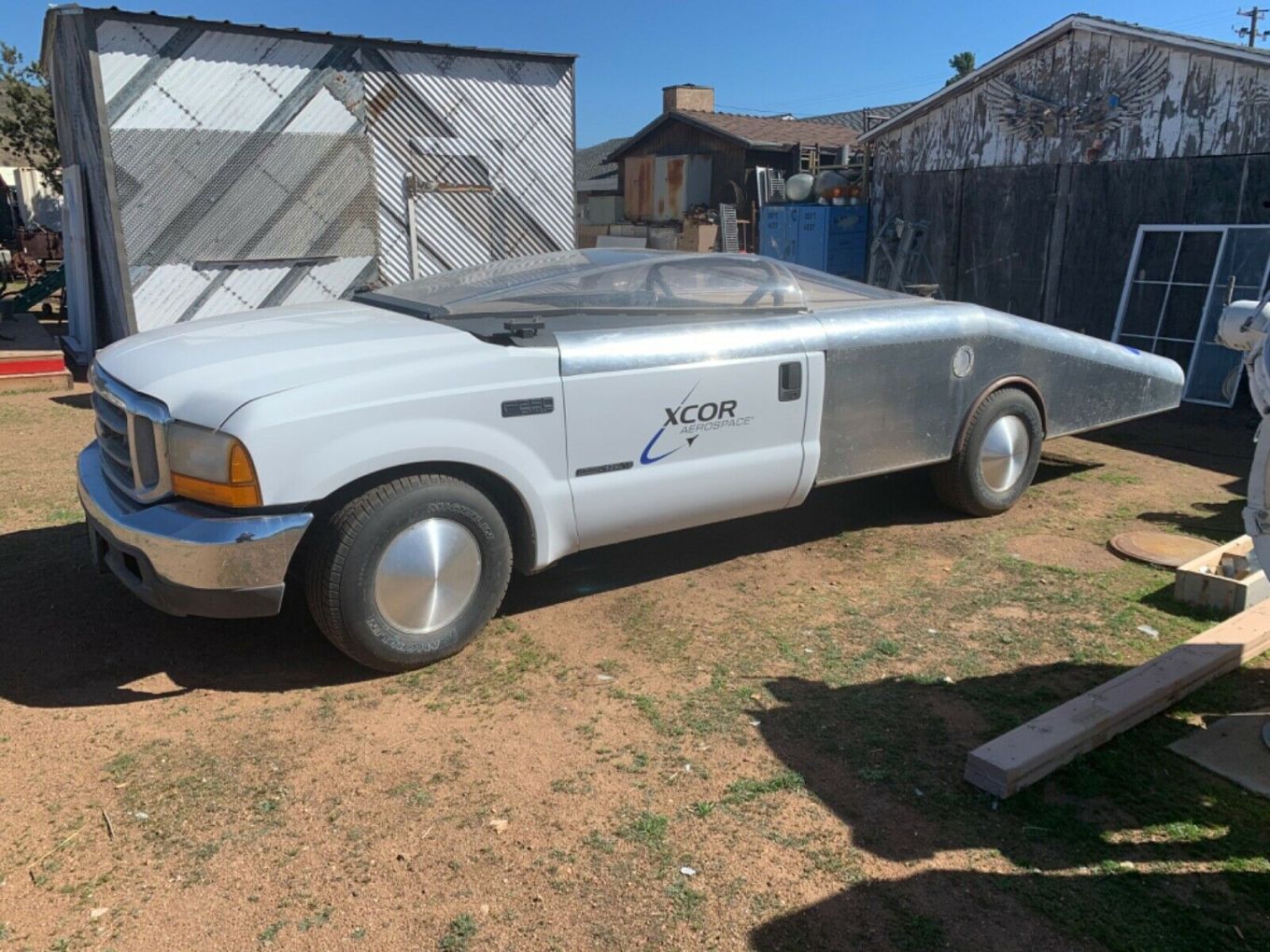 Every now and then a vehicle comes out of the woodwork that is so interesting, so different, your humble narrator feels the need to surface and poke some words into a keyboard.

These days that vehicle has to be genuinely out there. It’s not going to be a Webasto-roofed youngtimer Mercedes-Benz with a random-colored velour interior, or an engine-swapped BMW using one-off pieces milled from solid unobtanium, or another something interesting I’d consider buying but ultimately decide was just too much effort.

About that last bit: I absolutely would not buy the Ford you see here. I have no room for it, we’re hoarding cash, and while I haven’t looked at it in a while – plus the fact at least half is written in Hebrew – I’m guessing there are clauses in my marriage contract about these sorts of things.

But you, dear reader, should dip into your own cookie jar of adventure without hesitation and snap up this, the one and only Trunnel.

I can easily guess your next question: “What’s a Trunnel?”

Trunnels are defined as hard wooden pins used to attach together very large pieces of wood. Think ships and buildings, rather than sofas and bookshelves. Sometimes known as treenails, they are more commonly referred to as pegs or dowels.

And now vehicles, too. “Trunnel” is what you get when you merge a truck with a wind tunnel, as a company called XCOR Aerospace did sometime around 2015. XCOR operated for almost 20 years, mostly out of Mojave, California. One of their projects was private spaceflight, and during development they decided they needed a simple way to test a one-third-scale model of what was to become their Lynx suborbital spaceplane. 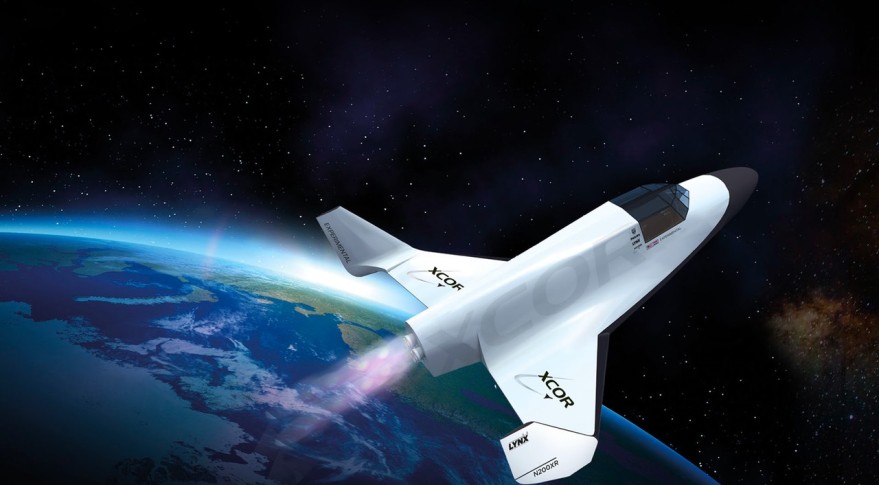 Enclosed wind tunnels of any kind are very expensive. Instead of bringing the spaceplane to the wind, XCOR sort of decided to bring the wind to the spaceplane. They figured strapping their model to the top of a vehicle and blasting down an empty runway would approximate sticking said model in a wind tube. Shouldn’t be a problem for a bunch of engineers with mad aerospace manufacturing skills, right?

Apparently not. XCOR bought a 1999 Ford F-250 Super Duty with what is likely a 7.3-liter Power Stroke turbodiesel lump under its big, white nose. They then proceeded to lop off the upper part of the cab, replacing it with a fixed plexiglass canopy. The result seen here looks like a Mini Cooper Coupe’s demented brother.

The plastic dome required lowering the dashboard – which required relocating the HVAC controls – and seating positions, which required custom race seats bolted directly to the floor. The steering wheel looks lifted from a shifter kart, and there’s a roll bar hiding in there, too. 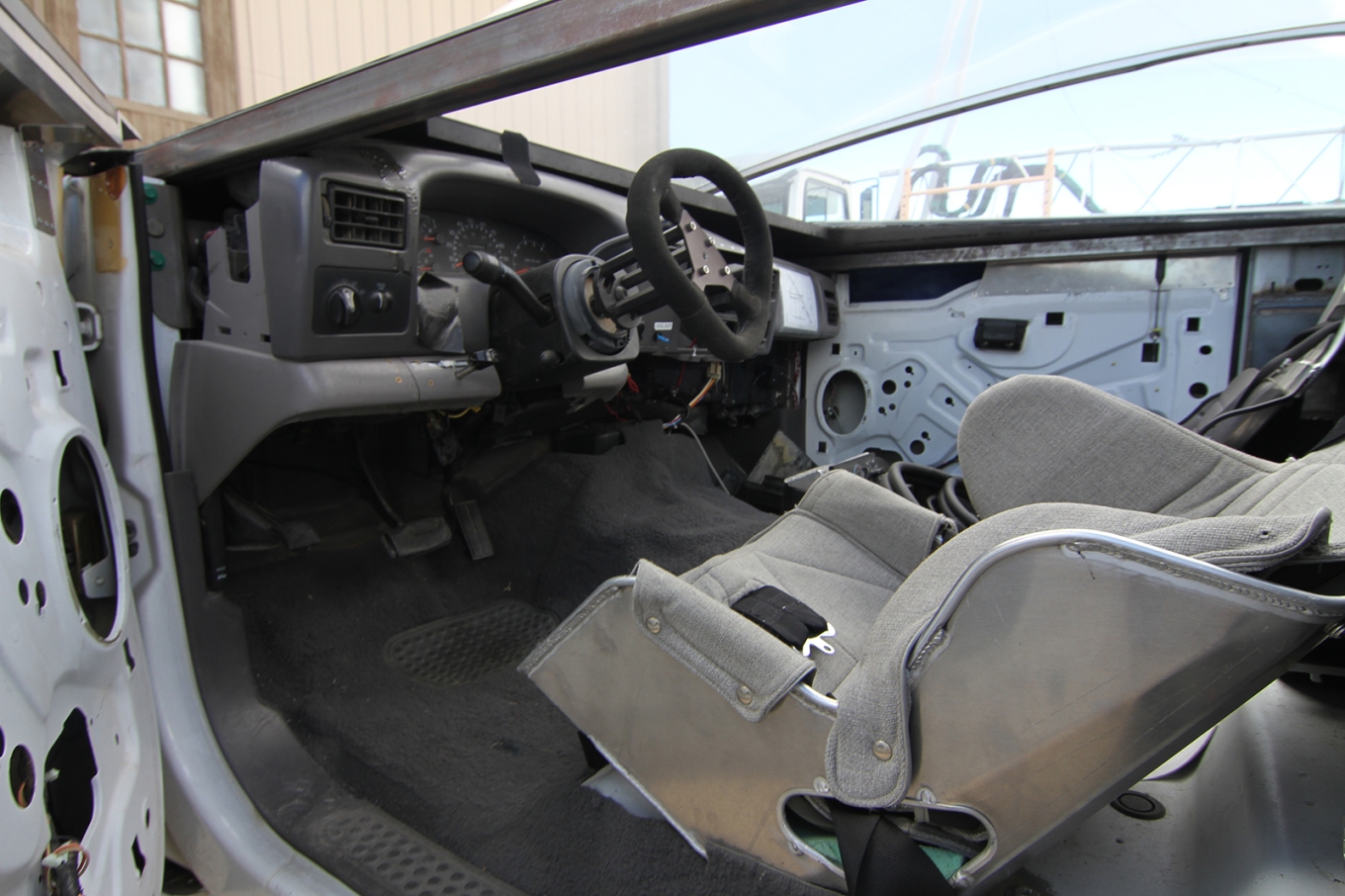 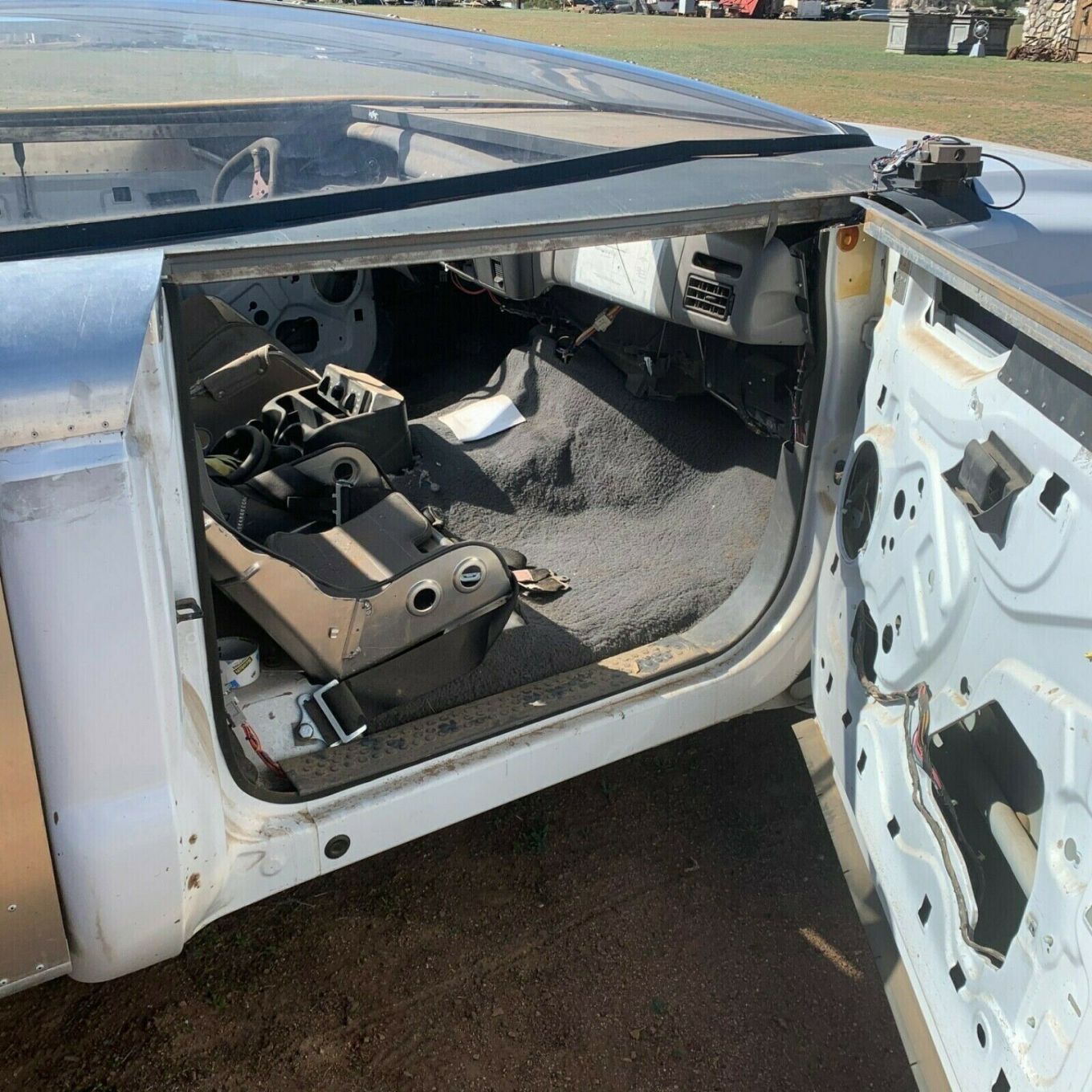 Perhaps you’re easily distracted by large, shiny objects. The Trunnel has you covered. The stock pickup bed was binned – or possibly turned into a bin – to make way for a custom aluminum fairing that adds several feet of rear overhang. Does it also provide better aerodynamics for hurtling down a runway with a small spaceplane strapped to its back? I’m not about to argue with a bunch of crafty aerospace engineers, and you probably shouldn’t, either. 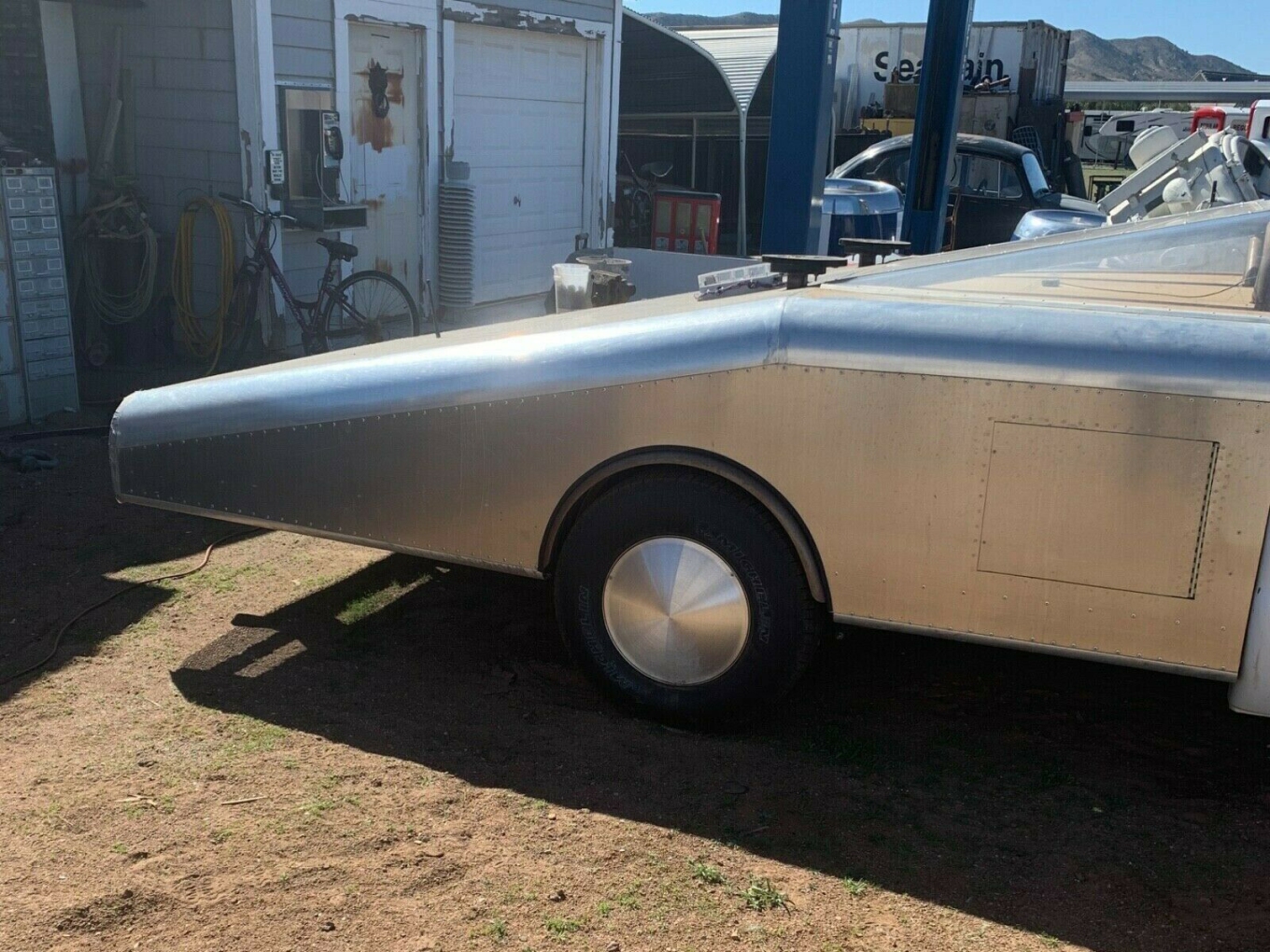 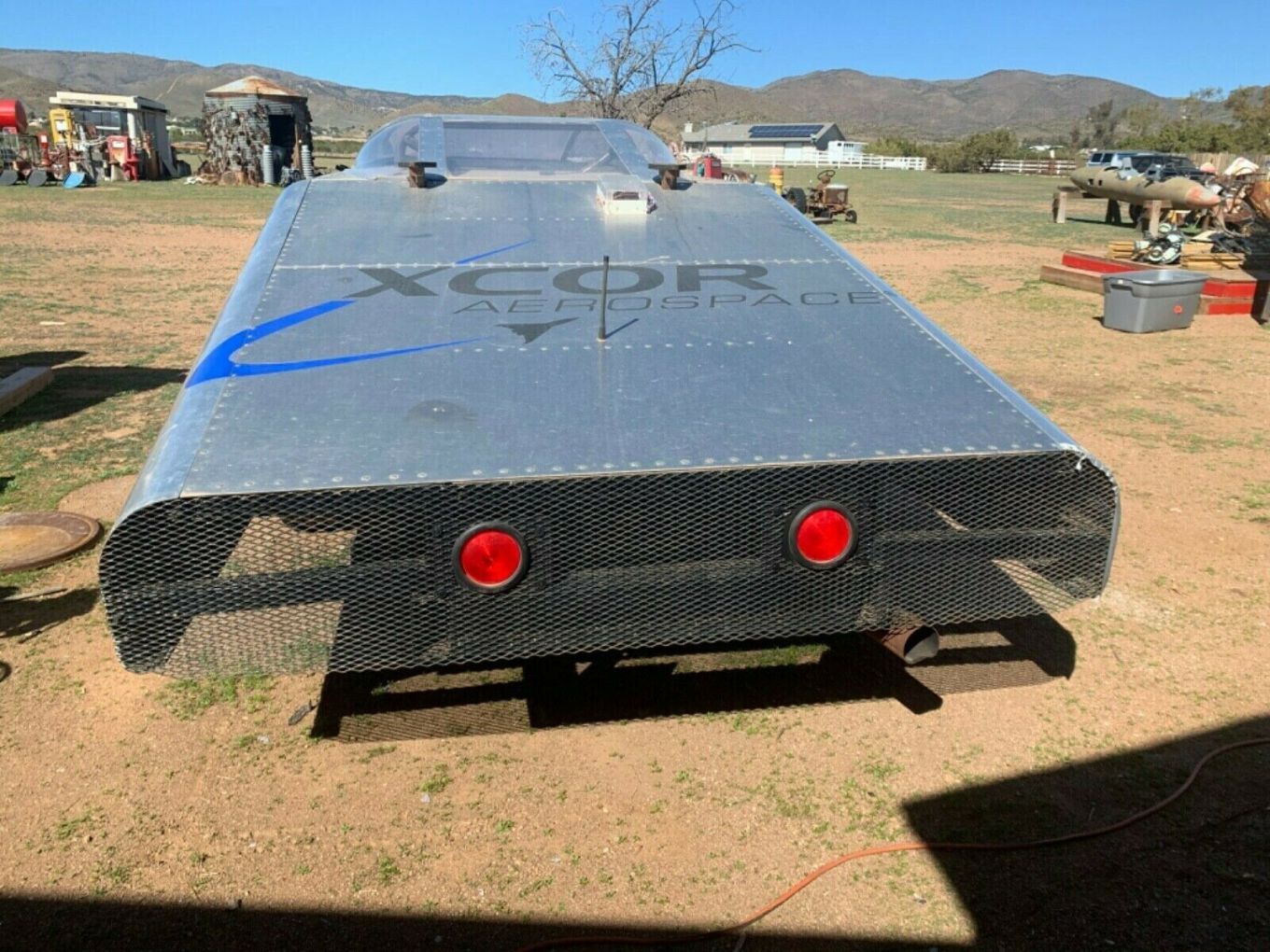 To help with the hurtling, the suspension was lowered and some voodoo was injected into the diesel’s brain box. Moon-style wheel discs add to the shiny factor, and probably the aerodynamics. According to legend, this beast and its backpack toy could have run passed the century mark on the runway, had XCOR actually gotten around to bolting the Lynx to the roof. But they didn’t. 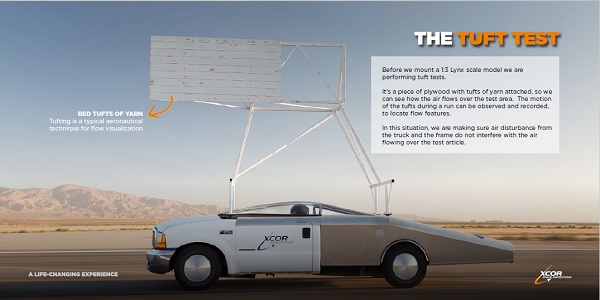 At this point I feel like some disclosure is necessary. I know the seller well – he’s a colleague and a friend – and actually encouraged him to buy the Trunnel a month or so ago (because he and I are bad for each other that way). Believe it or don’t, there wasn’t alcohol involved in this purchase. Because why wouldn’t you buy an ex-spaceplane support vehicle in California and drive it back to Minnesota?

Sadly, the situation has changed. Due to, well, life in the forms of our families and jobs – not to mention this pesky pandemic – he and I can’t go out to Acton, California, don our awesome red Devo hats, and drive it back under cover of darkness at impossible speeds, maybe with a preposterously large model rocket riding above us. Where the Trunnel now sits in the pictures is where my friend purchased it at the end of March. The previous seller is being a stand-up guy about storing it until the end of the current auction.

What does one actually do with a Trunnel if one isn’t performing aerodynamic tests? That is, other than drive it around while looking completely awesome? It’s not a great Home Depot rig, but you’d have the only one at Cars and Coffee. Even with its lowered suspension, it probably isn’t a backroads carver. But the extra shove hiding in the Power Stroke – and plenty more on tap with a medium-sized cash infusion – means you might be content with tormenting other drivers at stop lights, or on the highway.

I’m not sure, but it will be up to the next owner to find out. And, please, do report back here if you are that next owner.

4 thoughts on “The XCOR Aerospace Trunnel” Leave a comment ›

Totally That Stupid – Car Geekdom, and a little bit of life. The XCOR Aerospace Trunnel