I can’t really tell you why I love Aston Martin’s folded-paper land wedge. Maybe it goes back to a Road & Track magazine cover, either a regular monthly issue or one of their Exotic Car specials. Those issues appeared at a time when I was more interested in pictures than words, and I can tell you the pictures by themselves made no sense of this alien craft.

Maybe I saw one at Miller Motorcars in Greenwich, Connecticut back when they were sort of new, or at the New York Auto Show. Couldn’t tell you. All these years later, however, the Lagonda is just as cool and weird and interesting to me. Just maybe not for the same reasons.

It’s no secret we love silly sedans here at TTS. Anything is fair game from a Mercedes-Benz 500E to a Pontiac 6000STE, from a Maserati Quattroporte to a late Mercury Marauder. So it’s probably no wonder we’d eventually come around to the Lagonda. Indeed, they’ve been getting some press lately, what with the stunning new Lagonda being dropped into wealthy Middle-Eastern markets and (maybe) Europe.

Production of this “series” of Lagondas actually started with the Series 1 (1974-75), which where an odd four-door version of the brutishly gorgeous V8 coupe. They sold 7.

The Series 2 – the wedge – debuted in 1976 but didn’t make production until 1979. Lagondas didn’t find their way to the States until 1982. Series 3 and 4 followed and all told, they made 645 wedgies. Regardless of where you find one, the youngest examples are now 25 years old and eligible for importation.

Production limitations likely stemmed from the fact it took somewhere in the neighborhood of 2,200 hours to create each Lagonda. From scratch, by hand, using tools commonly found in caves and Swiss watch ateliers. Further, the intro price was almost 50,000 British Pounds, or around $106,000 in 1979 cash. That’s over $306k today, which is batshit-crazy money for a car that never really worked right.

Quick and stately progress came from a four-cam, 5.3-liter V8 making 280 horsepower with carbs and then 305 horsepower with fuel injection, all funneled to a Chrysler-sourced 3-speed Torqueflite autotragic. Manual option? Aston probably would have built you one. Given the hand-built, almost custom nature of each car, I’m sure the cobblers in Newport Pagnell could have come up with something assuming you showed up with an additional briefcase full of money.

The Lagonda interior is everything you’d expect from an English coachbuilder, only more so. Wood, leather, and positively crackpot ergonomics. The dressing on this disaster salad is, of course, the bizarro dashboard electronics which over the years included buttons, touchpads, LEDs, CRTs (think 1980s kitchen television), and vacuum fluorescent displays (think every goofy 1980s digital dashboard). And it has a rear moonroof, because of course it does.

All told, these are big and heavy touring cars that were catastrophically expensive then, and apocalyptically so now. Which of course means I think having one around would be just outstanding. So I looked around a bit to see what was out there in reasonable shape for not galactic money.

Sadly, like pretty much every interesting old and older car, prices are on the rise. The absolute best examples have never been particularly cheap, but decent examples were still in the $20,000 range. No more. Minimum ante for a good – or at least reasonable – Lagonda is now north of $30k, and the costs rise sharply from there. Is anyone really paying those prices? Unknown, as this is an immensely complicated niche model with paralyzing style from what was at the time a cottage manufacturer. 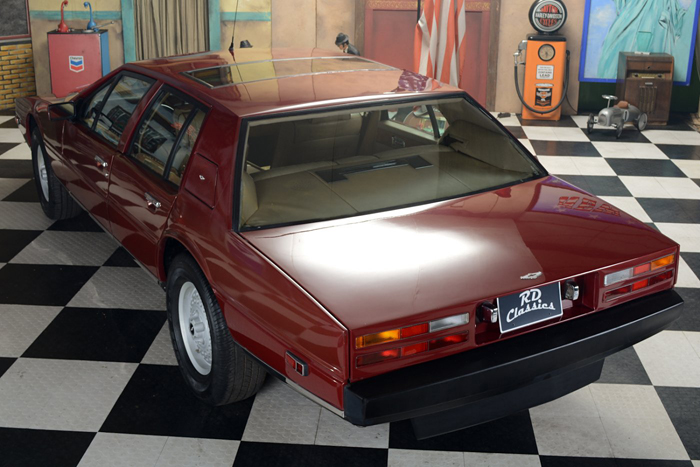 This Bordeaux 1984 Lagonda, originally a United States (likely California) resident, currently slumbers in Germany at a used showroom. Information in the ad is thin – everything seems to be “good” and with some patina – but we can glean more from the pictures. 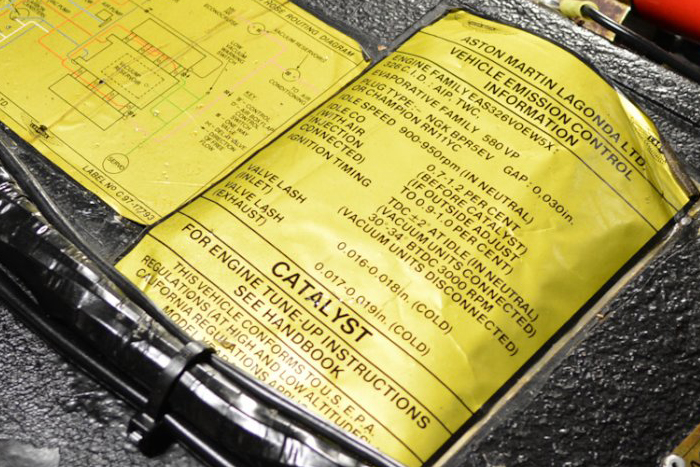 At first glance it’s gorgeous. The paint shines beautifully and none of the exterior trim seem to be immediately falling off. The rims – original Aston pieces – look fantastic, certainly better than the disc wheels these cars sometimes wear. Under the hood presents nicely and clean, but not overly so. Oddly, it has lost it stock air box but retains its US/California emissions control equipment. The aircon must work by magic, since the belt is missing. 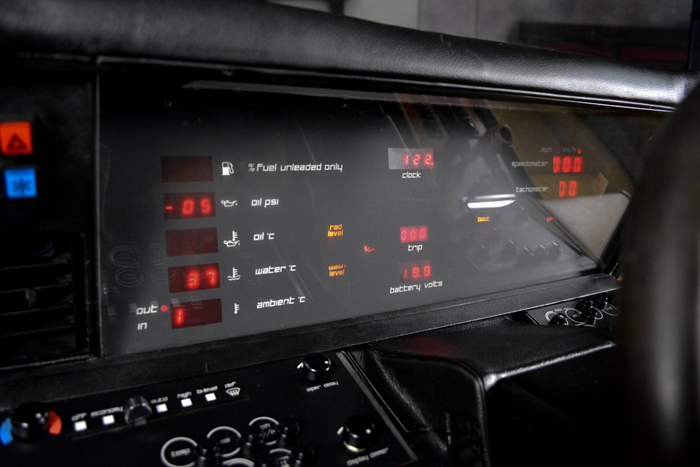 The interior is a letdown. Sure, it’s awash in dead trees and leather cow, and the seller even shows the instrument cluster working. But the hides and carpets are filthy, and the wood is chipping and cracked. I expect the dashboard leather (?) on the binnacle to be unraveling a little bit, but this looks pretty wrinkly.

There is no mention of service or history, or how much of the car doesn’t work. I’m thinking either the market is a little thin in Germany or the car is worse off than advertised, since the price has been cut roughly US$3800. So for just around US$40,000, you could have this Lagonda delivered to your East Coast port of choice.

I’m not morally opposed to engine swap cars, even expensive exotics, depending on the components and the base. In fact, if you had a Lagonda with a dead or missing powerplant, maybe dropping in some good old American lump isn’t the worst idea. Or a BMW V12. However, I would have probably not opted for a Ford 4.6-liter SOHC motor most commonly found in pickups and Lincoln Town Cars. I don’t want my 1981 Lagonda to sound like a bro-truck.

The body in black looks laser straight, and fantastic. In this color, those aforementioned disc wheels completely work. The seller claims no rust above or below, and boasts of low miles and original Avon tires, the latter of which is a genuinely spooky prospect. 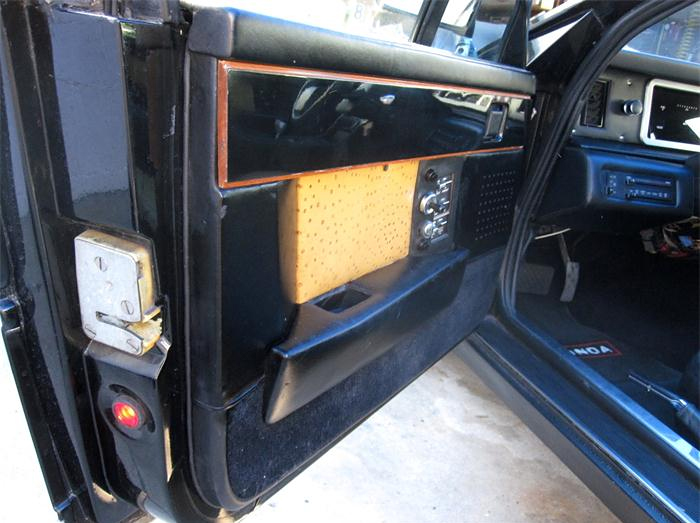 The interior is a horror show. Ostrich? Seriously, who does that? Why be a skinflint instead of going full Baby Seal, you cheap bastard? The wood has been refinished in (replaced with?) piano black. The gauges are custom, because either the originals didn’t work with the new engine computer or just didn’t work at all. The climate control head unit has been replaced with… something General Motors, maybe. So have the window switches and other controls on the driver’s door. Pretty sure the headlight switch is from a Dodge Caravan. The shifter is either an early-style – appropriate for 1981 – or from a right-hand drive car, or both.

The car is listed in Los Angeles, but the license plates still show Arizona. I’m guessing the current owner took the car for a smog test and the shop rolled their collective eyes and said, “Yeah. Right.”

This one is a little too much “artist’s interpretation” of a Lagonda. Yes, the exterior style is there, but no effort was made on the interior. Or, rather, no good effort. There was plenty of effort in reworking everything, I’m sure. And while I get the Ford connection with that motor, I’m not buying it at $32,500. Literally and figuratively.

This 1986 Lagonda in Merlot – which is apparently different from Bordeaux (duh) – clicks a lot of my radio buttons, while fondling my touchscreen lightly. It has good colors, appears to be in fantastic shape, and is being sold by an actual Aston Martin dealer for a bottle of Balvenie under an otherwise reasonable $40,000. 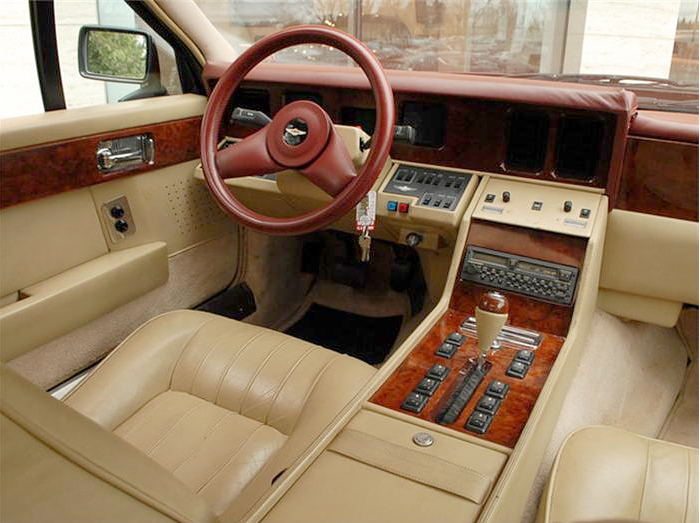 It comes with receipts for a bunch of work – from almost two years ago – which while not covering absolutely everything makes me think someone has at least looked it over. Two owners and about 18,000 miles from new, based on the license plates it lived in Florida and now is camping out in Washington state. It has its books and service guide, and a clean Carfax (for whatever that’s worth).

I’d like more pictures, but if I were serious about buying this Lagonda I would take a little trip to visit. Based on what I can see, the driver’s seat backrest is a little saggy and the dashboard binnacle is a little wrinkly. Still, not bad, and given the recent market for goofy cars, probably on point pricewise.

All it needs now is a set of winter tires. Something in a Light Truck should do.