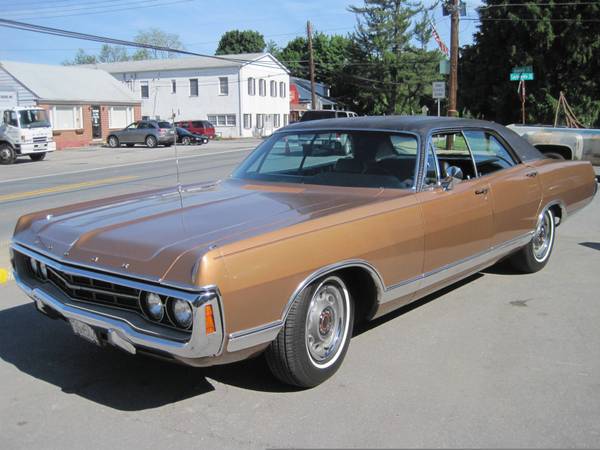 Cars like this Dodge Monaco are the reason that Americans were able to function for so long without minivans, SUVs, crossovers, MPVs, and, well, you get the picture. You see, cars used to be big. And not just Cadillacs and Lincolns, but regular cars, too. The average American family with 2.5 kids and a dog could easily fit in a classic four door like this, and still have room for Grandma – and that’s if they bothered to wear their seatbelts. Heck, without seatbelts you could get another 2-3 folks in the car comfortably! Sadly those days are gone in the name of efficiency and safety (?), but you can relive them for the scant $5,500 that this car available on Craigslist in Laytonsville, Maryland would cost you.

I actually have a soft spot for Dodge Monacos. When I first started dating my wife, her family had a 1974 Monaco named “Big Rosie” which was purchased solely for the purpose of hauling around a camper. Theirs was a two-door (two VERY LONG doors) and a generation newer than the example we see here, but the concept was the same. I think it was the same color as this one, or it may have been a shade greener. Theirs was basically the coupe version of the Blues Brothers car, and that made it cool in my book. I recall one time I borrowed it for a bachelor party where seven of us piled-in, put “Low Rider” on a loop in the 1980s-vintage cassette player, lit our stogies, and cruised all of Central Connecticut’s finer gentlemen’s establishments. Maybe you had to be there.

The appeal of this particular car, first and foremost, is obviously the condition. The seller reports to have bought it from the original owners in 2009, and spent a fair amount of time and money bringing it up to snuff – but seemingly mostly on mechanical and driveability issues – not surprising for a 43 year-old car with just 39,000 original miles. The other thing that I really like about it is that it is a four-door hardtop. For you younger folks out there, that means that there is no pillar between the front and rear doors and no immobile frames around the windows so that when you put the windows down you just have a huge, wide-open expanse of fresh air. I’ve always been a sucker for a hardtop – and this one is no exception.

I like the rest of this car’s specification, too: air conditioning is a must in these parts, and frankly in this century for all but the most hardcore of sports cars. The car, or at least the driver, probably couldn’t function without power brakes or power steering given the car’s size and weight. But it also has manual windows, which for me represent all of the cars of my youth, and are something we largely take for granted today. The down side is that to maximize the hardtop experience you have to physically get out of the car and walk around to each door to open the windows, and do the same again to close it all up – a real hassle in a surprise rainstorm. The plus side, however, is no finicky electric window motors to break. And folks, this was 1970s American car manufacturing: they would break. Then there is the fabulous optional “gator grain” roof. Outstanding. Finally, it doesn’t hurt that the original window sticker conveys, either. That’ll come in handy, well, never, but it’s a cool conversation piece.

The venerable Chrysler 383 2-barrel motor was good for a competent 290hp, although the 4-barrel option back then added 40hp. I’d be looking for the bigger carb. There was a 375hp 440 Magnum option for sedans prior to 1970, but for that model year the lower HP plain-Jane 350hp 440 was the only monster motor available but hard to come by these days in any condition. The seller has addressed the carb, the brakes, water pump, and all the rubber on the car in order to make it a useable driver, although it would be a shame to pile the miles on this beauty. It’s a show winner, and were I the lucky third owner I’d be looking for any chance I could find to loan it out for use in period movies or offbeat wedding rentals. You won’t win a lot of drag races in one of these, but you can have all kinds of fun without really trying. It’s an attention-getter in the modern world, and with the right muffler package could make all kinds of fun noise. Me, I’d probably use it like I used my father-in-law’s old Monaco – to cruise with the boys, playing “Low Rider” as loud as it will play, smoke a stogie and enjoy the ride.