So it wasn’t just happenstance that I recently started looking at Boxsters. In truth, besides wanting to buy a convertible in the cold months and sell it on when the weather turns warm, I have also been in the process of planning a trip to Los Angeles with my good friend and editor of the UK’s Pistonheads website, Dan Trent. There were (and still are) a lot of question marks around what we would do when we were out here, but we knew two things: first, the good people at Porsche kindly agreed to loan us a 2014 911 Carrera S for the duration of the trip, and second, we were going to explore the local Porsche culture that is really second to none anywhere in the world – including Germany.

First things first: I need a new 911. I mean, we all do, right? The 2014 911 Carrera S with 7-speed manual gearbox is, in my mind, the ultimate modern sports car. Sure, you can have your Ferraris, Lambos, Maseratis, or whatever, but nothing drives like a 911. The shifter is like an extension of your soul, the rear-mounted flat-6 motor sings a song of glory every time you apply pressure to the go pedal, and the steering is, well, pretty darned near perfect. If anything, it’s too easy to drive. Following an early-1970s 911RS replica through one of the LA region’s numerous winding canyon roads was relaxing, while the RS driver was no doubt working for the prize. Still, this is a car you could drive every day and it’s as easy to drive around town as it is through the twisties. The down side is that this car costs more than a small house in much of America: and certainly more than I have burning a hole in my pocket at present.

After some shooting of our 911 that almost had us swimming in one of L.A.’s famed aqueducts, we headed-over to Magnus Walker’s Urban Outlaw garage, where we found ourselves crashing what was probably meant to be a private tour for senior Porsche brass – but whatever. We had an appointment. If you haven’t seen one of Magnus’s 911-oriented videos online, it’s definitely worth taking a look. He’s larger than life, but at the heart of things is a guy who loves his cars, who knows how to make them drive the way he wants them to drive, and who – through the magic of the internet – has made quite a name for himself in Porsche circles.

All-in, Magnus’s collection includes a variety of 911s in varying condition, but none newer than 1977. Most recently, he has taken to focusing on the 930 Turbo models, counting among his finds (which he reports always seem to find him!) the first official U.S. production 930 – a silver on tan can first delivered to Brumos Porsche and likely having celebrity provenance. Let’s just say Sundance may have had a steed of a different breed… But I digress. What really comes through as Magnus guides the tour through his garage, his parts stash, and even his chop shop where he parts out cars that aren’t worth saving, is that he is a 911 guy through and through. He does admit to some interesting other cars in his past however, including two Mopar Super Bees, a Shelby 350 Mustang, a Jag E-type, and even a Ferrari 308. Still, he always comes back to 911s, and his passion is paying off. One of Magnus’s cars recently sold at auction for about $300K. Not bad for a guy from Sheffield, England.

From Magnus’s we head to see Jonathan Sieger at The Car Brewery. Like Magnus, Jonathan knows his 911s inside and out. Also like Magnus, Jonathan prefers early 911s due to their simplicity. However, unlike Magnus who decidedly creates cars for his own pleasure, Jonathan has a very successful business fixing-up and selling clean 911s back to das Vaterland. Among Jonathan’s current projects with his partner Tony is an epic racecar which, while not the original car raced by its creators in 1968, was built by the original creators of the orange number 7 car that surprised many a racing team with much deeper pockets than they had. The car is spectacular in its implementation, and also for the sheer noise it emits. Funny: the more you talk to these guys, the more their passion seems contagious. 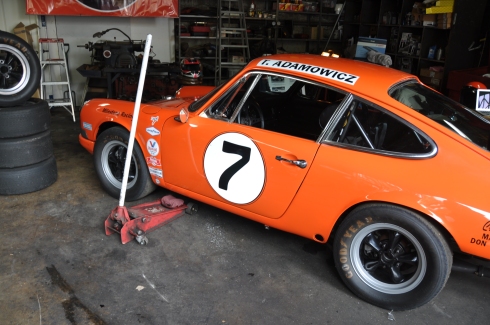 Final stop of the day was TRE Motorsports, where a group of enthusiast owners gathered to meet is to talk Porsches and, as time may allow, take a tour of some fun nearby roads off the beaten path. TRE owner David Bouzaglou showed us around his impressive operation littered with equally impressive Porsches of all generations, and shared with us some of the stories behind the cars and their owners. There was a very original black on black 911 with loose connections to Steve McQueen, a pristine grey on check cloth 911 that, while it looked stock on the outside, contained extensive modifications to the drivetrain including rebuilt and customized 915 gearbox, Boxster brake kits, and a twin-spark motor that far exceeds what Ferry Porsche had in mind when the car was a new 911T back in the day. 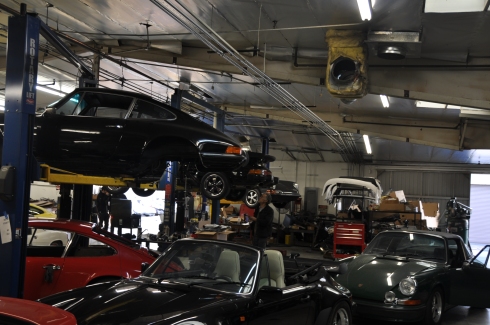 And it was from there that our caravan consisting of the early grey car, a green 911 RS replica, a yellow 991, and our press car headed up into the hills to be driven as God and the engineers intended. And despite some sane on the road and a little rain, the cars all ate the roads up with voracious appetites. Which leads me back to the beginning. I need a 911, but I’m not in a place to buy one. David from TRE and I spent some good time talking Boxsters, and I think I am more convinced than ever that a Boxster would make a nice interim stopgap car while I save my pennies for the prize. And now back to the classifieds.