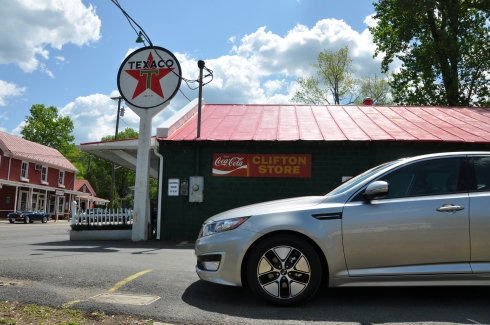 Mark my words: the Koreans are coming. Folks who have been reading TTS for a while may recall that last fall I dipped my foot in the Kia Optima Hybrid, and at the time emerged mostly impressed but unconvinced largely thanks to the demo car’s really spooky steering. At the time I concluded that I was better-off just holding onto the Accord Hybrid for my solo HOV-lane commute for the time being until something else caught my fancy. But I kept coming back to the Kia. Yes, seriously. Meet TTS’s first *new* long-term test car: a Satin Metal premium package 2012 Kia Optima Hybrid. 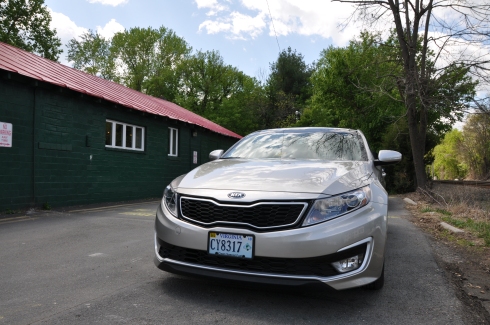 I think the basic reason for my attraction to the Optima was just that: it’s attractive. Former Audi design chief Peter Schrayer took what was possibly the most generic car brand in the industry and sprinkled it with style. To my eye, the car’s exterior is a combination of European and Asian styling: a little bit Jaguar, a little bit Audi, a little bit Saab, and a little bit Lexuhondacurazdoyota. You know what I mean. Inside, the somber cabin has a very Teutonic ambiance, and smell. I love the smell of leather and plastic and, well, formaldehyde. The layout is clean and very functional. If I have any complaints about it, it would be the stacked switches for the heated seats and the front-and-center location of the iPod hookup. I do, however, like the swath of neutral-colored cloth on the otherwise black leather seats. 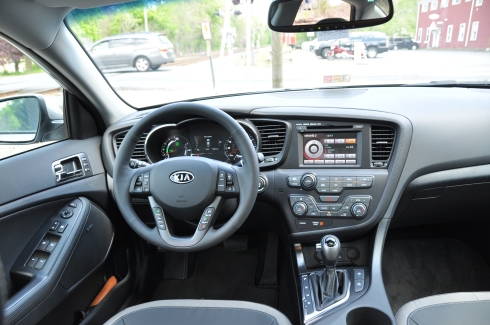 So what, you ask, changed after that initial test drive last fall? Well, most importantly Kia identified the steering problem. Apparently there was a glitch that was causing this problem that made the car feel like steering inputs were delayed. That is no more, and the electric power-steering now feels far more responsive to driver inputs, and effectively conveys what is happening on the road surface. My other chief original complaint with the Optima was some interior plastic that looked like the finish would wear-off in a matter of months if not weeks. I’m not sure if they upgraded across the range, but in place of the painted plastic inside my Optima is nicely stitched leather or faux-leather that looks pretty darned good. 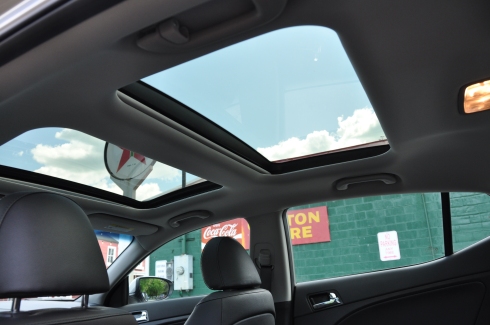 “That’s all fine, but it’s still a Kia. How much are they paying you to say nice things about it?”

Not one red cent. In fact, I’m paying them. Every month. About ten grand less than I’d be paying Toyota for the pleasure (??) of a comparable Camry Hybrid. For me, it came down to several things. The Honda is getting old for a hybrid. At six years old, the technology is already 2-3 generations removed from what’s available now and it feels it: the Honda’s system is harsh and intrusive while the Kia’s system is butter-smooth in comparison, and who know’s when I’ll get the pleasure of spending upwards of two grand on new batteries..? They say the Toyotas are even better, but then you have to drive a Toyota. As a daily driver, and being one of millions of Americans addicted to my email and mobile phone, I got tired of fighting with the Bluetooth earpiece I had to use in the Honda because the car didn’t have an integrated solution. 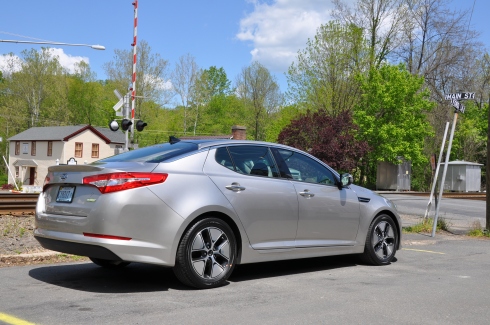 I’ll also admit that as much I have railed against them, I really actually like integrated navigation systems. But possibly the biggest selling point for me was the Mercedes-esque panoramic sunroof (not my kids, though. They are all about the back seat bunwarmers!!). I’ve been secretly trolling the classifieds for the right Mercedes W211 with pano roof – maybe a nice ’07-09 E550 – and even thought up all sorts of rationalizations for giving-up on my time-saving carpool lane exemption. In the end, I may not have 5.5 liters of 300+ horsepower, but I’ve got another approximately 1.5 hours to use as I see fit every day. I also have a car ripe with real, bona-fide modern features and amenities all wrapped neatly in a package that, if not for the badge, looks like it belongs on just about any German brand’s dealer forecourt. I also get over 500 miles on a tank of gas. I might, however, be singing a different song if my wife didn’t let me have my toys, too… We’re committed to this car for some time to come, so stay tuned to see if the Koreans have truly made the leap or if it’s just another false alarm.