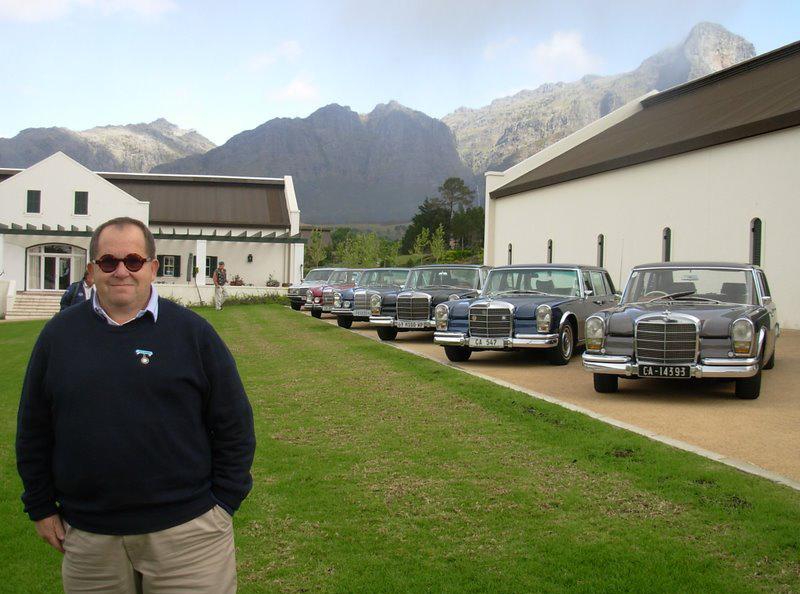 The classic Mercedes-Benz community, and I personally, lost a great friend today – Stu Hammel of Reading, Pennsylvania, born September 20, 1948, and died today, January 4, 2012 after losing a relatively short battle with cancer. He was just 63 years old. But Stu’s passing is not the focus of this article. Rather, his life is the focus, and the friendships we build through our passion for things automotive.

I first met Stu Hammel when he invited me as the U.S. correspondent to Mercedes Enthusiast magazine to the 2003 Lode Fest – the annual meeting of the International M-100 Group for which he served as president for more years than he cared to remember, only stepping down just a few months ago when his sickness started ramping up. I arrived at the meet – at Karl Middelhauve’s old place in Woxall, PA – not knowing what to expect but anticipating an uppity group of elitist car snobs. After all the M-100s were cars for the rich and powerful, bought new by dictators, Hollywood actors, pop stars, and kings.

I drove up in a Honda Accord station wagon, intentionally parking away from the crowd, and walked onto the property where I was met by a semi-round fellow with a welcoming smile behind a table. He wore a nametag identifying him as Stu Hammel, the only person in the group whose name I knew due to his invitation and a brief telephone conversation we’d had where I told him I’d be there. I was immediately relieved by how welcoming he was, and he signed me in and gave me a nametag, then he told me about a few cars on the field I might be particularly interested in, so I set out on my journalistic quest.

After a long day of tech sessions and general car talk, the group held a dinner at a nearby German restaurant. It was a buffet-style feast, and it was beyond fantastic. Knowing Stu now, I realize I should have expected no less. Food was one of the many passions we shared. Anyway, Stu invited me to sit with him over dinner, and we talked about the group and the cars. I shared my preconceptions, and he confirmed that there were a few of those folks in the group, but the vast majority were “just regular guys who have to take out a second mortgage when our cars break.” And it was true. I would later learn that Stu was a regular guy like me who lived in an average middle-class neighborhood like me and really liked his cars – like me.

Actually, Stu was anything but a regular guy, but he lived a regular lifestyle. In fact, although he was working in the insurance industry when I met him, he had previously been an olympic-level swim coach, college professor and debate team coach. He was quick with a joke, and could tear someone up one side and down the other with a quick wit and sarcasm that some folks never really comprehended. He had a low tolerance for idiocy, but a high threshold for inquisitiveness. One of Stu’s friends pointed out to me the other day – the last time I saw him – that he really seemed to love teaching people, being a mentor, counsellor, and really a friend. He was all of those for me.

After that M-100 group meet, Stu and I collaborated with a couple of other M-100 geeks on a Buyer’s Guide article for the Mercedes 600 which required that he and I talk a lot by phone, and we met up in person to share notes and other information. During that time, I learned that Stu’s passion for cars went way beyond Mercedes, although they held a special place in his heart. He liked cars that were comfortable (“cosset my large posterior”), unusual, stately, or had some other unique quality that appealed to his sense of style. He chastised me every time I paid too much for a car or bought something silly on a whim.

At the same time, I learned all of my best car buying techniques from Stu. He taught me how to write a really good eBay ad – the basic text of which I still use today – along with how to read awful eBay ads to identify potential money makers. Like me, a lot of the car hobby for Stu was about the chase of the car, and then subsequently selling at (hopefully) a profit. When Stu retired, he made his car hobby into a living not only flipping inexpensive cars but also brokering the sale of some truly extraordinary vehicles, among them a 29,000 mile Mercedes 6.3 and a 5,000 mile Mercedes 600. Stu knew his cars, and his Mercedes M-100s especially.

Stu and I would share web links to potential cars ad nauseum. In fact, I realize now how fortunate I was to have someone to do that with as frequently as we did. Often the response to these things would be a curt “pass” or “waste of money”, but others the phone would light up with Stu’s phone number seemingly within seconds of my clicking the “send” button which meant I was either onto something good or I was in for a right downdressing for being such an idiot as to even consider such a piece of crap. I actually saw something yesterday that piqued my interest and got as far as copying the link before I remembered that he wasn’t going to be on the other end to receive it. I may still go look at it tonight. Or I may post about it here. Or both.

Stu turned me on to Techno Classica Essen, and the horrible Etap Hotel in Essen which is actually a real bargain despite the freaky modular bathroom with no toilet seats. “Stop complaining,” he said, “just shut up and enjoy the free breakfast!” And he was right. I had a bed and a meal, and besides I got to see the most impressive classic car show I’d ever seen. Jonathan, my co-conspirator here at TTS, and I had one of the best German meals I’ve ever eaten with Stu at a hotel in downtown Essen during the show in 2008. “Schnitzel like a mofo” as Jonathan would call it.

I could go on forever about how Stu made the trip all the way to my home in Northern Virginia just so he could take me to the newly opened “Tejas de Brasil” for which he’d been offering regular updates on the status of their opening, and where we gorged ourselves on the endless supply of meat. I could talk about all of the little things Stu always seemed to know about Mercedes. I could always call him for a shadetree diagnosis on some ailment – most recently just a month or so ago when the 300CE Cabrio which was actually his car 2 owners ago – decided to crank and not start. I could tell you about all of the countries Stu visited once he retired just because he was interested. Since his wife still worked, Stu traveled as far as China and South Africa on his own, and seemed to cherish every minute.

Even on his deathbed Stu was still talking cars. He asked me to help with the disposal of some of his cars after his passing, among them a beautiful but high mileage Bentley and a Citroen. When Stu’s wife said she might want to keep them because he loved them so much, he looked at her and said “oh, don’t be silly”. I actually told her she should keep the Bentley if she wants to, but to start it regularly and drive it once in a while. The Citroen, on the other hand..

But now I’m just rambling. The point to all of this is not only to remember a great person – and he was – but also to look around at the bonds that we all form in this hobby. Cars are a great subject to start a friendship over, but many of those friendships go much deeper and I have no doubt that we’ve all learned a lot about life, the universe, and everything from friends we’ve made because we have a common interest in four wheels, a motor, and something those cars say to us. As for Stu, I’ll bet he’s having a heck of a time wherever he is now, and behind the wheel of something fantastic. With velour.

12 thoughts on “The Car Hobby and the Friends We Make: In Memory of Stu Hammel” Leave a comment ›

Totally That Stupid – Car Geekdom, and a little bit of life. The Car Hobby and the Friends We Make: In Memory of Stu Hammel
Loading Comments...
%d bloggers like this: