Although I decided not to purchase a Kia Optima Hybrid after the test drive a few weeks back, I have to admit the newer car had certain features that left me envious. Don’t get me wrong: the Accord Hybrid has power everything from windows to sunroof to seat heaters, along with automatic climate control and even side view mirror defrosters. In fact, the Accord is at least as well-equipped as my wife’s Mercedes E320 4Matic wagon, save for the navigation system, and to tell the truth my TomTom is better than the 2005 Mercedes COMAND system.

Still, there are some things that were not available in the Accord due mainly to the fact that it is going on six years old and, well, technology has changed. The feature that really left me wanting after driving a newer car is the iPod/iPhone connection. The Accord has XM/Sirius satellite radio, which I subscribe to, but I also enjoy my own playlist as well as Pandora and live streams from UK and Hong Kong radio stations. I tried an FM modulator, but it seemed like every ten seconds I was having to change the frequency and even then the static came in and out. A lot. So I started researching iPod integration kits compatible with the Honda stereo, and there are a lot. The problem is that none of them seemed to work with the satellite radio. Not for nothing, but I still have about 8 months on my current subscription, and like I said before, I like satellite radio.

After surfing and clicking for what seemed like hours (but was probably about 12 minutes), I came across an adaptor from a company called Integrated Solutions. They actually offer a few kits, but one of them specifically addresses the satellite issue and retains full functionality. It also displays song information and allows control of the iPod from the stereo as well as the steering wheel controls. For $145 and free shipping I decided to pull the trigger. 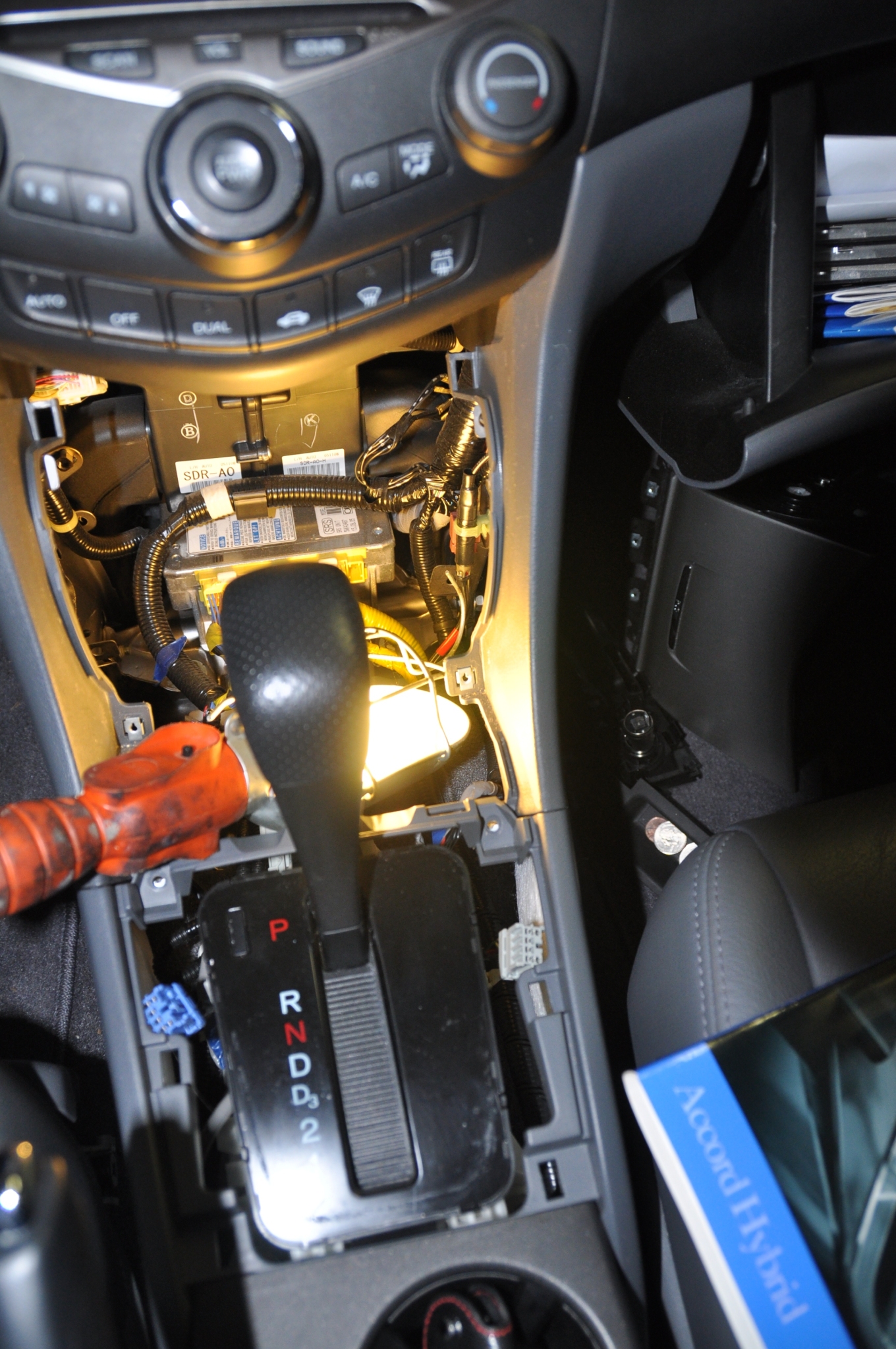 My first challenge was to figure out how to take the console apart. If you haven’t noticed lately, there are no visible screws in car interiors any more, just hidden clips and pressed fittings. Fortunately, I found a YouTube video that described the procedure in detail. It’s amazing what you can learn on YouTube: everything from how to dismantle a Honda Accord console to how to play the guitar riff from The Beatles’ I’ve Got a Feeling. Been trying to learn that since about 1986. In any case, my Accord was amazingly built just like the one in the video, and it all came apart with remarkable ease.

Once apart it was pretty easy to unplug the satellite receiver from the back of the stereo. That is where the iPod kit’s splitter connects to the stereo, then one line to the satellite and the other to the iPod adaptor and on to the iPod or iPhone. The instructions were very straightforward and it all connected up quite simply. I tested the system and to my surprise and delight it actually worked. Understand that DIY is not my forte, so the little successes like this are real ego-boosters for me.

I ran the iPod wire through the console to the storage box between the seats where I’d previously had my charger connected. In fact, the only challenge with the wiring was the very short satellite receiver wire which got in the way of re-installation of the storage box under the radio. I plugged everything back in screwed it back together and clipped all of the trim panels back in place. Then I tested it again and received a “Check Antenna” message from the stereo when I switched to satellite. Ugh.

The feeling of resounding success quickly became the feeling of automotive dread I’ve had many times before: when I torqued the oil pan bolt right off my mom’s Mercedes, when I accidentally threw the radiator drain plug out with the drained coolant from the Alfa, or when I cross-threaded the Honda Prelude’s spark plugs. Nonetheless, I pulled it all back apart and found that when I ticked the wiring up behind the stereo I had accidentally loosened the connector to the satellite receiver, so I plugged it back in and tested it. The I re-assembled the whole lot once again, this time with the stereo tuned to XM just to make sure I didn’t accidentally disconnect it again. Surprise of surprises I didn’t, and what’s more the iPod connector still worked as well. So here I sit having successfully completed the install of my iPod/iPhone adaptor which charges my phone while it plays my music directly through the stereo in my daily driver appliance. If I’m going to spend 2+ hours per day in the car, I want my music. Now I have it. Fingers crossed it keeps working..

Totally That Stupid – Car Geekdom, and a little bit of life. Garage Corner: Satisfaction in the form of an iPod install for the 2006 Honda Accord Hybrid
Loading Comments...
%d bloggers like this: