An occasional TTS reader, who is also a Porsche 911 fanatic, told me he likes the blog but asked when we are going to cover some “real” cars? Considering some of the very real cars we have covered, I can only take that to mean that down there in Oak Ridge, Tennessee where the scientists glow green in the dark (also, incidentally, where my the aforementioned reader lives and works) “real” must somehow equate to squat, rear-engined, and German. If I were to accept that definition, in my world it would also mean “air-cooled” – as nature intended. But alas, he’s a water-cooled Porsche junkie. Nonetheless, the dialog reminded me of a sad chapter in my own life – related to the last of the Porsche 911s – the 993 – a car just like the car featured here .

It was 1997 – a fall Saturday. I got the call that I long to receive once every 10 years or so: it was my dad, and he wanted to go car shopping. Car shopping with my dad has been one of the joys in life I have cherished since I remember the 1969 Pontiac LeMans rolling out of the service bay at Rudy’s Pontiac in Norwalk, Connecticut for delivery. It wasn’t a new car, but it was new to us, shiny, and smelled like new 1970s car. I remember poring over brochures and options lists, I would always submit my choices and then they would be pared-down by a more money-conscious dad, especially for the company cars. Although I have to admit, one of my prouder car-shopping successes was talking him into the Mercedes 280TE instead of the 4-cylinder 230TE because the rectangular headlights were far more attractive than the rounds. But I digress.

From the first time I plopped my posterior into his old Fiat 850, I could remember dad talking about someday owning a Porsche. It was his brass ring. We’d had the Fiat and later an Alfa spider, but the Porsche was a whole different level of car. On that day in 1997 not only were we going car shopping, but it was time to look at Porsches. I was as giddy as a schoolgirl. Or something like that but less creepy.

We got to the dealership, walked the lot a bit, and finally took a deep breath and headed inside anticipating the barrage of sales folk. Fortunately, they were all too busy to be bothered with us and we were able to poke around ourselves. There was a gorgeous 993 there in the showroom – a rare Targa which by that iteration of the original 911 was really just a huge glass sunroof that could slide down under the backlight. The Targas are my favorites of the 993-series 911s, and that was the model my sights were set on. We walked around the car, we touched it, we opened the door. I got in first – it was tight (I’m not exactly small) but it was classic 911 but with all sorts of modern accoutrements like rocker switches that control everything from the windows to the rear spoiler, air conditioning and bolstered leather seats neatly offset by the old-style dash, gauges, and floor-hinged pedals. Three of them – the one on the left working collaboratively with the slick G50 6-speed shifter. It was paradise, that listed for about $70 grand.

Then it was Dad’s turn. I was already thinking color and options. I foresaw weekend trips with my relatively new wife behind the wheel. I would most certainly detail it regularly and for free for the privilege… And then it came: the buzzkill of all buzzkills – the words that echo in my mind still today: “I don’t like this for s**t.” Huh? Seriously? WHAT?? Nope. He hated it. Loved the looks, but found the interior cramped and the seats “pinched [his] ass.” That was it. The end. There would be no new 911. He ended-up buying a then new 4th-generation Honda Prelude, which was actually a pretty neat car and I did manage to put a few fun miles on it, but it was most certainly not a Porsche. 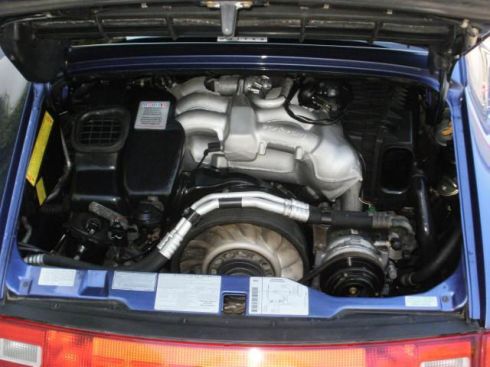 I’d still have one, and look around at them once in a while, but good 993s are still minimum $30,000 cars. Now, for someone without need to seat four, this is the same $30K which will buy you a decent Toyonda sedan. For those of us for whom this would be a third or fourth car, on a budget, it’s an extravagance, and one I still haven’t found a way to justify.

Still, I see these 911s going up in value over the long run. I like the car here not only as one of the last (they stopped making the air-cooled cars in early 1998), but also because it isn’t red, black, white, or silver. I like my 911s of all ages in colors – colors like this metallic blue. I’m also a fan of the various shades of bronze, burgundy, and even some of the greens. A nice thing about Porsche 911s was that the range of available colors (when you factor in the availability of special order colors) is immense even today.

These 911s with the 3.6 liter flat-6 boxer motor produced 285hp which could in turn deliver 0-60 in about 5.5 seconds and a top speed upwards of 170mph. Yes, please! They also had revised suspension geometry meant to reduce lift-throttle oversteer: a design continued to the subsequent water-cooled 911s. With regular care, air-cooled 911s can be hugely reliable cars, especially for near-supercars. They offer the driving performance, handling, and looks but without the headaches and huge bills associated with the Italians. To quote Ferris Bueller, “if you have the means……..”

This entry was posted on Tuesday, December 20th, 2011 at 10:34 AM and tagged with 911, 993, Air-cooled, Alfa Spider, Fiat 850, German Cars, Porsche, Super Cars, Water-cooled and posted in Story Time!, Totally That Stupid. You can follow any responses to this entry through the RSS 2.0 feed.
« I Might Like You Better If I Knew What This Car Was
Garage Corner: Satisfaction in the form of an iPod install for the 2006 Honda Accord Hybrid »