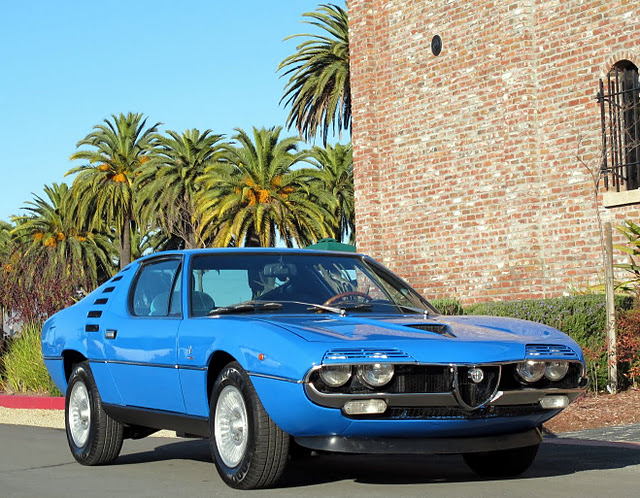 From the 1950s through the 1970s, Alfa Romeo was best known for peppy four-cylinder cars like the GTV, Giulia, Giulietta, Duetto, and later the kamm-tail Spider. The cars were penned by great designers from the houses of Pininfarina and Bertone, and they were among the most classically attractive cars of the day with designs that still look both beautiful and functional even today. The DOHC inline-4 served owners reliably over the years in a variety of displacements and states of tune, culminating with the 2.0 liter in the 1970s, equipped with Spica mechanical fuel injection to help them meet U.S. emissions regulations. 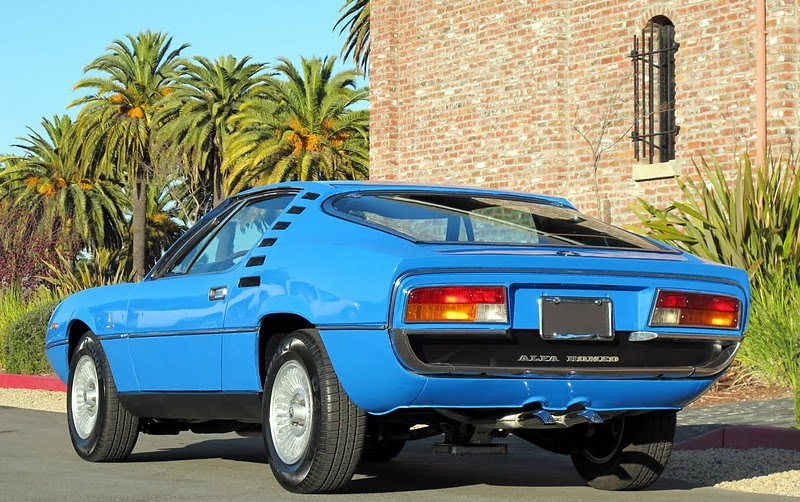 In 1967, however, Alfa displayed a radically modern show car at the “Expo 67” in Montreal, Canada. It didn’t have an official name at show time, but came to be called the “Montreal”. The show car contained one of Alfas venerable DOHC fours shrouded in bodywork designed by Bertone’s Marcelo Gandini who just a couple of years earlier had penned the Lamborghini Miura (with which the Montreal shares more than a couple of design cues). Fast forward a few years, and in 1970 Alfa released the Montreal as a production car, changed very little in appearance from the show car, but running a four-cam 2.6 liter V8 with the same Spica injection (times two) that graced the four-cylinders. Find this nice original and very blue example . 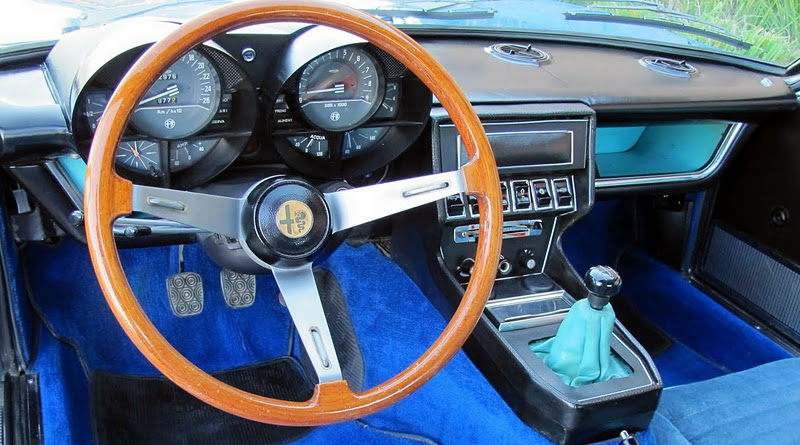 Like many show cars, the Montreal wears a number of slats, louvers, and ducts that add to the car’s dramatic, show car appearance but really serve no functional purpose. Note the six slats immediately rear of the doors – what do they do? Absolutely nothing but draw your eye to the curved contour of the door and the raked rear window. Likewise the louvers over the headlights, which power out of the way when the lights are turned on, make the steep front end appear much sleeker than it really is.

Inside the car the driver is presented with a beautiful Personal (brand) laquered wood steering wheel identical to that used in other period Alfas. The gauge pods will be familiar to anyone who has spent time in a 1970s-vintage Alfa, as will the various and sundry switches. In fact much of the inside of the Montreal was poached from other Alfas, but it all fits together well, and much better than in many contemporary supercars.

If you’ve never driven a Montreal, you need to if for no other reason than to hear the motor make its way through the revs. It sounds glorious. Vintage Italian cars, after all, didn’t make a reputation on reliability or durability, they built cars around great motors just like this. The ZF 5-speed transmission is easy to manipulate if slightly notchy. Performance wasn’t blinding but was very competitive for the day, with the 197hp motor bringing 0-60mph in a quick 7.2 seconds with a top speed just under 140mph – respectable numbers even today.

With an unknown reserve the sellers of this car could have very high expectations for the money it will bring, especially considering the recent tear-down and rebuild of the motor. The car appears to be in very good condition, but it should be noted that it is described by the seller as a “driver quality” car. That normally means it has numerous flaws that would cost any car major points on the show field. I sure does photograph well, though. Montreals in reasonable condition usually start around $25,000 these days, and given their rarity (only 3917 built from 1970 through 1977) and over-the-top Italian show car styling represent an appealing supercar buy that will only go up in value over time. find numerous detailed pictures of this Montreal here on Picasa.

Totally That Stupid – Car Geekdom, and a little bit of life. Your Own Personal Show Car (but you gotta like blue): 1973 Alfa Romeo Montreal