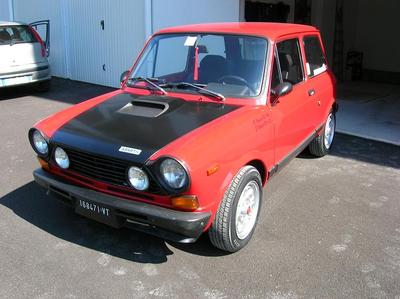 Before the VW GTI and the Alfasud, the Autobianchi A112 and the Mini Cooper were the cars that really launched the “hot hatch” category. Add the genius of Carlo Abarth, and the cute little Fiat 127-based runabout – reportedly the last car that Sr. Abarth was personally involved in developing – started to snarl. 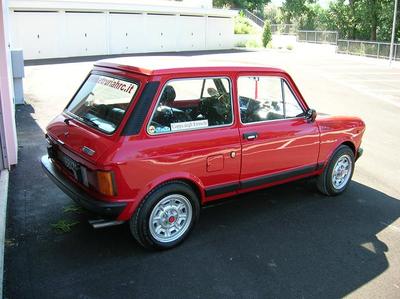 The 1978 Series IV A112 Abarth came with a 1049cc 70HP engine that could trace its roots back to the rear-engined Fiat 850 series, which was enough to propel the 1550 lb car to a top speed of just a hair under 100mph. Abarth shaved about 6 seconds off the standard A112’s 0-60 acceleration time, bringing it in at about 11.7 seconds. The 70hp version also saw upgrades to the fuel delivery and braking systems. The prospective owner would be well-advised to check for a weak 2nd gear synchromesh, which is apparently a flaw in the DNA of just about everything Italian of this vintage.

This car could be easily imported to the US without modification, falling beyond the 25-year importation exemption. A U.S. buyer should add between $1,500 and $2,000 to the price for shipping and customs. This car appears remarkably solid for anything to come out of Italy prior to, well, yesterday, likely thanks mostly to the extremely low miles. The Series IV’s interior was the A112’s first foray into the modern area. Up to 1977 and the series III, the A112 had the typical basic Italian dash layout that would be equally in home in a Fiat 500 as an Alfa Romeo 105-series or a Lancia Berlina. The Series IV also saw some exterior modification from earlier cars – most notably a taller greenhouse for a roomier feeling and better visibility.

This car would be a surefire hit at the next FLU gathering or Fiat Freakout, and with a little bit of work could be the standout at a much bigger show. Better yet, can you say track monster?? In any case, it is certain to be a party to toss around on your favorite back roads. And they used Minis for the Italian Job?

One thought on “Minis for Breakfast: 1978 Autobianchi Abarth A112” Leave a comment ›