If you haven’t yet surmised, one of the things we like to talk about at TotallyThatStupid is classic cars we can afford which can be driven on a regular basis. There is perhaps no better embodiment of that than the Mercedes-Benz W123-series sold in the U.S. from 1977-1985. W123s hearken back to the times when Mercedes really lived by their philosophy of “The Best or Nothing” which they are trying to revive today, although J.D. Power ratings might suggest otherwise. Frankly, if I could buy a new W123 today, I would. They offer road feel, handling, comfort, durability, and reliability in a reasonably-sized package, although that reliability is predicated on the owner’s willingness and ability to keep up with a regimented schedule of regular oil changes and valve adjustments. However, since I can’t have a new one, I am forever looking for good old ones. 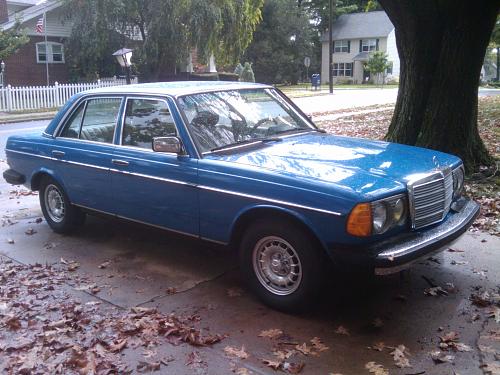 Because they are capable of hundreds of thousands of miles, especially the diesels, too many W123s are ridden hard and put away wet. There are owners who will look after them mechanically to keep them chugging along, but the comfort and aesthetic factors are often left out of the equation. Still, these cars were made with good stuff for the most part, and with a relatively modest amount of attention can be kept in very nice condition inside and out. Even when they’ve been a little abused or bear the scars of a hard life, many pieces – both inside and out – are still available new from Mercedes, and what you can’t get new can usually be found from one of the dozens of Mercedes wrecking yards around the country.

Fail points on W123s are pretty basic. First and foremost: rust. These cars were not exceptionally well-protected from tinworm when new, and cars from the snow belt will inevitably show it. The critical places to look are the front valance, rocker panels (particularly around the jacking points), fender and door bottoms, growing from behind the beltline moldings, bottoms of the rear quarter panels, and the back door opening “doglegs”. That said, it can sprout up anywhere, so check the body thoroughly. On this inside, the biggest issue I’ve encountered is water leaking in due to bad front or rear window seals or clogged drains. This is usually evidenced by water collecting in the rear floorboard (soggy carpets) and a musty odor that will NEVER go away. Cracked dashes are relatively common as well, especially with the Blue interiors, although dash caps are available that come reasonably close to looking original, but are no replacement for the real deal.

What makes this particular car compelling is that the rust issues have been addressed – which invariably leads to speculation about how well it was done. The interior is very clean MB-tex, which is unusual for a car with the parchment colored upholstery – it usually bears the patina of a Middle East taxicab. The turbodiesel motor – for my money – is the best option in the W123. Sure, it’s not as powerful nor as quick as the M110 2.8 DOHC inline-6, but it is also less thirsty and less stressed, meaning very likely more durable for the long haul. Even though it’s a diesel, performance is respectable with 0-60 in anywhere from 11-13 seconds depending on who you believe, top speed around 100mph, and happy to cruise at 80 all day long. 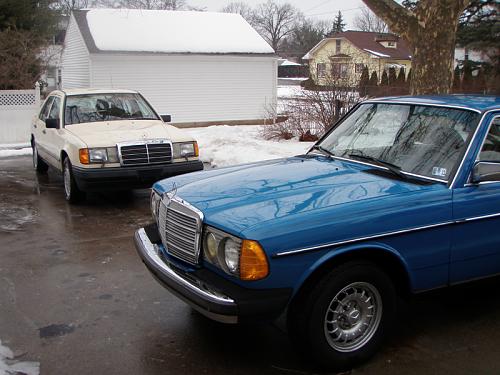 If I were to buy this car – and I am thinking about it – I would replace the ugly sealed-beam US headlights with the rectangular European units it was designed with. There are two camps on this, but just from a safety standpoint alone the Euro lights are far superior, and pairs of decent aftermarket units complete with bulbs and turn signals can be had for less than $300. Other than that, the seller reports that “almost” everything works, excepting the tachometer. That is a fairly common issue likely to be related to the tach amplifier. What is not said, and is a huge question mark in my mind, is whether the automatic climate control is working. The price for this car is about market correct for a clean 300DT with 260K on the clock, so long as there are no major surprises. It’s really a hard package to beat for someone who wants to drive something classic and just a little bit different on a regular basis, with most of the comforts of modern motoring. Or, the seller also has a clean 1986 300E with ortho seats for sale as well, if you just gotta have a gasser….