Named for one of the most iconic airplanes of all time, the Triumph Spitfire came to market in 1962 and stayed in production through 1980, with relatively few major changes across the entire model run. Sure, the car was modernized, and like every other attractive car from the time it was adorned with hideous big rubber baby buggy bumpers to meet U.S. DOT safety regulations. Still, all the way through its run the Spit looked every bit the classic sports car, and offered go-kart handling and mechanical simplicity to round out the package. Nowadays, all but the best Spitfires can be had for little more than the cost of a new television (less than many, actually). .

As a 1978, this car is equipped with the largest Spitfire motor – the 1493cc inline-4 cylinder. In U.S. emissions-starved spec this motor put out a modest 53hp which accounted for the 0-60 time in approximately 14 seconds. But if you are shopping for outright speed, this isn’t the kind of car you should be looking for. This car is about putting the top down and building a close personal relationship with every curve, bump and dip on your favorite road. However, there are numerous performance specialists like Performance Research Industries serving the Spitfire community that offer parts and engine services with the potential to more than double the Spitfire’s power – for a price, of course. 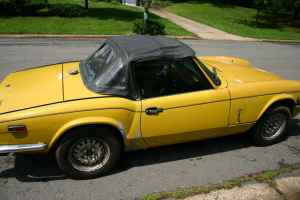 One of the chief appeals of the Spitfire is its simplicity. The large clamshell hood opens to reveal an utterly accessible, well, everything in front of the firewall. For the weekend wrencher this means everything from an oil change to a full engine rebuild is within reach. Steering is rack and pinion, and feels almost like a direct link between road and driver. Likewise, shift action in the 4-speed overdrive transmission is positive and direct. It’s cars like this where man and machine really do come together. 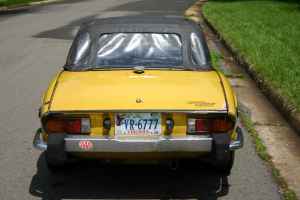 This car, like its counterparts in the same general price range, is going to need a little love from its next owner. The seller indicates that the body is solid and generally straight, with a few spots that would benefit from some attention. A little elbow grease and a Maaco paintjob could be just what the doctor ordered here. Mechanically the car is reportedly in fine fettle, with a recent carb rebuild, alternator, fuel pump, and clutch. It also has a new top, although it needs a little bit of fitting – if you plan to put it up. Ever. It also comes with a set of brand new chrome wheels with adaptors reportedly worth $1000 alone, although I’d probably sell those in favor of something like a set of minilites, or even just refinish the steelies and pocket the cash. In any case, this is cheap fun from any angle.

This entry was posted on Thursday, October 6th, 2011 at 5:45 AM and tagged with Spitfire, Sports Car, Triumph and posted in Disposable Sports Car. You can follow any responses to this entry through the RSS 2.0 feed.
« 1981 Mercedes-Benz 380SE Euro: Fab Green Machine
1969 Maserati Ghibli Spyder Conversion: Fraction of the cost of an original »