Today must be our retrospective on 1985 – the year of “Back to the Future”, Gorbachev, the Achille Lauro, “We are the World” and “Money for Nothing”. First there was the pretty low-mile Alfa Spider Graduate, and now this really quite unique and outstanding 190E 2.3-16 AMG. Yup. AMG. And this was before AMG was a subsidary of Daimler-Benz, but was rather THE independent tuner for all things Mercedes. With just 50,000 miles on the clock, even with a few niggling needs! 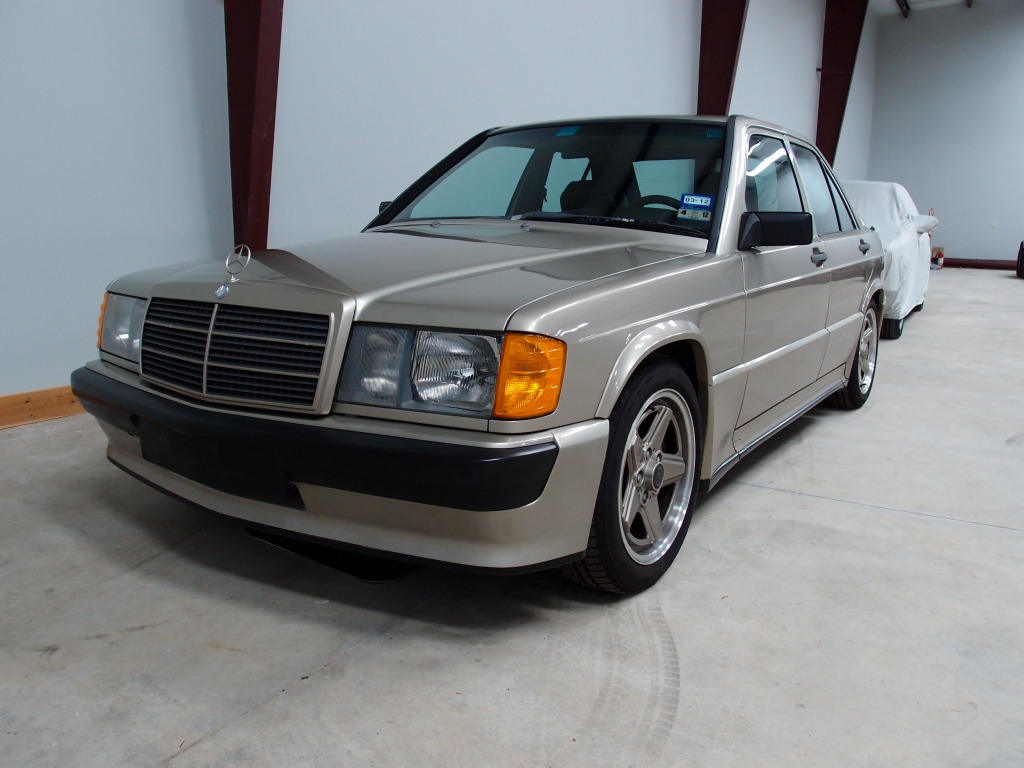 For many Mercedes-Benz aficionados, the 190-series was an unwelcomed departure from solid, substantial cars into the realm of *lesser* brands and econocars. It was the Mercedes equivalent of a Corolla – UNTIL the 16v came along. With help from the experts at Britain’s Cosworth (also famed for tweaking assorted Lotuses (Loti?), Fords, and even a Chevy Vega), Mercedes aimed to build a formidable challenger to the rallying elite, and nearly did it. The car was great – even managed to sustain 200+ mph at Nardo with Senna behind the wheel in testing. No, the problem was not with the 190, it was the competition. While all of this development was going on, Audi released the Quattro, which changed the rally game for everyone. The 16v was a purpose-built car with no purpose.

What the experts at Affalterbach did was to extract yet more power from the little 2.3 four-banger. As you can see, the documentation shows an upgrade to 201hp from the original 185hp. Certainly enough to make a difference on the road and by the seat of your pants. On the road, these are actually quite engaging little cars, and with room for four, comfortably. The early 16vs came in either Smoke Silver, like this example, or Pearl Black. All of them had black interiors, although some had funky black-and-white checked cloth inserts on the seats. The AMG “Penta” wheels with the centers finished in matching Smoke Silver are correct for the period and the car, and offer a nice visual alternative to the standard 15×7 flat-faced factory rims. The seller reports minor rust on the front fenders – stop it before it spreads!!! 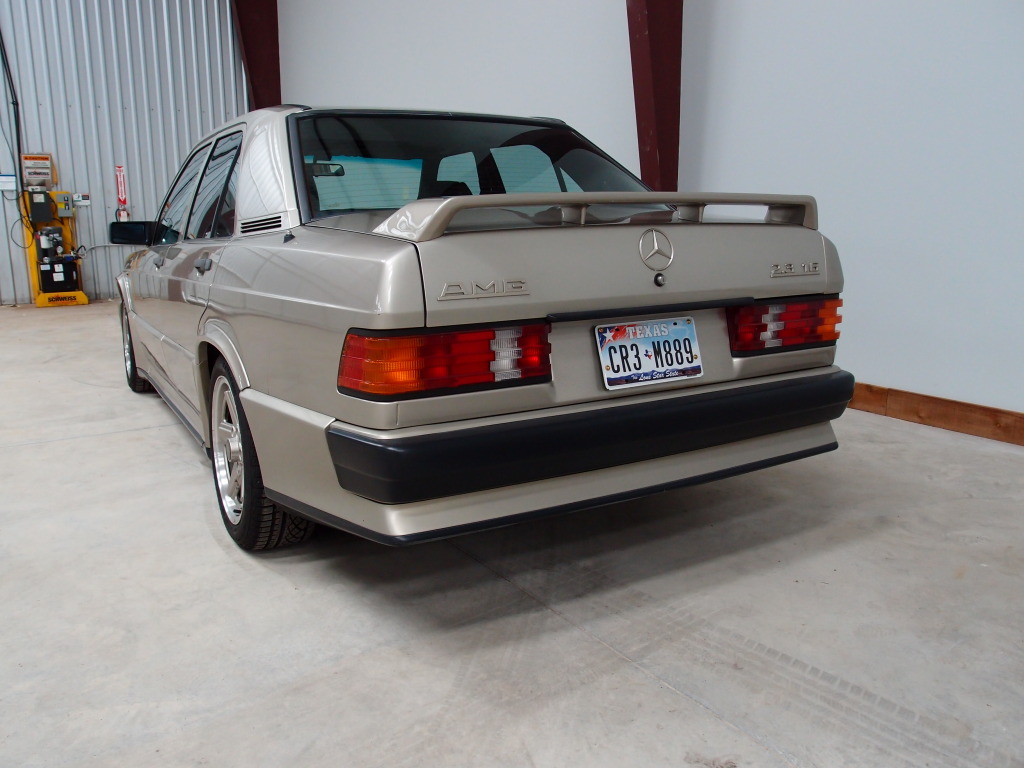 All of the ground-effects you see on this car were original to the 190E 2.3-16, and are not AMG add-ons. The wheels and the mechanical modifications seem to be where the money was spent at AMG. While slightly “boy racer-ish”, the aero bolt-ons were actually extremely well-vetted during testing and each serves a functional purpose. We really like the subtle difference that the true European headlights make to cleaning-up the front-end. It’s a shame that the vacuum-adjust is not working, but it was probably disconnected during Federalization and could be made right fairly easily. 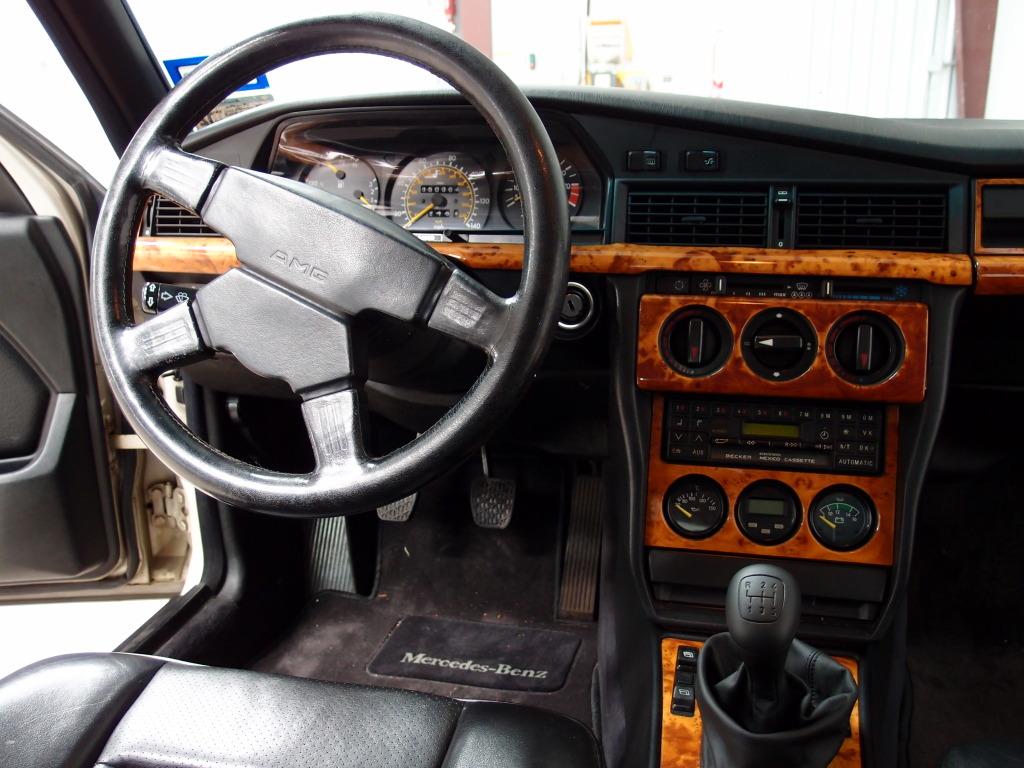 Inside the car, the AMG steering wheel and the burled wood accents are not original, but neither is overly tacky and they are appropriate for the car as it sits. There is a crack above the switch for the rear defroster, which most of these cars have. On the other hand, the lcd timer in the lower gauge panel is unusually clear. The seller indicates that the AC is non-operative due to a missing compressor. That’s a pretty good reason for it not to work, but hopefully for those in warm areas it is a fairly straightforward fix. Otherwise, everything else is reportedly functional. The European manual climate control unit is always a welcome sight, meaning a lot less vacuum actuators scattered around behind the dashboard.

16vs came with self-leveling rear suspension, which actually makes these cars handle the twisties far better than their lesser brethern. The dogleg transmission is a novelty, but can get tiresome if you use the car for any sort of stop-and-go driving. A standard 16v comes to life at about 4000 rpm, and you can’t be afraid to rev it to the limit to extract its full potential. With the additional power, I wonder if it doesn’t kick-in a little lower in this car. All in all a great track car or weekend bomber – if you have the fun roads to challenge it. See more seller photos here on Flickr.

Totally That Stupid – Car Geekdom, and a little bit of life. 1985 Mercedes-Benz 190E 2.3-16 AMG: Three Little Letters that make All the Difference!
Loading Comments...
%d bloggers like this: