As the old adage goes: There’s no replacement for displacement. Chrysler Corporation reminded us of that in spades when they released the bonkers Viper for model year 1992 with a monstrous naturally-aspirated 8.0 liter (488 cubic inch) V-10 motor. But the Viper was not the only MOPAR to be graced with this stomping powerplant – in 2004 they released the Dodge Ram SRT-10 pickup truck with the same basic motor as the original Viper, but now displacing 8.3 liters (505 cubic inches) in all its V-10 glory. These days, both cars represent some of the best of American muscle motoring in its truest form, and both can be had in near perfect condition for about the same price as a fully decked-out MX-5 Miata. And While we love Miatas and they are usually the answer to every automotive question, Miatas can’t answer this one.

I recall pretty vividly when the Dodge Viper show car was introduced in 1989 at Detroit’s North American International Auto Show. It was the talk of the town: all the magazines lamented its awesomeness as a Cobra for the modern era. Heck, Carroll Shelby even drove the production Viper at its introduction at the 1991 Indianapolis 500! None of us, however, thought Viper would ever see production. Or if it did, we expected something looking more like a Chrysler TC by Maserati by the time the accountants and DOT regulations were done with it. When the street car was finally introduced in 1991 as a 1992 model, I couldn’t believe they’d actually pulled it off – and so close in design to the original show car.

Even by 1992 standards, the cabin can best be describes as “austere”. The original Viper came without basic amenities such as air conditioning and even exterior door handles (you had to do a reach-around to get in) – or even side windows for that matter. Instead, it came with removable side curtains that you unzipped to access the interior door handle, a canvas top, and a removable rear window. This example comes with both the canvas top and the later-added fiberglass hardtop. Vipers also lacked somewhat standard period safety baubles as airbags, antilock brakes, and traction control. It did, however, come with a six-speed manual transmission at a time when 5-speeds were still the norm and the extra cog was considered “exotic and, interestingly, adjustable lumbar support. Later cars did offer air conditioning as an option, but it was derided as being strong but largely ineffective apart from cooling the body part it was specifically directed toward.  But that really wasn’t the point was it.

This V-10 engine was the point – combined with the relatively light (3200 lb) curb weight and Borg-Warner six-speed manual transmission. The original Viper’s engine delivered 400 horsepower and 465 lb-ft of torque, which pushed the car from 0-60mph in a then-stunning (and still impressive) 4.6 seconds. The quarter mile run took just 12.6 seconds and the car maxed-out at a frightening for all but the best drivers 165 miles per hour. Fuel economy was rated at 12mpg around town and 20 (!) on the highway thanks to long gearing. But once again, that wasn’t the point, was it? 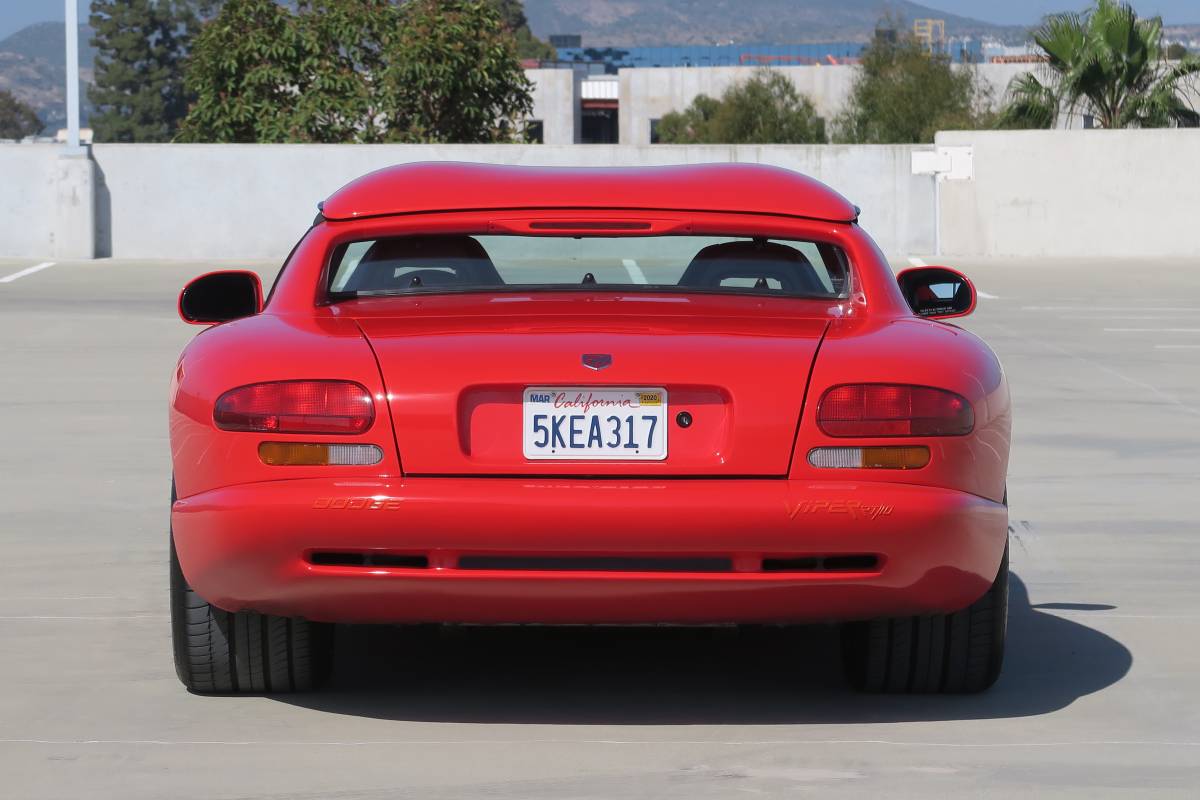 As Vipers go, the original is our favorite. When new, MSRP on this car was $57,300 – or about $99,000 in today’s money. Not cheap by any means, but less than just about any exotic performance car then or now. This car – wearing just 9,541 miles – is essentially a new old stock car. Subsequent Vipers retained the long nose/short rear/V-10 layout, but by the end of the run in 2017 had moved away from its raw roots with accessories like power windows, navigation systems, power heated seats, and all of those safety nannies that were blissfully absent on the original. Sure, it was a safer car and easier to use and drive fast on a regular basis, but I would argue that in 2017 there were better cars out there for that purpose. Can I have Corvette for $100, Alex? 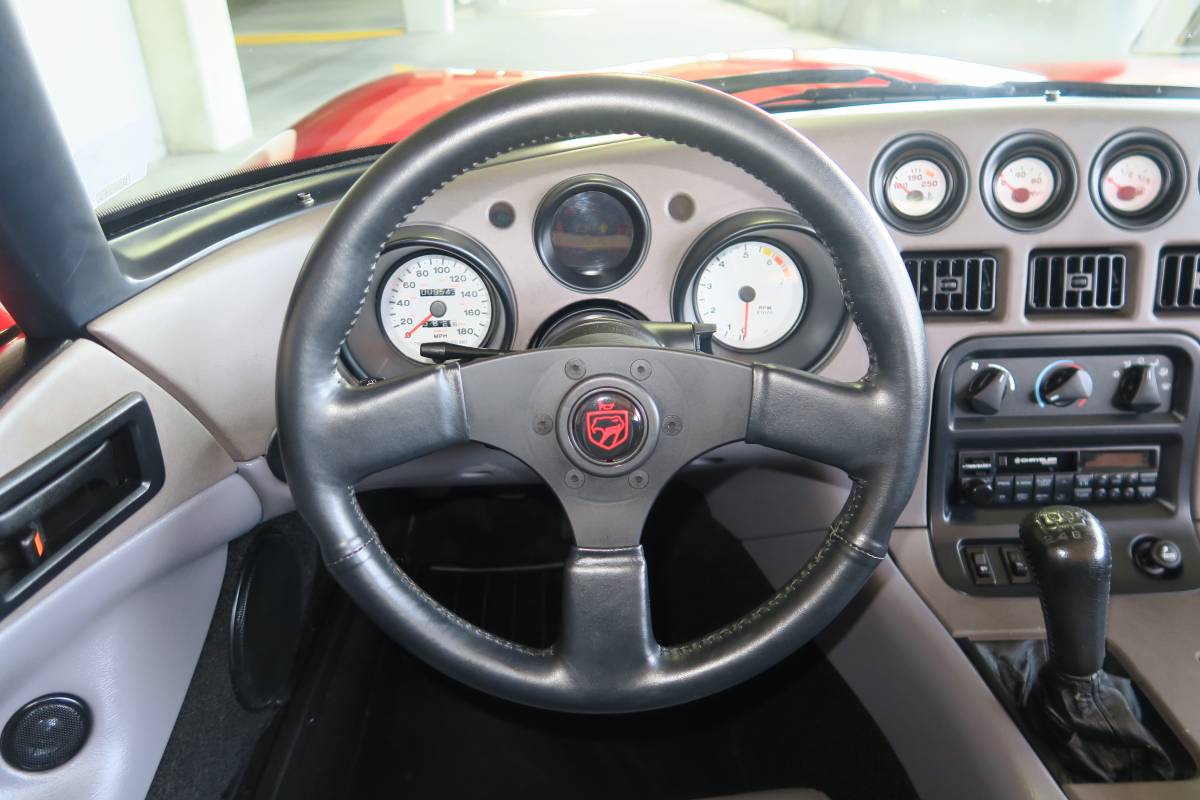 I certainly wouldn’t be inclined to drive a Viper on my regular morning commute, but they just don’t make ’em like this any more. Hell, they didn’t make them like this in 1994! As a future collector’s muscle/sports/two-seater/weekend car, this one is VERY hard to beat. I could very happily sit in this perch with full gauges in front and to my right, six-speed falling to my hand, and V-10 roaring in front of me to tour the byways and broad sweeping back roads all around where I live. It does get hot here, so I might want to find one with air conditioning. Not.

The Viper is a great car, and I’d LOVE to drive one, but this is ‘Murica, and we like big things like super-size McDonald’s meals, the Grand Canyon, Texas, and our pick ’em up trucks. The Ram SRT-10 takes much of what is great about the Viper (read: the V-10 engine and six-speed manual) and shoehorns it into the already brutish Ram pickup. If the US of A was an automobile, this would be it. 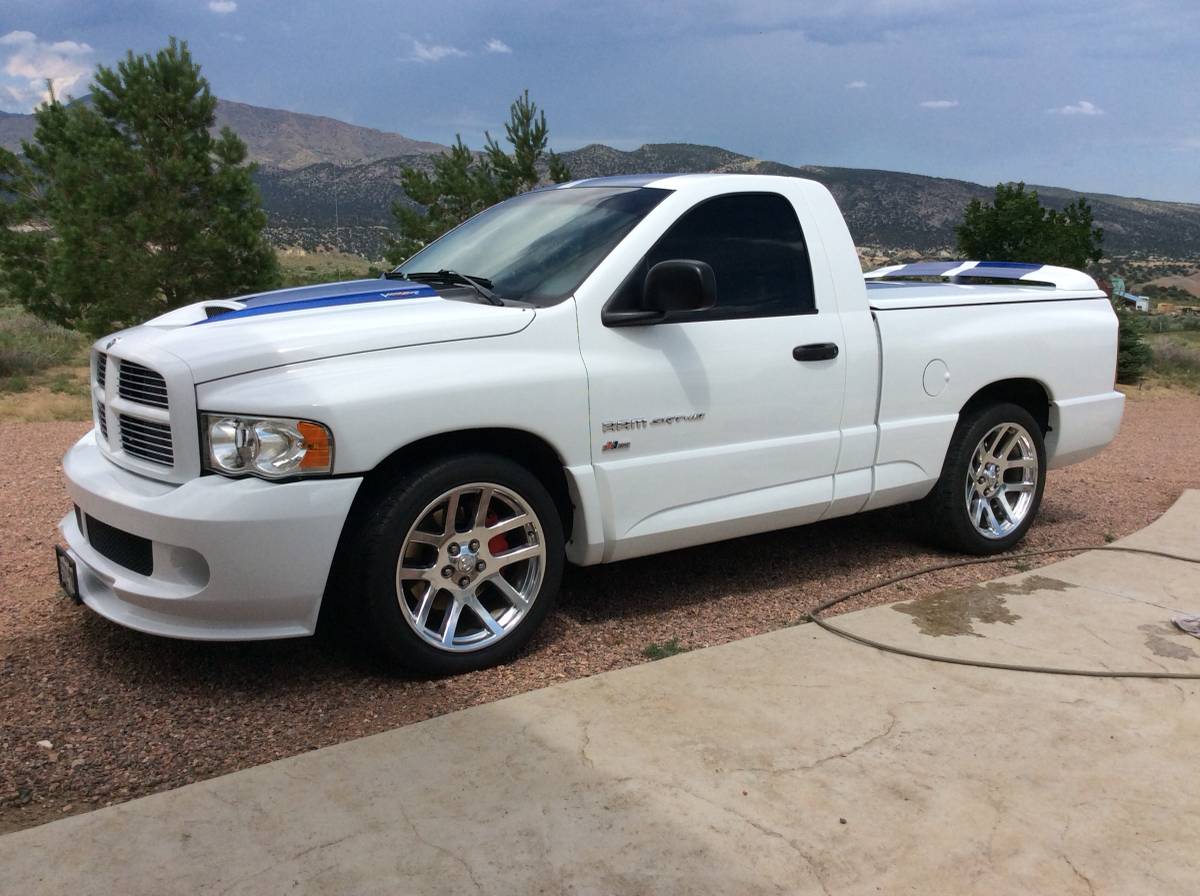 Dodge had played with Viper engines in Ram trucks before this with the 1996 Ram VTS show truck, but that was never put into productions. DaimlerChrysler’s (yup, it was THOSE days) Performance Vehicle Operations team comprised of Viper and Prowler engineers made the SRT-10 happen starting for the 2004 model year after extensive testing. The engineers and designers reportedly spent a lot of time in the wind tunnel, given big power, truck aerodynamics, and light tail. You can see their efforts in the front airdam, side skirts, and rear spoiler (2005+ trucks also came standard with the hard bed tonneau cover). As a result, the SRT-10 was capable of a (non advisable) top speed of 154.5mph, just 10.5mph shy of the Viper we just finished talking about, and insane speed for ANY truck. 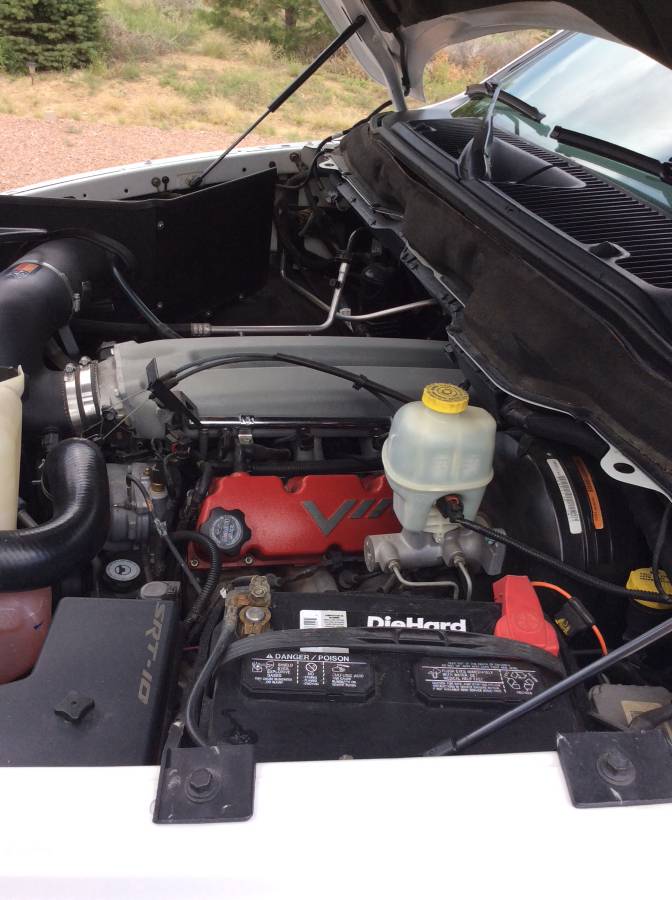 By 2005, the Viper’s V-10 had been bored out to 8.3 liters, and in Ram SRT-10 specification produced 500 horsepower and 525 lb-ft of torque. Performance was not far off of the original Viper, with 0-60mph in a scant 4.9 seconds and quarter mile of 13.6 seconds – in standard cab spec. Starting in 2005 a quad-cab version of the SRT-10 was made available that was just slightly slower all around than the two-door. Our choice is the regular cab  with its Viper-esque 2-seater (three if you’re a masochist) configuration, not only because we just think it’s cooler, but more importantly because the Quad-Cab was offered in automatic only, because, according to the entire auto industry, families don’t want stick shifts. They’re probably right and we’re in the minority, but it is what it is and that is fodder for another article on another day.

Like the contemporary  Viper, the SRT-10 was available with a Tremec six-speed manual transmission – as you can see here in our subject truck. An automatic was available, but, really? No.

The SRT-10 did offer a number of conveniences not available in our original Viper above, however. These include windows, a roof, air conditioning, airbag, and, well, regular modern car stuff. They even had Bluetooth, which is great because it sucks trying to hold your phone while you shift and steer.  AmIright? Truth is, the SRT-10 is a remarkably civilized vehicle. The seats are big and comfy, but well-bolstered for “spirited” driving. Period testers actually complained that the trucks were too quiet, given their performance prowess, but they still make a good growl. For the numbers folks out there, the SRT-10 doesn’t quite achieve the stellar economy of the Viper at just 9 mpg around town and 12 on the highway. The driver of an SRT-10 would be well-advised to map-out a road trip according to where gas stations are located and distance between them.

The seller of this truck provides very little descriptive information apart from the fact that it has 37,000 miles and is number 114 of 200 “Commemorative Edition” models produced, which included White exterior paint with Electric Blue stripes, blue stitching on the seats, shift boot, shift knob and steering wheel, floor mats embroidered in matching stitching with the SRT-10 logo, standard polished wheels and brushed aluminum scuff plates. The paint scheme is a little “in your face”, but isn’t that part of the appeal? The fact that this truck’s owner has added carpeting to soften the cargo bed doesn’t offend us. It is removable if need be, and who doesn’t want their cargo coddled?

We often talk about how we like to write about cars we would enjoy driving. That’s really the point of being Totally That Stupid: and I am totally stupid enough to want to drive and even live with either one of these for a while. Both of them shout “AMERICA”, but pushed to choose just one, I think I’d go against the grain and go for the SRT-10. It’s got a cool factor that few other stock pickup trucks have EVER had, but it is utterly usable. I *could* easily daily drive this truck, where the Viper would be relegated to weekend duty. Of course, that wouldn’t be such a bad thing either.