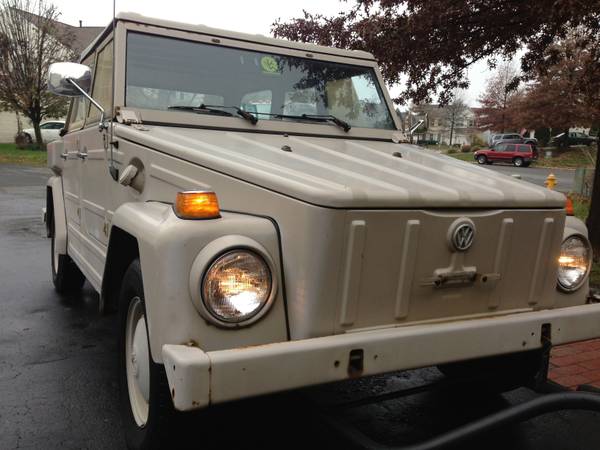 I know that the original Ricardo Montalban/Herve Villichez “Fantasy Island” used modified Dodge Aspen station wagons for their island runabouts, but every time I see a VW Thing that’s what I think of. They probably really wanted something like the Thing for the TV show, but got too much pressure from Chrysler. Could it perhaps have had anything to do with Montalban’s role promoting “rich Corinthian leather” for the Chrysler folks? Who can say? Regardless, the Thing would have been a far superior island car right up until it rusted out from under Montalban’s leather-loving hindquarters. But seriously: VW reliability, economy, and ruggedness instead of, well, Dodge? PLUS, the VW wouldn’t have required the extensive modifications that the Aspens did: door removal, funny, fringy roofs, and so on. The Thing was perfect right out of the box – just pick your color. Suffice it to say, I’m a Thing fan. 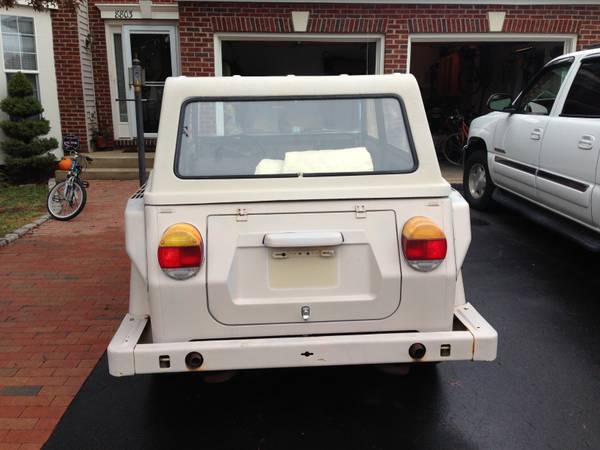 The Thing is very much a 4-door 4-seat utilitarian Bug. It shares basic mechanicals with the bug, but the floor pans come from the wider Karmann-Ghia coupe. The seats look as if they were pulled directly out of a Willys Jeep, and Things also have that “hose it out when you’re done” water-resistant interior that Jeep did (and does) so well. The Thing’s 1968 launch wasn’t actually VW’s first foray into this space: keen eyes will note that this $5,500 car – especially in it’s beige “Acapulco” edition glory – looks an awful lot like the WW2-era Kubelwagen, and rightfully so. The concept is basically the same. 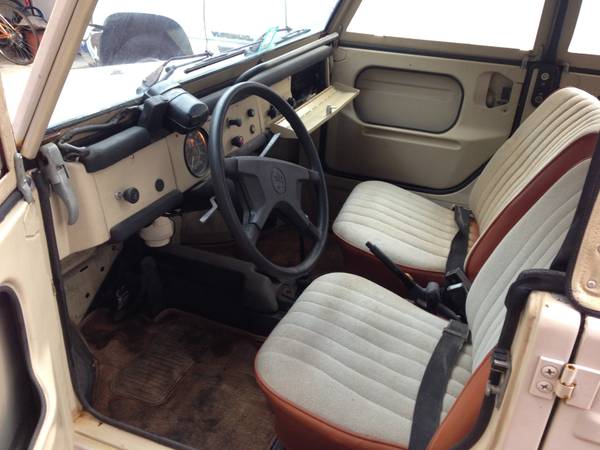 But the Thing is of a different age – from a time when Volkswagen was not the “people’s car” of a megalomaniacal nutter, but rather were the cars (and vans) of peace, love, and happiness. At least on American shores. VW had enjoyed sales success with the Bug and Microbus well beyond their expectations, and this was a logical next step. Although conceived at the request of multiple European governments looking for a Jeep of their own, the real market for the Thing was the US, and in particular, warmer, sunnier climes like Southern California and Florida. Talk about the ultimate surfer car. 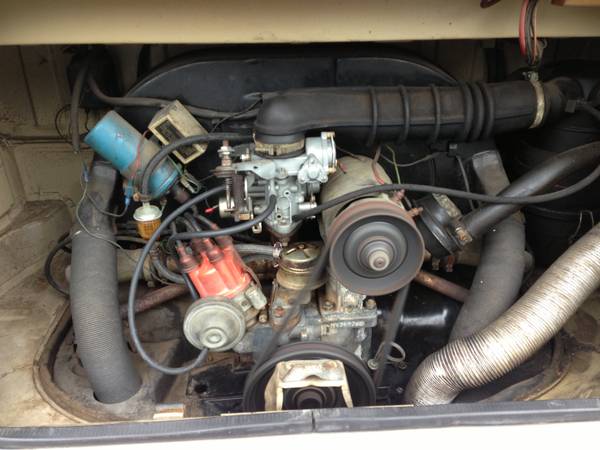 The Thing’s appeal to a goon like me is first and foremost it’s simplicity. This is a car you can tear down and re-assemble with tools and skills that you probably already have. Really, any period VW is like that but this one is just more so. Second, it occupies an interesting space as an affordable 4-door, 4-seat fun car for the family. Thing owners love to talk about their family exploits in their prized toys – usually involving beaches. I can see having a blast booming (slowly) around our local backroads with the top down (or in the case of this car – off). It is a perfect car for a warm weather picnic, to take for ice cream, or even just to hit Cars & Coffee – assuming it isn’t too hot out. They have heaters that will melt your shoes if properly sorted, but don’t lose a lot of time hunting for for an air conditioned Thing…. 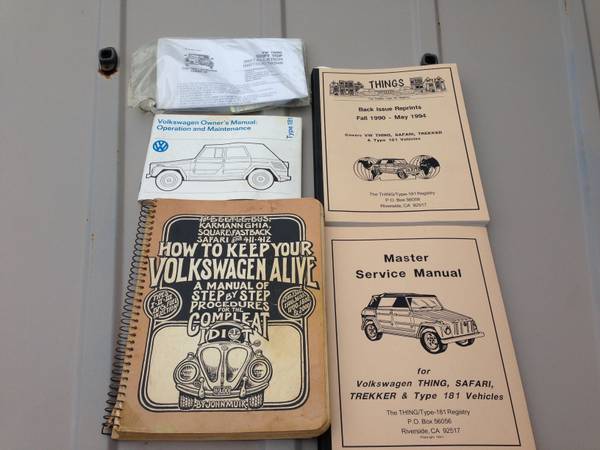 This example holds a few appeals in particular. The beige monochromatic paint scheme is perfect, especially if someone is thinking about making their Thing look like a Kubelwagen. Mount the spare tire on the hood, bolt a couple of shovels to the front fenders, and you’re most of the way there. Really ambitious folks would mount a sub machine gun on the back, but I think that might be overkill. The fact that the car has been previously restored – in 1992 – tells us that at least once upon a time it was loved. The number of enthusiast books that come with it would further support that fact. With a hard top mounted and a new convertible top in a box ready for installation (wlthough no mention of a frame..?), you should be covered for inclement weather. The only thing I’d change on this Thing in the short term would be the upholstery. These cars should have vinyl. Period. Beyond that, who couldn’t enjoy a Thing? Now imagine it with a Subaru or Boxster motor…