I can think of a LOT of things to do with $110,000. I could put my kids through a year or two of college, I could pay off part of my mortgage and build equity, heck, I could buy something like 50 NA Miatas. But that’s not what this is about. For people like me who habitually buy cars way farther down on the depreciation scale, someone has to pony up either the lease payment or financing for the new cars. And I appreciate that they do that. The 2014 Porsche 911 Carrera S is one of those cars that I hope a lot of people buy so that 10 or 15 years down the road I might be able to afford one. It’s a fabulous car – and for the price it should be – but it’s not without its flaws.

What struck me before I ever sat in the car is that 911s have grown. Interestingly, to look at the numbers they’re not THAT much larger than the original car that bore the 911 moniker – 10mm here, 18mm there, and so on. But to add it all up cumulatively and combined with the fact that both ends sit much higher than the original air-cooled 911, the new car is comparatively tubby (see photo comparison with one of Magnus Walker‘s very cool cars below). In some ways that’s not a bad thing. For example, there were two of us plus luggage, camera gear, etc. basically living out of this car for three days and it had no problem accommodating us. Likewise, you get a more airy sense of cabin space from the shoulders up in the new car than the old. For claustrophobics and personal space fiends like me, this is welcome growth. 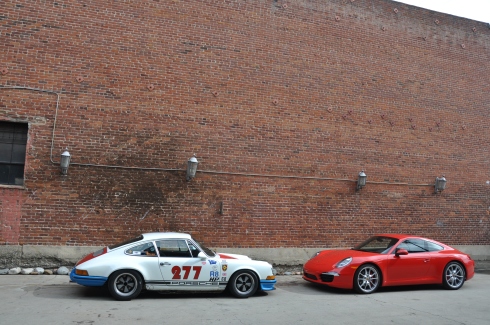 Where the increased size is less welcome is on the road. Well, let me rephrase that: On the highway it makes for excellent Bahnstorming, but on the fun roads where you want to extract the most from what is a very capable vehicle, it can be a bit much and I came close more than once to overwhelm the very competent damping system. I hate to say it, but traction control in this car is your friend, at least when you decide to challenge the car. Following a Boxster Spyder through the switchbacks of some of Southern California’s finest driving roads the 911 had a little bit of trouble keeping up, but made up the difference in the straightaways. Admittedly my driving and lack of knowledge of the roads may also have contributed..

The Carrera S’s 3.8 liter flat-6 produces a very capable 395hp, especially considering that despite my perception of the bulk of this car it still weighs only about 3,000 pounds. Some drivers commented that they were disappointed that it was not faster, but they had also gone from modified 911s bordering on race configuration into our “ordinary” production car, so they may have been biased. I do appreciate that Porsche still offers a proper row-your-own gearbox, but I found that 7 speeds were either one or two too many. I appreciate that the number of cogs gives you even more control to keep revs in the sweet spot, but frankly I was able to accomplish a lot just back and forth between second and third. I’d venture to say that in comparison, the PDK gearbox may be the way to go – but as a traditionalist I’d still opt for the manual. While acclimating to the car I managed to stall it once or twice, and found the auto-restart feature very handy if not equally as embarrassing as having to turn the key yourself. What I found less handy was the auto start-stop which, at least in our test car, had to crank longer than it seemed like it should have in order to resume your regular drive. I get that these things can save some fuel and emissions, but I can’t help but think they could also mean more frequent starter replacement in the long run – and as I stated up front, for people like me it’s the long run on the cars that matters to me.

One of the things about cars like this, along with Maseratis, Ferraris, and so on, is that they are both instantly recognizable and also instant crowd pleasers. We took the car to the Irvine Cars and Coffee show at the Mazda R&D Center where my first instinct was to park in the spectator lot. After all, this is a new car and anyone with the cash or the guts can go and buy ten of the same one tomorrow. My compadre for the trip egged me on to head straight to the exhibitor parking instead, where the now two year old 991 attracted more than its fair share of attention from the crowd, to the point that when we went to leave we were stopped by two folks who wanted to engage us further in chatter about the car, to which we sadly had to reply that the car belonged to Porsche and not to either of us. 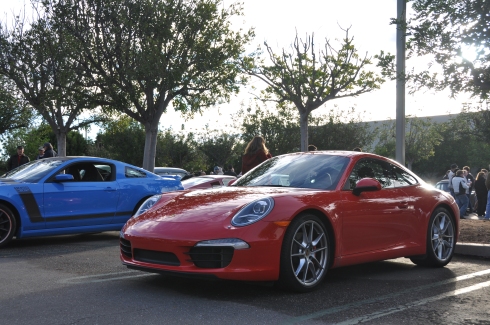 And that brings me to today. I reported last week about my most recent car shopping exploits that seem to have centered around things Porsche. Spending the better part of three days in this and other P-cars sealed it for me. I’ve been a Mercedes and BMW guy for years, not to mention Alfas and (of course) Miatas, but it’s time for a change. To the point, yesterday in the cold and rain I found this car: a 2000 Porsche Boxster in Speed Yellow with black leather interior. It was a single owner car that came with records of every single service since the beginning, and even a cover for garage storage. The thing is immaculate, and more importantly it has had the critical clutch, rear main seal, and intermediate shaft bearing services recently completed. So I did what any irrational car geek would – I put down my deposit and I will go and get it later today. Wish me luck. It may not be a 2014, but it’s a start, and maybe I’ll work up to a 991 of my own some day, or perhaps a 997 – I actually liked that car just a little bit better…