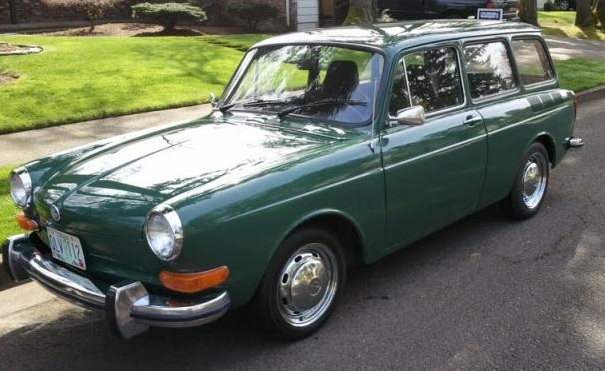 When I was in elementary school as an expat living in Hong Kong, I had a friend whose dad worked for the U.S. Consulate there. What I always envied about consulate kids, apart from their diplomatic immunity and ability to score Dr. Pepper by the case, was that the U.S. government would pay to ship their cars over there. It was all the more interesting to me as a young Car Geek because HK is a right-hand drive market, and those were left-hand drive cars. My friend’s parents had two station wagons, a late 1970s Toyota Corolla and an early 1970s VW Squareback. I always loved the sound and smell of old aircooled VWs, and I like the Squarebacks as more practical alternatives to the standard Bug.

As Jonathan, my partner in crime here at TTS likes to say, nostalgia is a funny thing, and from time to time I find myself perusing eBay or one of the several VW boards for squarebacks, fondly recalling that car from my childhood. It seems like the ones I find usually fall into one of three categories: rusted beyond all repair, extra crispy from too much time in the sun, or restored to the nines with an asking price about eight times what they cost new. This car surprised me – nicely restored, a little modernization, and an asking price less than $5,000.

Truth be told, I actually prefer the looks of the 2-door Type III Notchback to the Squareback, but those are far less common and even less practical, and I do so love my station wagons. I also prefer the 4-speed manual version to the 3-speed automatic. This car has the manual transmission going for it, even if the sheer pleasure of driving (and shifting) is not what the Squareback is about. Rather, it’s about the experience of running a (relatively) reliable classic car with classic looks, classic sounds, and classic smells. It’s about going to Home Depot on a sunny Saturday with the windows open and bringing home a load of plants. It’s about taking the kids for a long drive through the country and boring them to tears with stories about your childhood or (heaven forbid!) the “good old days”!!

By the photos it appears that the seller has done a very nice job fixing this car up, and I do not doubt his claim that he has substantially more invested in it than he is asking. The engine work is extensive and sounds as if it has been completed to a high standard, including new German-casting cylinder heads, pistons, rings and sleeves, and even a desirable modern Pertronix ignition. It also has new fuel lines (a very good thing as you know all too well if you’ve ever had a VW go up in flames…), spark plugs, exhaust and rear main seal.

The interior has likewise been done to what looks like a fine standard, even if it’s not original VW vinyl. The grey tweed upholstery looks right at home, and the pain job even included a repaint of the body-colored sections of the dash. The carpets and headliner were also replaced, so I’m figuring this car started the restoration process as one of those crispy ones. The panels look straight and the color is so much better than one of the many shades of tan offered by VW during the 1960s and 1970s.

Squarebacks in 1970 came with a 1600cc engine, so this car’s 1835 represents a fairly hefty upgrade. Performance figures are not available, but I’m willing to bet it’s still not exactly a rocketship, but should be more than adequate for regular driving, especially with the manual. Ultimately, this is a clean car restored to a nice quality and retaining a stick look – which is ever harder to find in the aircooled Volkswagen community. It’s a refreshing ride that someone should drive and drive until it needs its due for another restoration. Given the VW aftermarket, I’ll bet that all the parts will still be available.