The Mercedes-Benz W123-series cars were originally designed with two headlight configurations: the large rectangular high/low beam units with integrated rectangular foglights, and the flat faced big and little round-style version. Both came with replaceable halogen bulbs and configurations that did a fine job of illuminating the road ahead quite effectively. When tweaking the cars for the US market, archaic laws pertaining to things automotive required ancient (even then) sealed-beam units, so Mercedes adopted the proper flat-faced big and little design to the American market using a large sealed-beam high/low beam unit coupled with a replaceable halogen-bulb fog or driving light. The look was somewhat clumsy, and the effectiveness of the lights was even worse. 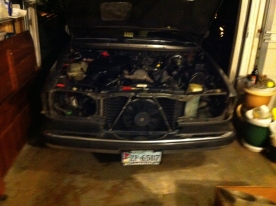 Fast forward 30 odd years and lighting laws have changed. Having owned more than a couple of W123s, one of the first jobs I perform after taking possession is a lighting upgrade. This can be accomplished in one of two ways: 1) installation of proper European-style headlamp units, or 2) installation of European-style 7″ replaceable halogen bulb lamps in place of the sealed-beams. Some people – many Germans, oddly enough – like the US-style and choose to just install better lamps while retaining the factory US-spec look. I’ve done that once, and it really didn’t so much for me.

My preference by far is the rectangular style European unit. The big and little Euro lights are becoming increasingly hard to source, and were used on lower-spec cars through about 1983, when all non-US market cars went to the rectangular units. The rectangular units can be sourced from any number of vendors and on eBay. The only real choice is whether you must have OEM Bosch or Hella units (at about $600) or you can live with aftermarket units. Were I restoring a car to top quality, I would go for the OEM units. However, at half the cost I have no problem going with aftermarkets for an average daily driver like this car.

This kit came from Adsit Company at a hair over $300 including shipping. It also came with new European corner lamps (they are more, well, orange) and the proper connectors. The European lamps use different wiring, so the connectors are a critical but remarkably simple part of the installation – even if I screw it up at least once every install.

The process is really rather simple. The first step is to remove the corner lights, accomplished by removing a plastic tightening wheel and then sliding them right off the car. The US-style headlight units are removed by first removing the surrounds which are held on with three more of those plastic tightening wheels, and then the brackets are held to the car with four screws. That’s literally it.

Installation, as they say, is the reverse of removal. There are two modifications that have to be made. First, the aforementioned wiring connector wherein you take four wires from the old connector and re-order them in a slightly larger one that fits in the European lamp unit. Second, there are two screw receptors that must be relocated to alternate locations (already provided) in the sheetmetal to accommodate the inboard screws securing the units to the body.

And that’s it. The whole process last night took me about 35 minutes, with periodic stops to take low-resolution photos with my iPhone. The difference in brightness is staggering, and with the standard 55/60W bulbs no further wiring modifications are necessary. It is possible to buy bulbs that would melt the paint off just about anything that gets in your way, but the better part of valor would have you install relays to handle the additional draw for those, assuming you don’t want to melt your wiring.

Next up? Some routine maintenance and addressing a transmission seep. Yes folks, it leaks. Just a little, but enough to probably get it banished from visits to my folks’ driveway.