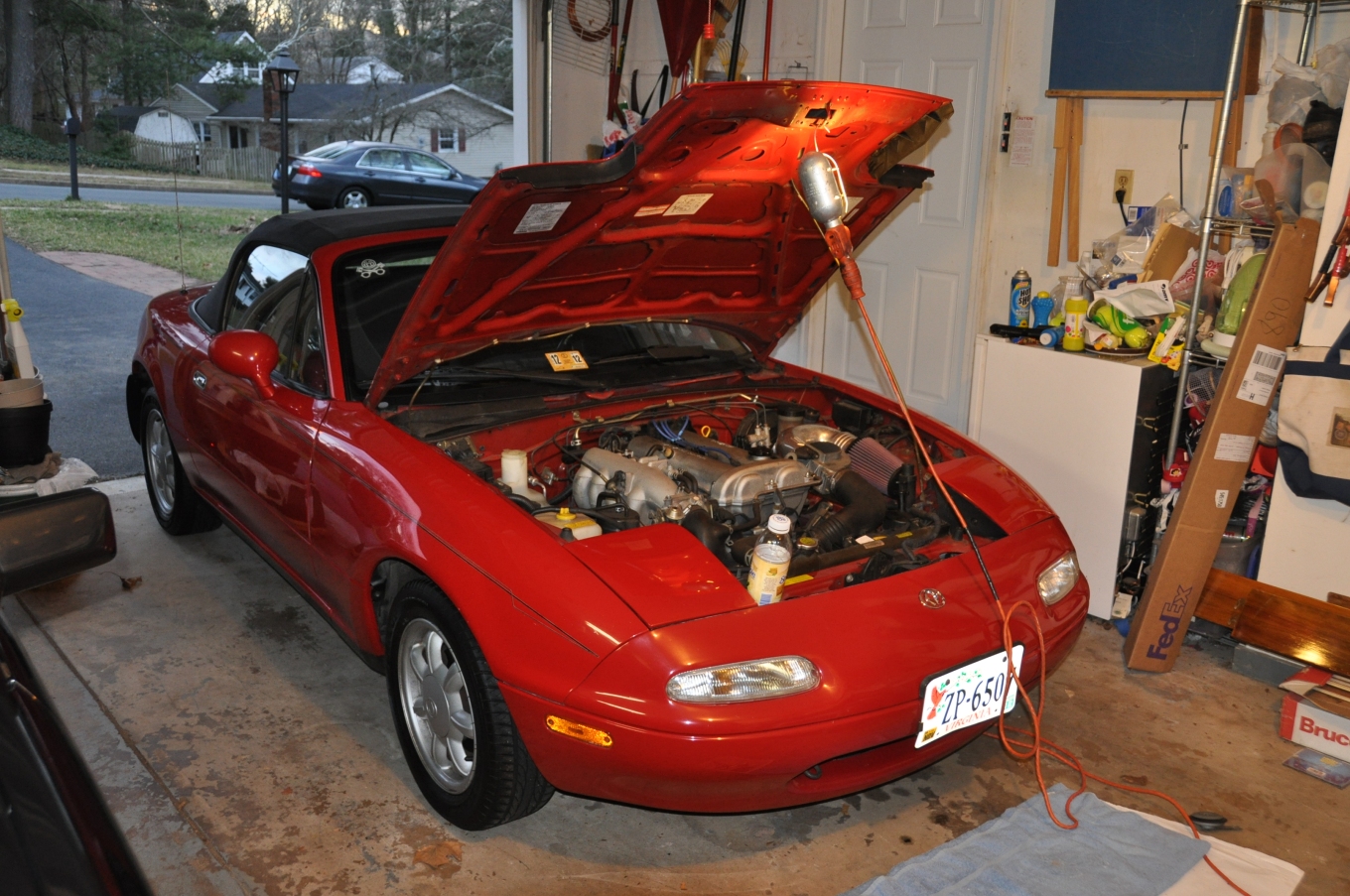 In sum the TTS team has owned four Miatas, and while each has had a distinct personality of its own (believe it or not), they all had one failing in common: their horns. Miatas came from the factory with a weak little “meep-meep” horn that car barely be heard over the radio of any car, including the Miata whose horn it is. So despite the fact that there is still a cockpit brace sitting in my garage waiting to be installed, today’s Garage Corner is all about being heard – in the interest of both ego and safety.

This is what the stock horn sounds like. Just sad and pathetic, isn’t it? So for this car I decided to purchase one of the many horns available on the extensive Miata aftermarket. In fact, I bought the horn kit that has been a part of Miata culture going back to before we bought our first in 1996: the Crazy Red Italian horns. This kit replaces the cheesey solo factory horn with a pair of air-powered trumpets that sound like they belong in a proper sports car. Since Miata owners have enough trouble convincing folks who don’t know any better that these are, in fact, real sports cars, we certainly don’t need the horn out of a 1981 Toyota Starlet making things worse. Instead, we need something with gusto that sounds like the factory system from something cool, something fast, something Italian!

Among the reasons that the Crazy Red horn kit has been so popular with the Miatisti over the years is that it comes ready to bolt in: no fabrication or alteration required. In fact, installation requires only one tool: a 10mm socket wrench with a short extender. I figured that even I could handle this job!!

To start, you remove the horn fuse from the fuse panel in the driver’s side footwell. To be honest, I never even knew it was there. You have to sort of lie on your back and look up behind the trim panels over the pedals. Next you remove the existing horn, which is easily accessed through an opening in the sheetmetal in front of the radiator to the left of the latch (facing the car), and held in by – you guessed it – a 10mm bolt. Then, for cars like mine equipped with power steering, you remove the bolt securing the power steering pipes to the sheetmetal in front of the radiator on the opposite side from the horn. Cars without power steering get off easy – the threaded nut for that bolt comes welded to the car, and the kit comes with a bolt just in case. 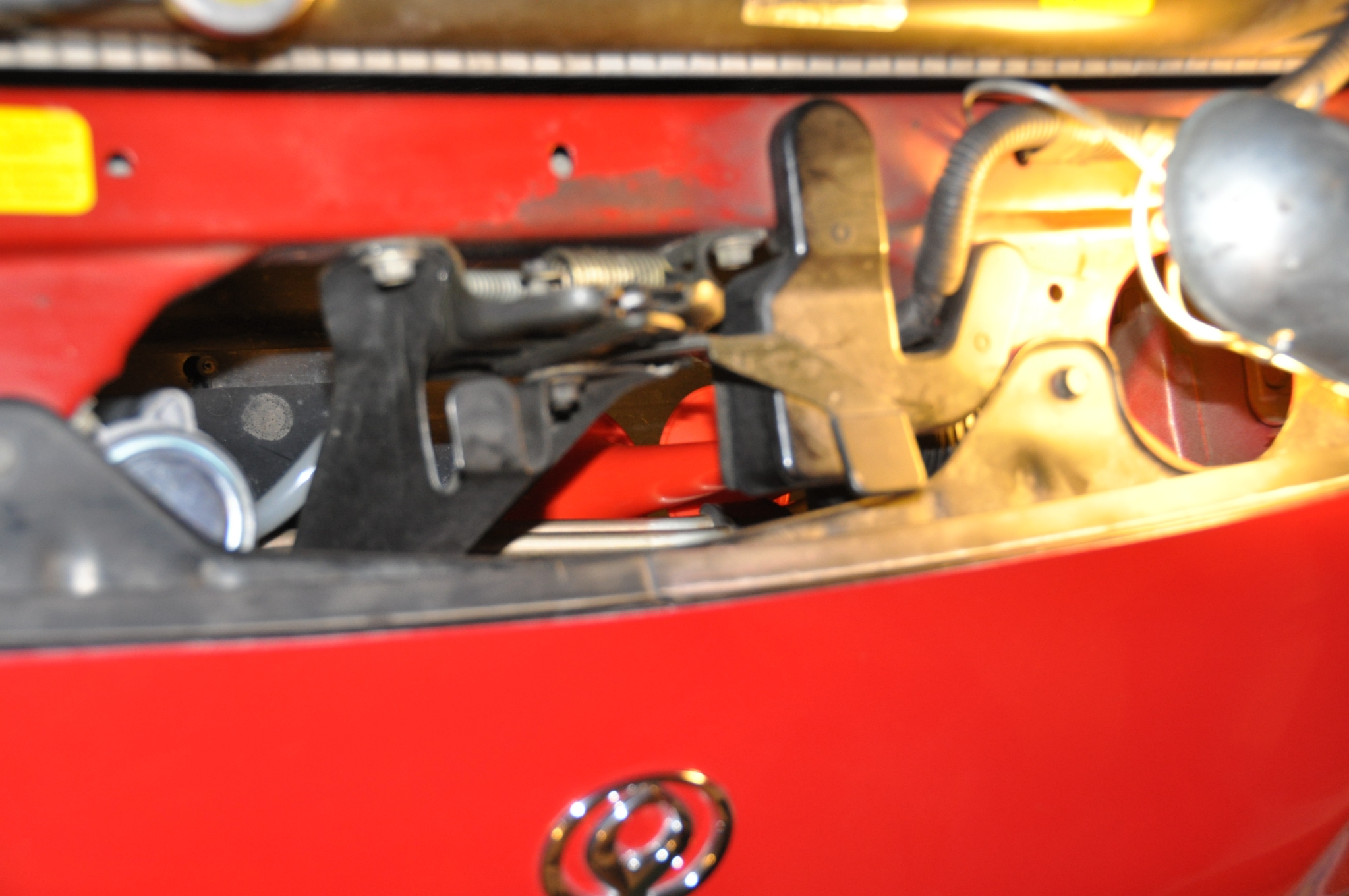 The next step is to feed the Crazy Red horns and compressor through the lower “mouth” opening in front, and you next secure the horns to the body using the bolt for the power steering pipes (along with re-securing those as well with the same bolt). Next up is the air compressor, which fits neatly in the spot once occupied by the stock horn. You then connect the positive lead to the compressor, and install a 20 amp fuse in the fusebox where you previously removed the 15 amp fuse. And that, as they say, is that.

Finally, here you can hear the difference that the Crazy Red Italian air horns make in place of the factory buzzer. At least now I’ve got a fighting chance of being heard over the sound of Rush Limbaugh or Taylor Swift. Heck, I may even want to just give it a blast once in a while for fun – preferably in a long tunnel.