To anyone who has visited our blog more than, well, once, it probably goes without saying that we like big stupid cars. I like them with big, gas guzzling V8 motors, all the creature comforts, and I am particularly fond of the big German ones that look like they belong to a master villain from some cheesey 1980s movie. Cars like this 1983 Mercedes-Benz 500SEL.

The real appeal of this car for me, however, is the fact that it is a grey market import with some unusual options here in the U.S. You see, for decades the German manufacturers have decided for us how American buyers want our big stinkin’ V8 cars equipped. Well, all of our German cars, for that matter. If you look through any mid-1980s vintage brochure for Mercedes, there were about 4 options: leather, velour (available at no cost but discouraged by dealers who pre-ordered cars without), sunroof, and heated seats. You had your choice of colors, too, but the palette was about 1/4 of what was available in the home market.

In Germany (and other world markets), however, the options list was comprised of pages and pages of accessories from the mainstream to the obscure. How about rear window curtains and a gasoline-fueled heater for when the car is not running? Or perhaps you’d like the highly-coveted and super-rare multi-function trip computer? You could have them all and more, so long as you bought your car in Germany as a grey market car.

The grey market was basically a number of importing companies who used loopholes in vehicle importation laws to sell cars bought through outlets in Europe, convert them to U.S. DOT specifications (mph speedometer, headlights, door reinforcement, side marker lights, etc.), although that happened to varying degrees depending on who was doing the work as well as who was inspecting it on behalf of the DOT. The less modified for the US market a car was, the more attractive it is now. The U.S. distribution arms of the manufacturers got angry about people being able to bypass them, and lobbied the Feds to make grey market importation much more strict, which is why we see it all but go away after about 1986-1987, save for a handful of cars that owners spent an awful lot of money converting, or anything over 25 years old. 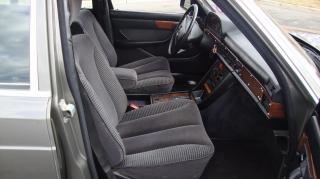 Among the non-U.S. accessories today’s feature car includes are: height-adjustable European headlights, headlight wipers, driver’s airbag, manual air conditioning (in place of the crazy-complicated vacuum-actuated automatic climate control), small bumpers, and country/city horns. Some of these were standard on some later cars, but were unheard of in 1983. Moreover, in 1983 you could not buy a 500SEL – the top of the U.S. model line that year was the 380SEL with it’s whopping 165hp U.S. EPA-strangled 3.8 liter V8. The European 500SEL, on the other hand, delivered 228hp and dramatically changed the character of the long-wheelbase S-Class from cruiser to bruiser. The following year, Mercedes-Benz made the decision to officially import a detuned 500SEL that didn’t perform as well as the grey market car, but was a far sight better than the earlier 380. It wasn’t until the 560SEL of 1986 that the U.S. market officially received a worthy top-of-the-line W126 S-class.

With 167,000 miles in 30 years, this car has been used somewhat sparingly. The velour upholstery is difficult to source for refurbishment, so the fact that the seats are all in good order is a huge plus. The chrome trim on the wheel arches is unfortunate, but unless it is hiding any rusty sins should be easy to remove. This car doesn’t appear to have been heavily altered for the U.S. market, since it still wears its Euro bumpers and headlights – a definite plus. The pictures also don’t seem to show any rust in the typical W126 places, such as where the plastic bodyside cladding meets the sheetmetal, as well as the rear quarters and under the front corner lamps. It would benefit from larger wheels if for no other reason than tire choices for 14″ wheels are rapidly decreasing. the 15″ alloys in the same style available from the Mercedes-Benz Classic Center would be a correct upgrade, but a lot of folks simply opt to install later 8-hole knockoffs available from companies like Tire Rack.

I’ll admit: I’m smitten with this car. It has just enough Euro-ness to be interesting to me, but at the same time will take an enthusiast to recognize it for what it is. A lot of people see cars like this as just another old Mercedes, but to those in the know it is just special enough and just nice enough to be an interesting daily or occasional driver. If I wasn’t so indecisive I may have just gone to Philly and bought it myself, but I encourage you to do that before me. Otherwise I just might.