For my money, the American automobile industry has produced very little that is unique or interesting since about 1969. Sure, that new Cadillac CTS-V Wagon is a little different, but beyond that..? If you look back, American cars had the stronghold on brute muscle. We weren’t refined, but we could power our way through everything. Hmm.. I guess you could say that about pretty much our whole culture, but I digress. In 1992 Chrysler, to just about everybody’s surprise, introduced what many considered to be a modern-day Cobra complete with participation from none other than Carroll Shelby himself in its development: the Dodge Viper. That the Viper ever made it past the show car stage was a testament to the fact that the Big Three can deliver, when the mood strikes them.

This low-mileage red example could very well represent an increasingly rare opportunity to get an “as new” Viper for less than the price of a new Camry. We think they’ll only go up in value from here.

The Viper concept was first introduced to the public as a prototype at the 1989 North American International Auto Show. Due to the overwhelming response from the public, Chrysler decided to put the car into production, and the production version debuted with Carroll Shelby behind the world as a pace car for the 1991 Indianapolis 500, sales started for the 1992 model year. Vipers were not cheap, and in the first year just 285 were delivered. That number skyrocketed to almost 3,100 by 1994, which was also, incidentally, the highest production of any year of any series of the Viper. Not rare by supercar standards, but not exactly your neighbor’s Civic, either. Chances are that the Viper owner is the only one on his street. 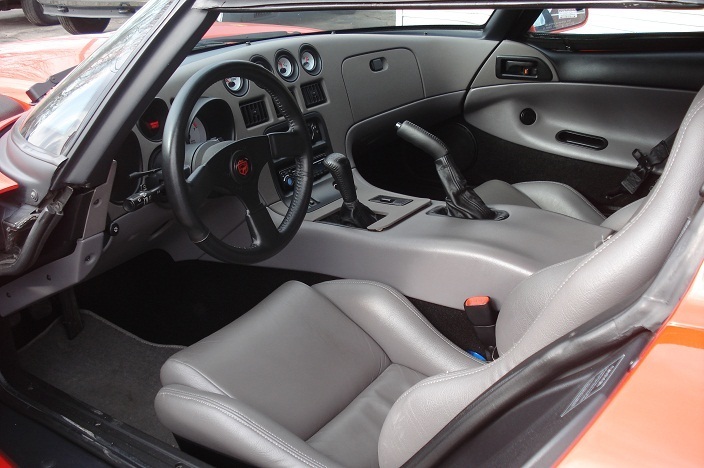 This Viper has just about 12,000 original miles on it, and the overall condition appears consistent with that. I would personally prefer a Viper in black, but those miles are hard to ignore. 1994 was the first year Chrysler offered AC in the Viper, and this one is so equipped. The car is startlingly original, and even still has its original top, side curtains, and tonneau cover. It does have an aftermarket CD player which is good from a practicality standpoint, but to the purist collector in the future will be a negative. There is no mention of whether the original stereo (if there was one?) conveys, but if not I’ve got to figure that they were Chrysler parts bin units that could be relatively easily sourced. Heck, they even used them in period Alfa 164s!

The pushrod V10 powerplant was based on an existing Chrysler truck unit, but with hands laid on it by the good fellows at Lamborghini who cast the block in aluminum and massaged it to the point that it developed 400hp and 465 lb-ft torque from its immense eight liters. No replacement for displacement, indeed – that’s American muscle for you! Coupled with a 6-speed transmission, the Viper could deliver 60mph in just 4.6 seconds from a standstill up to a top speed over 180mph. These numbers put it squarely in contemporary Corvette ZR-1 territory, and meant that it bested several European supercars at the drag strip.

For a modern car, the Viper driving experience is unrefined to say the least – it’s loud and rough but quick and ultimately satisfying. Bear in mind, the Viper is not about creature comforts and cosseting, but rather it’s about the art of driving a handful of a car, making an entrance and an equally impressive exit, and upstaging the Europeans and Japanese. Like I said before, we are of the opinion that these original Vipers are nearing the bottom of the depreciation curve and could be just the ticket for someone with space in the garage, a little cash to burn (very little considering what you get for the money), or who is just tired of sinking money into that Titanic of a 1980s Ferrari. You know who you are.