First off, and the more you follow our blog the more apparent this will be, but we LOVE station wagons. They are utterly useful, attractive, and generally less common than their sedan counterparts. Old Volvo wagons are among the best, especially if there is a certain image you are trying to convey: that of thoughtful college professor or high school English teacher, old school car guy who needs a hauler, or maybe Unabomber. . Given it’s condition, it’s probably worth every penny.

One of the things we love about the Amazon is that, while not fast cars, they have a strong rallying history. For the day, they were nimble handlers, the characteristics of which can be improved substantially with parts from old time Volvo tuners like IPD. This car being a 4-speed manual is also appealing, and while shifting is a little truck like, the gears are generally easy to find and the trannys are quite robust, like most things on old Volvos.

Amazons are also quite competent on the utility front. While they may not be able to haul a full 4’x8′ sheet of wallboard, they are roomy enough to carry all of the junk your family insists on bringing on a weekend trip. It can also hold copious amounts of spare car parts for a long weekend at the track. The seller talks about it being agreat car for the Lake Home. I wonder if that comes with…? I’d like to have one of those. 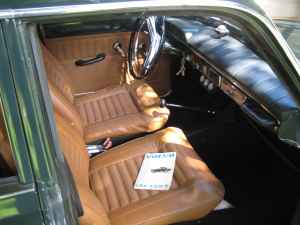 For the family Car Geek who has to rationalize everything to their better half, these cars were impressively advanced from a safety perspective for their day. As the seller states, they had lap/shoulder seatbelts, collapsible steering columns, rear seatbelts, advanced braking systems, and even door impact beams. There’s absolutely no reason the whole family couldn’t enjoy this car on a regular basis. Excepting bad weather – particularly snow in areas where salt is used. You know as well as I do that rustproofing in 1967 was virtually non-existent, and Volvos of this vintage were extremely susceptible. The seller doesn’t speak to the rust issue, but hopefully having been in enthusiast hands it has been well-kept.

In addition to the bulletproof transmission and motor – which as you can see is remarkably easy to access, this car benefits from an electronic overdrive. The motor has also been rebuilt to modern standards, but it is not stated when or how many miles ago. With only 70,000 miles, it probably wasn’t that many miles ago. Time could be another story, though. Altogether, this could be a great car for the family looking for a unique and fun classic to bomb around on nice weekends. Or for the more ambitious it could be a daily driver for someone – ideally in a dry climate.