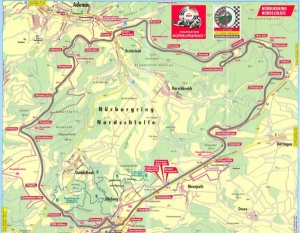 My cohort Reed is in Germany this week visiting the holiest of hallowed grounds, the Nürburgring. He’s travelling with fellow car goon Dan Trent, a scribe in England for PistonHeads.com, who has arranged the transportation in the form of a new Porsche 911 Carrera 4 GTS. I’m not sure what that is, but it sounds fast. And expensive. And fun. Even if the steering wheel is on the wrong side.

In 2008 Reed was banned from ever again renting a car from an international agency whose name begins with an “S” because we took their BMW 525d Touring for a bunch of laps on the ‘Ring. Life banishment isn’t really out of the ordinary; several if not all rental companies have paid spies lurking around the ‘Ring watching for rental rides.

I’m not there, and I’m trying not to be unhappy about it. To occupy my mind from things like schnitzel, sausages, and 14-mile laps, I’m thinking about a short list of cars you could just buy in der Vaterland and head directly to the ‘Ring. I mean, why risk the wrath of some anonymous computer when trying to rent a Mustang convertible in Ft. Lauderdale because you took your Opel Astrocolon on a public toll road some 4,700 miles away?

Imagine you had a small- to medium-sized pile of money to spend. I know, but bear with me. You’re shopping for something with some racing pedigree, whose heart was proven in battle. You don’t need or want outright speed. You want something with balance and a soul. A momentum car in contrast to today’s Corvette ZR1 or Nissan GT-R. A ride that will reward you for smoothness and style, rather than jab and stab brutality.

Perusing online classified websites in Germany, you’re about to buy one of these.

This car was practically born on the Nürburgring. If you need to know what the E30 M3 is, what it has accomplished, or why it has achieved cult status, I would direct you to Google. The M3’s long list of wins and the lust it engenders in the devoted is beyond the scope of this blather. I don’t count myself as one of the devoted, but I do know the combination of light weight, perfect balance, and crazy high-RPM power would make anyone with an ounce of car geek blood in their veins grin ear-to-ear long before they arrived at Adenauer Forst.

We like the gray 16-inch Evolution wheels and the clean presentation in classic silver on black. The upgraded steering wheel and shift knob are correct for the car. At a little over 80,000 miles, you should have some time before anything catastrophic happens. The new tires and brakes will help on the track. With an advertised 215 horsepower, there are definitely some other Evo bits under the hood. A sure winner, even if you’re just running down hot-rodded Golf GTIs.

Alfa Romeo GTV6
There used to be a vendor near the ‘Ring renting Milano sedans (the 75 in Europe, and really just a GTV6 with four doors), so they must be a party, right? The near perfect weight balance and the 2.5- or 3.0-liter V6 wailing ahead of you would probably render your morning coffee moot. When these cars were new, you’d be let down by the vague shifter connected to the transaxle; since you’re buying used that surely would have been addressed by now. Would the GTV6 break before your day was over? Maybe, but they can be pretty stout when sorted. Besides, at a fraction of the price of the M3, you’d have euros left over to haul its burning carcass back to the nearest Alfa specialist. 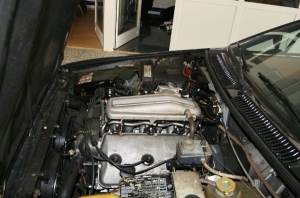 This is a 3.0-liter, 189 horsepower version, and while not as pretty as some of the 2.5-liter cars advertised, the extra grunt will look great from behind the fat steering wheel. In the States, the Recaro sport seats are usually trashed. These velour-covered chairs are gorgeous and should keep you in place pretty well. The ad says the car is well-maintained and the tires have some meat left, but the real question is the timing belt. If it breaks, not only do valves meet pistons in this engine but every other Alfa Romeo motor in a 500-mile radius. Rust is the other main concern, as the track officials would be rather upset if your car broke in half through the Karussell.

Mercedes-Benz 190e 2.3-16 / 2.5-16
The arch-enemy to the E30 M3, these Benzos were a force in the German touring car wars. Not quite as butch as the M3, this four-door saloon nevertheless mixed it up on racetracks all over the world. A free-flowing Cosworth cylinder head lived on top of the Mercedes block and the rest of the car was fortified appropriately – glued-down suspension, sports seats with aggressive bolster for all four passengers, and a row-your-own close-ratio dog-leg 5-speed (an autotragic was optional, but we won’t discuss that). The body kit was more subtle than the M3’s, giving it an anonymous presence as it blew passed you in the left lane or on the outside of the Flugplatz. 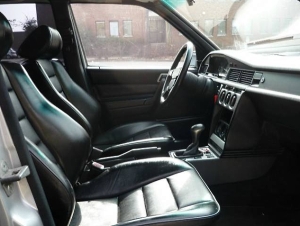 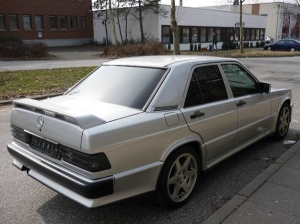 The ad is pretty typical of what we’d find in a US Craigslist posting – the seller lists the standard features with little about on this actual example. But whatever. The car shows as a nice Evolution 2.5-liter, again in classic silver on black, with 224 horsepower and a 5-speed. While I prefer non-smoked lights on a light-colored car, this car has just such a Euro look to it. The rims on it are optional for added cost, but I’d say leave them on there since they look fantastic. The aftermarket Momo steering wheel is a matter of opinion, but for my lunch money I’d rather have the original. Aside from that, the car absolutely looks the business, and with no indicated backlog of repairs needed, not to mention Mercedes legendary build quality, you should be able to get lots of laps in without too much worry.

So there you have it. Stick it to the rental agencies and their worldwide databases. Simply buy a Rennwagen for the street and have at it. You’ll have a lot more fun, especially if you were previously driving a 525d Touring.

4 thoughts on “Buying vs. Renting at the Nürburgring” Leave a comment ›

Totally That Stupid – Car Geekdom, and a little bit of life. Buying vs. Renting at the Nürburgring
Loading Comments...
Comment
×