Inspired by the Mercedes-AMG Hammer, in the late 1980s German luxury carmakers made it part a priority to develop super-sedans in a race for power that continues to this day. The original manufacturer-developed cars were the BMW E28 M5 and the Audi 200 Turbo Quattro. They were quick machines, but rough around the edges – a little too hard for many drivers. The Audi S4 was part of the better-developed second generation of these family-oriented supercars and competed with the BMW E34 M5 and the Mercedes 500E. Both the BMW and the Audi were available with manual transmissions, while the Mercedes was not. The S6, however, had a further distinct advantage: all wheel drive. .

The S6 took the attractive but rather ordinary Audi 100 and injected it with the 227hp 2.2 liter 20 valve turbocharged motor from the 1991 200 Turbo Quattro. It was available only with a stick shift, and was good for 0-60 sprints in just six seconds. Terminal velocity for the S4 was in the mid 140s – more than enough to elude the local constabulary, if you’re good. The other changes from the base 100 included a sport interior, special headlights with integrated driving lights, white gauge faces, and unique lower-profile alloy wheels. The Emerald Mica green exterior of this car was all to familiar among German cars from the time, but it is nicely complemented by the Ecru leather interior which appears in remarkably good condition – most of them are cracked and worn. The extensive gauges extend across the dashboard in a very cool cockpit-like layout, and we are fans of the early S4’s antilock brake override button and console-mounted AWD differential lock. 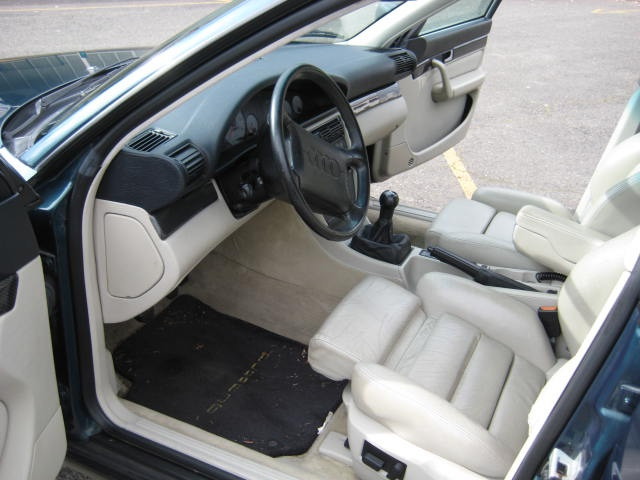 While most performance cars are about driving fast and mastering the powerslide, the AWD S4 makes the driver want to join the World Rally Championship and hit the dirt roads. These cars are all about speed with grip – a concept pioneered by Audi with the original Quattro in the early 1980s. The car begs to be pushed to the limit around every corner – and the worse the road, the better the challenge. Bring on the snow, the ice and the dirt!! This would be a hell of a car to take on the Pike’s Peak Hillclimb.

Audi’s inline-5 traces its roots back to the 1970s, and by the time the S4 came along had been pretty well sorted. Key considerations when looking at one of these is a solid maintenance history hopefully including a timing belt replacement. This car has both of those, although the timing belt has about 60K on it, so the next owner may want to replace it again sooner than later, at least in the next 20K miles or so. It also has European-spec taillights which do a nice job of distinguishing it from other S4s. It also has Euro headlights, carbon fiber dash inlays, and the 1993-only cold weather package. The bottom line on the S4 is that it is a rare performance sedan for driving enthusiasts in the snowbelt, or who just want to get out and see just how well it will stick. If you elect to buy one and test its limits, don’t blame me.